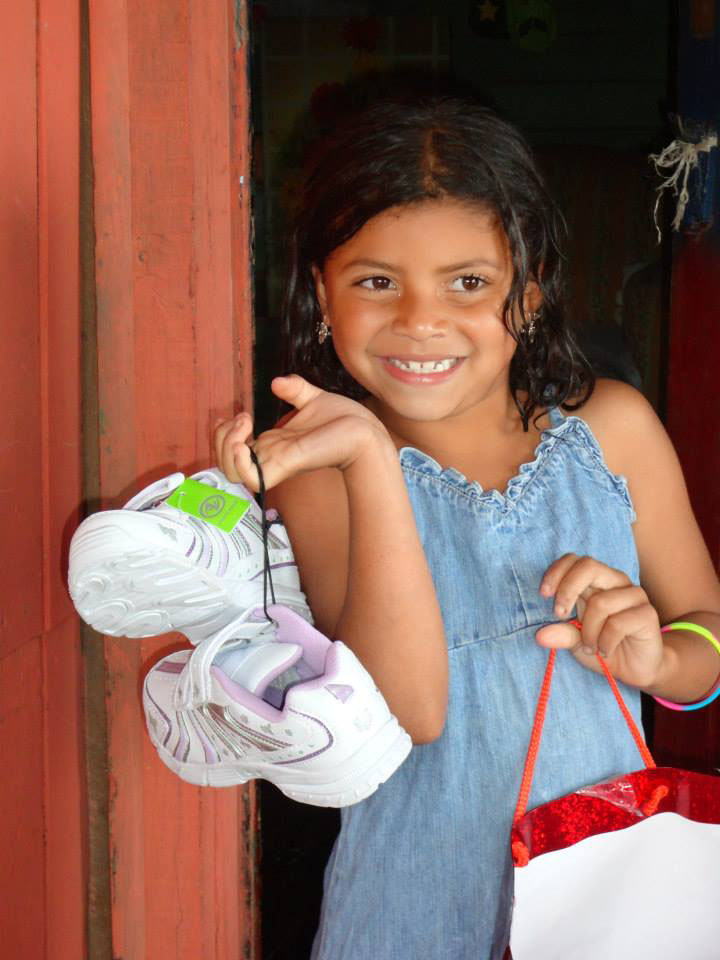 Soles2Sarchi is a group that emerged from another organization called Duke of Edinburgh which sends high school students to Costa Rica, and sent three Laurier Brantford students over the summer of 2014. Kelsey Anger, the coordinator and chaperone of the Duke of Edinburgh, Cody Groat, Asha Mistry, Angela Braun and to a lesser extent Zoe Zrini, who joined the group in Costa Rica, after participating in the organization, saw the need for shoes in Costa Rica.

“One day I noticed that these two sisters, Maybelline and Cassandra were never in school at the same time. After asking the principal, he told me to pay attention the next day. So I did. Cassandra would come in the morning and Maybelline would come in the afternoon. I then realized that they were wearing the exact same pair of shoes because they only had one. It was that moment that I realized this was not okay and something needed to be done.”

This year, the shoeboxes are being sent to Escuela Sabanilla. Once a student decides to participate in Soles2Sarchi, they are assigned to an elementary student in Costa Rica. They are then given a picture of their child with their shoe size, along with a list of items to put in the shoebox and a place to drop it off. In August, the three students will return to Laurier Brantford and give pictures of the children opening their gifts and a heartfelt letter of thanks written by the child.

Upon meeting Kelsey Anger, her passion and enthusiasm for the project was evident, “Costa Rice changed my life” said Anger. “I’ve been friends with Kelsey since first year, and her experiences in Costa Rica brought out a passion in her that was never really seen when she was talking about anything else,” said Groat. Anger lived in Costa Rica for 2 years after high school and taught English for three months. “It totally changed my life,” said Anger. It also helped her choose her major in human rights. Anger explained that most Costa Ricans are immigrants from Nicaragua, and that they come to work for $1 a day in the coffee bean industry. The government of Costa Rica pays for the students’ education up until grade 6, after which their education is paid for by their parents. Teachers in Costa Rice have to pay out of pocket for any and all supplies they need for their classes including art supplies, scissors and extra pencils, in case any of the children forget theirs.

During the holiday season, there are a number of charities that send shoeboxes and other gifts to other countries and even in Canada.  “We are not only told that these are the children who would benefit the most and have to believe it, but Kelsey and I have had boots on the ground and witnessed first-hand that this is the case. A group like this provides direct, personal channels to impoverished global situations.”

Anger also expressed her gratitude towards the Laurier Brantford community including the Dean of Students, Adam Lawrence. Anger was able to get 50 students to participate in her first year. This year, she has another 50 students and faculty participating and a large number of people who still wish to participate. Generic girl and boy boxes will still be accepted, along with baby boxes with bottles and bibs. Anger’s hopes to create a club at Laurier Brantford that will allow this event to continue every year. If you are at all interested, check out the Soles2Sarchi Facebook group and email Kelsey with any questions at Kelsey.anger@hotmail.com