The Path to Presidency 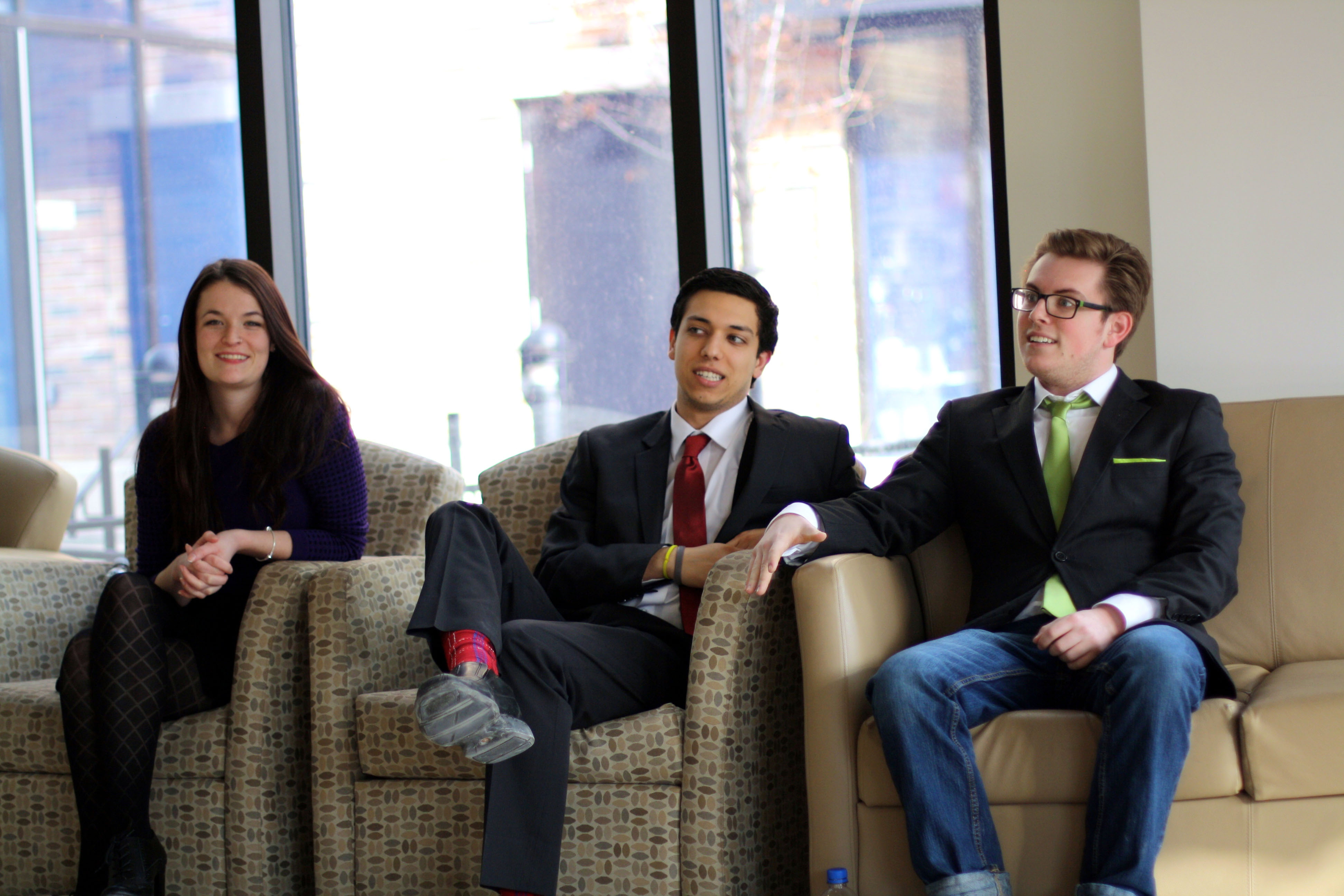 Laurier is my home. Four years here has changed my life. Four years in University Affairs, including being Coordinator, 3 years on Senator, the Gendered Violence Steering Committee, House Council, IceBreaking, everything. It has all been amazing.

I want to phase out the hiring system STARR. I do not believe it properly prepares students and it restricts them from volunteering. We need increased safety by better funding ERT and Foot Patrol as well as advocate for 24 hour SCS in Brantford. I also want to introduce Association Visas so that students do not have to worry about a large financial burden.

The President is an advocacy based role, I have spent my last four years advocating for students. I would love nothing more than the opportunity to give back more.
Please check out my platform at www.frankforpres.com, as well as my facebook page at www.facebook.com/

The Students’ Union is only as strong as its students, volunteers and partnerships. There are three main foundations that drive my vision for the future as your President of the Students’ Union.

I will build and strengthen our relationships with other university departments, which will enhance the student experience across both of Laurier’s campuses.

I will engage and connect with the student population as a whole in order to truly represent and advocate on their behalf.

I will help volunteers get the most out of their experience by reducing inefficiencies and appreciating them, while continuing to provide high quality programming and services for all students.

I’ve spent my Laurier career building relationships that matter and I truly believe that the focus of the Students’ Union should always be collaborating with student voices because we are better together. To see my full platform, check out www.oliviaforpresident.ca and remember to vote!

The student election is only a few days away, and the WLUSU presidential candidates are doing all they can to guarantee their position as president. Each candidate has been given the opportunity to work with Wilfrid Laurier University, and help students get the most out of their time at the university. There are currently three presidential candidates; Olivia Matthews, Dave Patterson and Frank Dominic Cirinna. The candidates are prepared to proceed with their plans to help improve students’ experience on the campus, as well as resolving other issues involving the university.

One of the priorities of presidential candidate, Dave Patterson, was to improve the mental and physical health of students. Patterson’s knowledge of dealing with mental health came from working with the Mental Health Education Group. With this experience, Patterson hopes to develop peer driven support on campus. The peer help line will be an issue that Patterson will work on to assist students with mental health issues.

Patterson understood that the Student Life Levy, and other faculty associations, will benefit students in the future and therefore stands behind its development.

“As far as Program Associations go, they’re really important. They allow the Student Union to have reach into pockets of students, and also spread the net of student engagement for students who are here for a variety of reasons, and programs,” said Patterson.

Furthermore, Patterson turned his attention towards tackling the WLUSU debt. He mentioned that there are plans put in place to rid WLUSU of its current debt.

“We have to try and make sure that we are providing the highest quality program, while maintaining fiscal responsibility,” said Patterson.

Student engagement was a subject that Patterson will focus on as well. The value in volunteer positions is something Patterson will try and bring to the attention of students. Patterson touched on the importance of students being knowledgeable about extra-curricular activities, and the positive affects it can have on them. Patterson will be working with the Student Union to captivate students, and make volunteering a beneficial experience for them.

“You need to view it as something students want to do because they see the tangible value in it,” said Patterson.

In regards to Laurier’s sexual assault policy, Patterson feels that communication with students and professionals can help end sexual assault. Patterson sees it as a responsibility to push the voice of students that want to feel safe on campus – along with the help of the Diversity & Equity office.

“I think transparency. Improve transparency. The more we can tell WLUSP about what WLUSU is doing, the more the students hear it and the value in that is endless,” said Patterson.

Patterson plans to work with external sources to allow for Special Constables Services to be available to students, 24/7. Safety on the campus area has always been an issue for students. One of Patterson’s goals will be to keep buildings open for longer, so that students can access them at late hours.

In regards to meal plans, Patterson aims to help Laurier Brantford create “mandatory meal plans” and help bring a dining hall for students. Patterson strives for better food on campus for students, and will work on providing better dining services.

Presidential candidate, Frank Domenic Cirinna, believes his extra-curricular experience can give him the upper hand in the election. Cirinna has involved himself with marketing and managing experience throughout his time at Laurier, as well as three years as a Senator. One of Cirinna’s priorities will be to help improve parking services for students by terminating the Re-Park By-Law.

Cirinna knows about the impact that the Student Life Levy has had on the Waterloo Campus. He believes that the Brantford campus can also be affected positively once SLL has been introduced.

“Brantford would be excited about the Student Life Levy if they saw what Waterloo has done,” said Cirinna.

The WLUSU debt remains an issue for all candidates. Cirinna was honest about his stance on the debt. He does not think much can “change the debt problem” because plans have been made to tackle the debt. Cirinna mentioned that payments for the debt had begun three years ago, and that minimum payments were being made.

Furthermore, Cirinna believes that marketing and social media are key components in helping to raise awareness about volunteer positions at Laurier.

“That’s why it’s so big at the Waterloo campus because one person does it then their roommates see it and apply for next year,” said Cirinna.

Cirinna is part of the Gendered Violence Steering Committee, and believes that his involvement committee will help put a stop to sexual assault.

“I’m on the Gendered Violence Task Force and I am also a member of the Waterloo Regional police task force. Safety is my number one priority,” said Cirinna.

In regards to WLUSP and WLUSU, Cirinna uses honesty as a factor that can build a connection between these organizations. Cirinna mentioned that WLUSP and WLUSU were working better than they were in the past, and that its development will continue to take place.

Cirinna’s stance concerning safety involved resolving the issue of parking, and helping to put more safety poles around the campus. Cirinna believed that putting more safety poles would decrease crime rates. He added that he would push for Special Constables Services to become 24/7 in Brantford. Due to the fact that it would not cost the SCS or WLUSU any money, Cirinna believed that this subject needed immediate attention.

“We have this on the Waterloo campus and there is no reason not to have it here. Students need to feel safe 24/7, every day of the year and not just when they’re in operation,” said Cirinna.

In addition, Cirinna plans to work with the University Affairs office to dismiss the Re-Park By-Law. He felt that students had a tough time with parking, and that terminating this regulation would benefit students.

“Brantford has a lot of students and they’re dependent on Laurier. Why are they making it harder on students? They should be more accommodating to students,” said Cirinna.

Presidential candidate, Olivia Matthews, detailed her future plans for Laurier, and the changes she would be able to bring.

In regards to the WLUSU debt, Matthews explained that debt came from poor management of funds. As president, Matthews would avoid the cutting of Central Services budgets, and look towards cutting other costs. In addition, Matthews plans to make sure that the WLUSU budget plans fall through.

“At the end of the day, my stance on the budget is that we continue with this plan to get rid of the debt. However, not at the expense of students,” said Matthews.

Matthews pointed out the importance of the university and union working together to improve safety. Extending the hours of the Special Constables Services is an issue that also concerns Matthews. She understood that students will be out late, and that the SCS would need to stay open later for students.

“With that improvement of 24 hour Special Constables Services, I believe we can extend the hours of Foot Patrol here,” said Matthews.

Matthews also spoke about her plans to let students know about volunteer positions at Laurier. She plans to send out monthly emails to students that include information about WLUSU’s accomplishments. In addition, Matthews intends to create a Google Calendar of events so students can stay updated. Matthews felt that the enhancement of volunteer experience was necessary, and that volunteers ought to be appreciated more.

“If volunteers feel that their voices are heard and that they feel appreciated in the hiring process, they will keep coming back to volunteer,” said Matthews.

As president, Matthews will work with the Diversity and Equity office and Gender Violence Task Force to prevent sexual assault. In addition, Matthews intends to properly train all volunteers involved.

“I think the response should be to always be in support of the student voices who are speaking out against it,” said Matthews.

Furthermore, Matthews believes that WLUSP and WLUSU need to have an “open line of communication” to strengthen their partnerships. Matthews pointed out that getting out information to students is the most important thing, and that these two organizations need to work together to make this efficient.