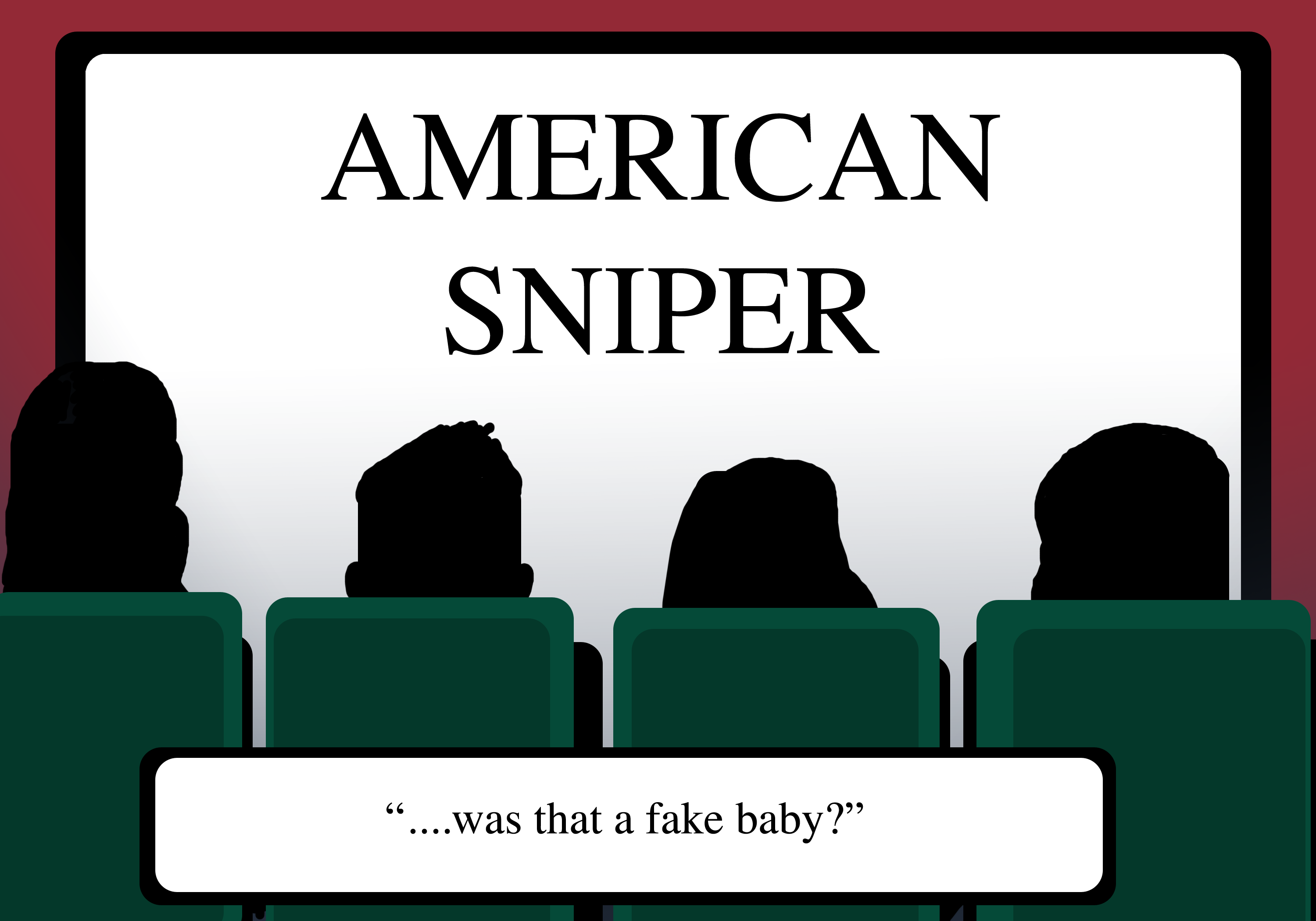 American Sniper has come under a lot of fire lately (my comedy career hasn’t lifted off the ground yet).

Whether it is making fun of the ridiculous baby, the hammy acting, the awkward pacing or outward obstruction of the source material, there is a lot to make fun of and point out. While it is healthy, and if you ask me, outright wonderful that people are questioning what they see in movies and TV nowadays, it must be asked if we are being too hard on director Clint Eastwood? How much is a director allowed to botch the source material (artistic interpretation) before it gets offensive and ridiculous? Apparently, American Sniper crossed the line, and people aren’t completely wrong.

Where do I even begin? The baby seems fitting. There have been joke after joke about this stunt (my personal favorite being the Million Dollar Baby parodies), and they are well deserved, however this does have a explanation. On the one hand, the laws in California (where part of the movie was filmed) regarding child actors, specifically babies are very strict. A child must be at least 15 days old, and any child under six months old can only be on set for two hours a day. Furthermore, the hours a baby is allowed to be on set is from 9:30 a.m. – 11:30 a.m., and 2:30 p.m. – 4:30 p.m. and one studio teacher and one nurse always have to accompany the child. The laws however are no excuse, but the time schedule is. They had two baby boys lined up for filming. Child #1 had a fever that day and obviously couldn’t participate, and child #2 never showed up (he should get a better agent). In typical Clint Eastwood fashion, he improvised, and gave the actors a mechanical baby as a stand in. It was an unfortunate circumstance and ultimately the actors did the best with what they were given, which wasn’t a whole lot, but that doesn’t mean it didn’t get a rise out of multiple audiences.

Now the second big problem with the movie is the script, and the liberties (oh the liberties). To be fair, Eastwood chose both an excellent and extremely difficult persona to covey into a movie. Chris Kyle was a complex, very opinionated man, stating in his book that Iraqis were savages and wanted all Christians dead, and that he enjoyed killing them. Admittedly it is hard to write a subtle character with that source material; it’s an all or nothing scenario. Adding to the difficulty, Kyle got into events that are beyond the realm of speculation such as killing two carjackers and getting a pass from the local law enforcement, and shooting looters from the New Orleans Superdome in the aftermath of Hurricane Katrina. Eastwood decided to tone things down, giving the character of Kyle much more remorse after killing, and making him visibly shaken when he returns home from his term. He still has the strongly rooted religious views of Kyle, joking that he was killing savages, however he offered much more remorse than the man himself was reported to. Furthermore, one of the antagonists of the movie, the enemy sniper Mustafa, was not a big part of the original source material. In fact, Mustafa warranted two sentences of the memoir itself.

“When it becomes a whole different story is when [artistic liberty] goes too far.” said Daya Williams, a first year Child and Youth Studies student. “I don’t think they have the right, I think they’ve given themselves the right.”

“Overall I liked it, it was a pretty good watch. Any Hollywood director that gets hold of a story that’s a biopic they always throw in stuff to spice it up. They’re going to take out all the dirty dark things that they don’t necessarily want people to know about, then they sprinkle some Hollywood magic on it.” said Bryce James, a first year Journalism and Digital Arts student. “They dazzled it up a little bit, but that’s why you go see movies anyways.”

Of course, the whole kerfuffle with Seth Rogen doesn’t help things at all. Seth Rogen’s tweet: “American Sniper kind of reminds me of the movie that’s showing the third act of Inglorious Basterds.”. Take that as you will, but many people took that completely wrong way, taking it as Rogen insulting their country rather than offering his opinion on the movie. Alec Baldwin came to Rogen’s rescue however, diverting the heat and ultimately turning the thing into a joke.

There is much debate among critics, as there should be. Some argue that the pacing between Kyle’s terms is awkward, and brings the action parts to a grinding halt, while others argue that it is necessary for the movie and for Kyle’s character to be three dimensional. Some argue that the film should not have all of the nominations it currently has, the one under most criticism is the nomination for Best Picture. Personally, I think the point of cinema is to get people talking and American Sniper has been doing exactly that.