The job reality for Laurier 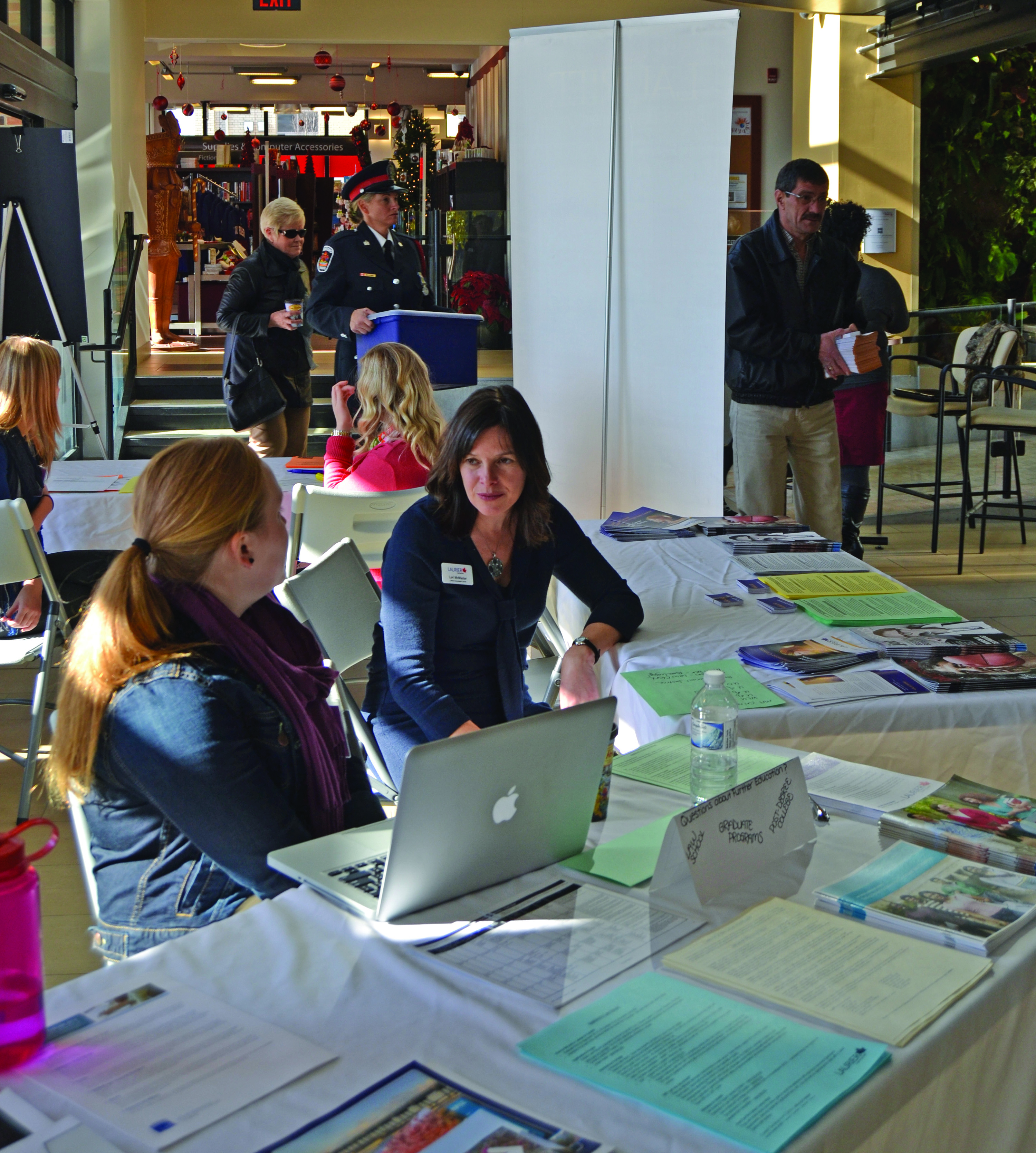 The ‘Careers in Criminology Fair’ took place last Thursday, November 15, in the RCW lobby with a high turnout of upper-year Criminology students, alongside a medley of senior students from other programs. Information booths were set-up by employers ranging from policing, fraud investigation, probation, and grad programs, etc. For many students, it was the beginning of the daunting task of seeking employment after graduation.

Attending the Careers in Criminology Fair was Lori McMaster, a career consultant at Laurier Brantford’s Career Centre, who welcomed students to the job fair. McMaster and her department help assist Laurier Brantford students and alumni (services are offered lifelong, free of charge) in finding careers after graduation.

McMaster sees a fair amount of students getting into the job hunt late in their undergrad or not until after they have graduated.

“Sometimes [students] don’t come and see us, while they are here at all. Then they graduate or are graduating in a month and are thinking ‘now what?’ We see them in the spring and summer and they start doing career exploration, networking, informational interviewing (interviews of people in professions of interest), making resumes, and then embarking on a career,” says McMaster.

A recent hot topic story in national magazines and newspapers has been the portrayal of a bleak outlook for university graduates and their prospects entering the workforce. In a recent issue of The Walrus, the front cover story was “Today’s University Graduate: Unemployed, unhappy and drowning in debt.” This provocative article, co-authored by Ken Coates and Bill Morrison, points out that Canadian universities are producing 254,000 graduates each year, and out of these students who are not going into trades or graduate school, those who are choosing to enter the workforce are finding it increasingly difficult to find “paid employment or, increasingly, accepting unskilled, low-paying jobs to stay afloat.”

The Career Centre’s research on the success rate of alumni employment through a Graduate Survey Report can help shed light on whether Coates and Morrison’s article is reflective of the prospects of Laurier Brantford graduates. Although not as extensive as the Waterloo campus’ surveys, as Brantford only has 2,445 alumni from several graduations, there is still a lot of data in the last few years regarding graduate pursuits.

McMaster and other career consultants at the Laurier Career Centre in Brantford and Waterloo assist graduates who find themselves unemployed.

“When making follow-up calls [for the Graduate Survey] and we come across someone who is unemployed, we tell them about Laurier’s lifelong career services. Some students and alumni don’t realize this and are using community-based career services that tend to not be as helpful for university grads or they are paying to make a resume or to hire a career consultant,” said McMaster.

The average salary, which was only calculated from 30 of the entrants who disclosed their salary, was $34,283. This is a significant drop from the average salaries of 2009 and 2010 which had averages of $39,800 and $36,582 respectively. This shows what appears to be a drop in the average salary of graduates. However, this in no way shows a real average salary of the majority of students each year who are getting employed after graduation, because only a select few of the respondents are actually disclosing their salary.

McMaster explained, “Not everyone wants to give out their salary information, that data is voluntary.”

The low amount of respondents disclosing their salary may suggest that the actual average salary for graduates from Laurier Brantford who enter the workforce is lower, as it is more likely that someone paid a lower salary would be less forthcoming of disclosing their income.

“When looking at it anecdotally from my [experience] I have seen when [students] are looking at further education there are a number of people who are choosing it because that’s what they want to do. If they want to be a lawyer then they know they have to go to law school … some people are really passionate about wanting to pursue further academic studies and then there are some people who don’t take any time through their undergrad to figure out what they want to do and then say ‘they might as well go on to grad school,'” said McMaster.

“Do I think that people can go out into the work place after getting an arts degree, absolutely. But what I think is happening is that in a lot of cases grads are not connecting with us … for an arts, and other majors as well, [career options] are really wide-open. So [some students] coming out with a Contemporary Studies degree or English degree don’t have it all figured out, that’s fine,” said McMaster.

“[However,] I believe if students do some exploratory work and thinking about a job after school, they can then make that school-to-work transition much smoother.”