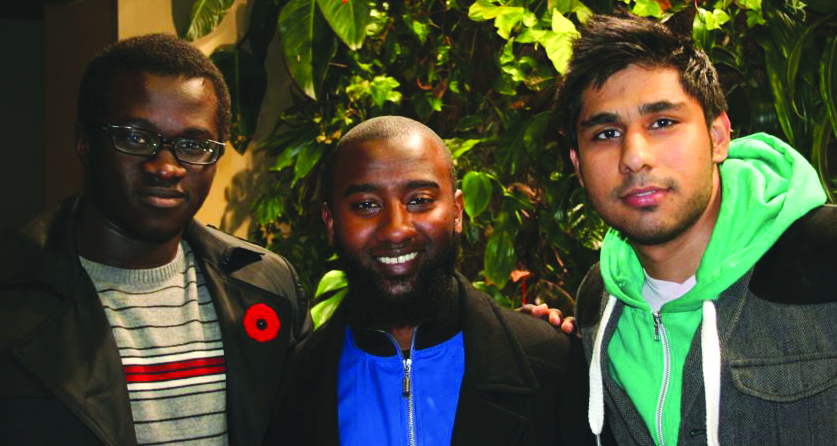 On Thursday, November 7, spoken word poet Boonaa Mohammed wrapped up Laurier Brantford’s Get R.E.A.L. week with performances of his work, along with discussions afterwards.

Mohammed opened up the presentation with a dramatic performance of his poem “Green Card,” which brings up the topic of his parents’ immigration and his personal experience growing up in Canada. After reciting his poem, he let the audience know that he had just arrived from being in an Islamic city, apologizing for his throat being so dry from the desert.

Mohammed has been dubbed “the voice of this generation,” but if you asked him he would reply, “I’m really a no-body, I won some competitions back home so because of that, I’ve got a platform.”

Of Ethiopian descent, Mohammed opened up about his personal life and how his background affected his life growing up in Toronto. He shared how Toronto was so diverse that at times it was confusing.

“I had Italian friends, [a] Portuguese nanny, and went to a Jewish school,” said Mohammed.

He then introduced the discussion asking the audience if they had a “hyphenated moment.” A hyphenated moment — as Mohammed explains — is when someone asks you where you are from, and when you respond you are Canadian, they reply, “But where are you actually from?”

In response to his question, an audience member that had immigrated to Canada around the age of ten shared her experience with her ethnicity.

“I consider myself one hundred per cent Canadian, since it says that legally, but I am constantly asked what I actually am, it’s not enough to just say Canadian,” she had said.

“I thought it was good but some things made me uncomfortable in his conversations because I am white and I’ve never had any of those life experiences immigrants have,” said attendee Adam Coulter when it came to discussion time.

The topic proved to be one of great importance, especially since Canada is known and prided in the fact that we are so multi-cultural and diverse. Even if you could not personally relate to the topic, such as Coulter, he was able to see how people who can relate to being a “hyphenated Canadian” felt alienated.

Mohammed performed four more of his pieces, which had a great response from the audience. One of the poems discussed the topic of how the public treats him being Muslim, especially after the 9/11 terrorist attacks in the U.S.

“I’m proud to be Muslim, we are supposed to be the best example of a person, that’s what our religion tells us,” said Mohammed; and his passion showed.

His last poem featured the topic of love, and wrote it based on his feelings for his wife of two years.

Just before the end of the presentation, Mohammed called upon the audience to come up to the stage and present their own work. Carla Egesi, MyRespect coordinator and student at Laurier Brantford volunteered.

“Although you can’t control what happens to you in life, you can control how you deal with it,” said Egesi of where her inspiration from her poems came from.

The night featured many passionate stories about race, immigration, love, and many other personal experiences from not only Mohammed himself, but also from the audience. Mohammed set a very open atmosphere where people could share their own experiences and opinions. Although it may not have been relatable to everyone, discussing the topics does not hinder anyone personally; it can only help prevent future ignorance from others.