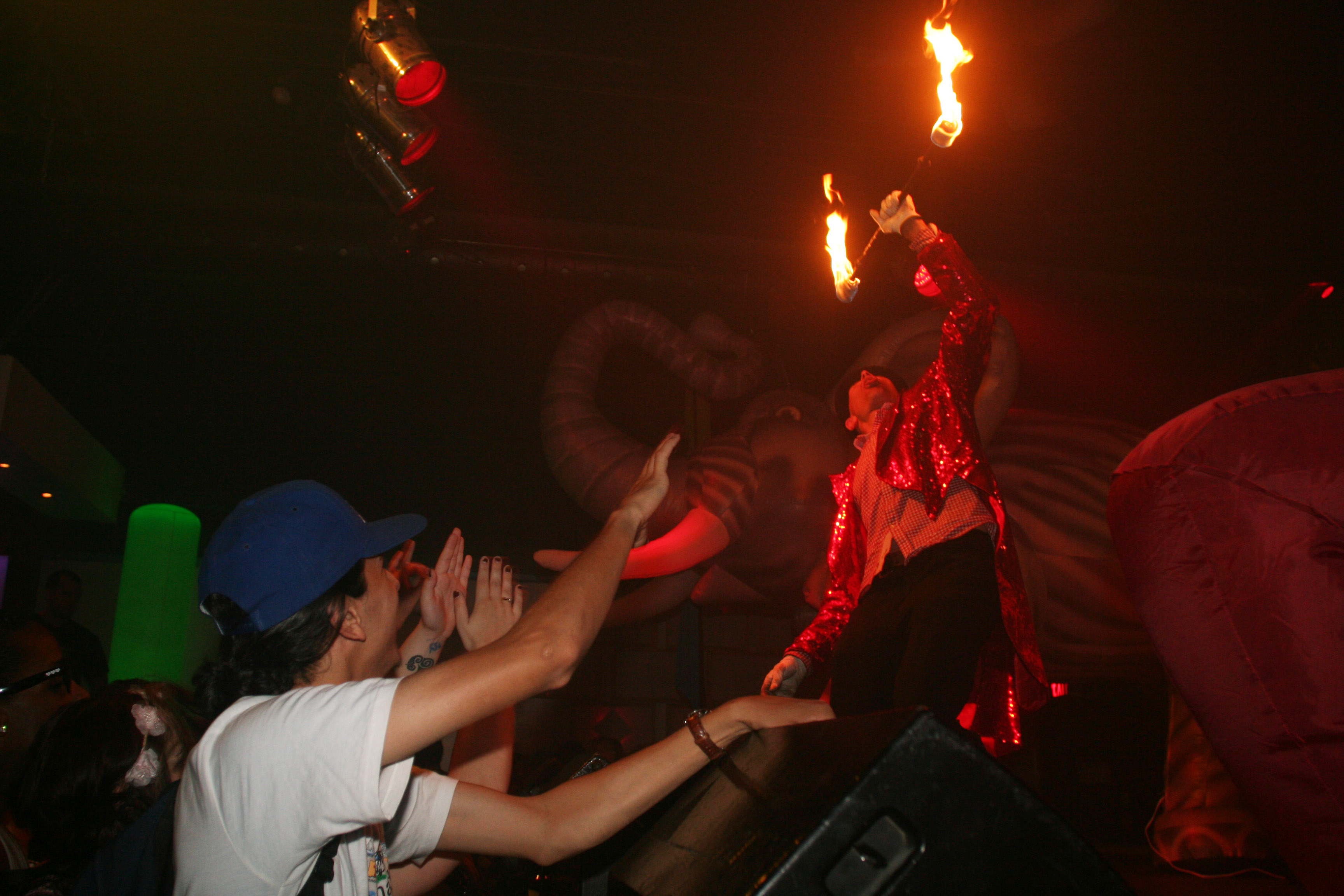 On Saturday night, students, locals, and even snakes, lined up to get inside Club NV for their opening event of the year – Frosh Circus. From sassy Fireguy eating and juggling fire, twirling LED lights and guests posing with about a 15-foot python around their necks; Club NV really upped its game this year.

“The circus theme was thought up by my boss. [He] thought it would have been really cool to bring a circus-y theme to a club and turn it into an event,” explained Mike Kim, the account manager for XL Lifestyle.

“[It’s] something no one has ever seen before, and everyone loves the circus, circus-y stuff, there’s only thing that would turn people away from the circus, and that would be clowns – which we don’t have.”

Kim further explained the different aspects of Circus, including fire breathers, jugglers, exotic animals (including pythons, tortoises and crocodiles) and international DJs including the appearance of Felix Cartal for the night, an electronic music producer and DJ from Vancouver.

“Everyone has fun. The most famous quote right now is ‘this is the best day of my life!’” Kim added in, referring to previous events.

Club NV is the prime spot almost all students in Brantford go to and owner Erin Provesan does her best to suit her largest clientele. “We try to be here for the students so they have things to do, we try to work with them as much as we can with events.” Holding the expectation of about 500 guests, the line slowly grew around 11 p.m., and with that, Fireguy started his act in front of the crowd outside. With over fifteen years of experience in fire play, the crowd loved his improv. Kicking the night off right, Fireguy stole the show.

Once inside, NV had vamped up their lighting and special effects system, but for Circus’s décor, there were only two giant blown-up animals on either side of the stage. Much like those one would see at a child’s bouncy castle backyard birthday party, there was a giant elephant and monkey with the DJs spinning their table centre stage. Fireguy was on and off the stage interacting with the crowd as music took over, with LED lite balls, batons and fire wand tricks. He took stage every now and then “when the time felt right” to perform with a fire-red, sparkly ringmaster’s blazer, and even lit his groin area on fire a few times.

The python came out for a very short time in the back corner next to the bar where club photos are usually taken. Due to vibrations sent by the sound system, only a few guests were able to snap pictures before the princess-like snake had to leave at midnight.

“We focus on the students,” mentioned Provesan, explaining different events on Saturday nights to try and do stuff orientated around students. Events are targeted towards the student-populated downtown core. Based on guest attendance and indoor venue, XL Lifestyles have done events different ways suited to the circumstances.

XL Lifestyles is an event management company specializing in event marketing and producing large-scale gatherings. Frosh Circus, is only one brand they work with alongside well-known The 12 BARZ of Christmas, The Bunny HOP, The Porch Crawler and much more. After three years of hosting successful events in Waterloo, management finally decided to branch out and hit around 14 cities across eastern Canada, with about 120 events carried out per year and about 40,000 tickets sold.

Although there were no extravagantly-dressed female acrobatic performers swinging from large rings, fire-breathing dancers adorning each side stage or more than one main performer mingled on the dance floor; with rhythmic lights and smoke, drinks provided at the bar and enough seating area for those with tired feet, everyone seemed to enjoy the night.

There will be more entertaining nightlife events held in the coming school year in Brantford. Provesan is excited for everything lined up this year and regarding newcomers, she said: “Welcome! We hope to see everyone soon… that is when they’re of age, of course!”