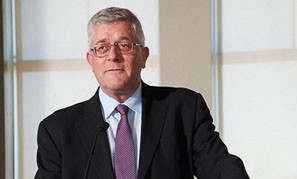 The fourth annual Leadership Summit took place on the Waterloo Campus at 10 a.m. on Saturday, January 10th, 2015, and was sponsored by Laurier Alumni. The theme for this year was to ‘inspire lives of leadership & purpose.’ One of the key highlights was to deal with and manage failure which was a common thread in all presentations and nearly every workshop.

Over 400 Laurier students represented various organizations including the Aboriginal Student Services, Athletics &Recreation, Residence Life, Diversity & Equity Office,Students’ Union, Student Leadership Centre, Student Alumni Association and many others. The students came together to participate in concurrent training regarding their roles as student leaders and what it could lead to in the future.

The day-long event included two keynote speakers, seven featured presenters, twelve Laurier Alumni guests and more than thirty concurrent workshops. The opening keynote speaker was Laurier President and Vice-Chancellor, Dr. Max Blouw. He presented a brief autobiography including what lead him to Wilfrid Laurier University. Blouwhad to make significant changes in his life, and mentioned that “leadership was a marathon and not a sprint,” during his speech. Blouw spoke about the idea of being humble in leadership, and said that “the best advice I can give to young leaders is to keep your feet on the floor; don’t get caught up in it.”

The day continued with a networking lunch where students had the chance to mingle with other Laurier Alumniand find out more about future careers. Along with their job titles, the Alumni had cards with icebreaking questions such as ‘ask me about dog sledding in Iqaluit’or ‘ask me how being a student at Laurier shaped my career,’ to help students feel more comfortable with sparking conversation. Workshops were then held on various topics such as reflective journaling, combatting gendered violence and balancing work with school and personal life.

The event concluded with the closing keynote, Wab Kinew, director of Indigenous Inclusion at the University of Winnipeg and named by PostMedia News as one of “nine Aboriginal movers and shakers you should know.” Kinew’s lecture began with a short autobiography about two modern men that he idolized; Nelson Mandela and Barack Obama. He then paid tribute to residential school survivors and Tecumseh, a chief who helped bring together various tribes in 1812.

Kinew mentioned his desires for the next generation of leaders, “Be courageous and have humility.”