Getting out of this world may help you see it better 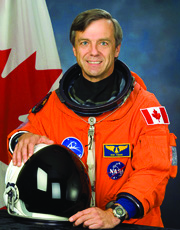 What has your job taught you? There are so many different careers out there in many diverse fields, each and every one teaching people new and important things about our world. Problems and solutions that affect everyone on Earth can be easily overseen without influences such as one’s job.  In Dr. Robert Thirsk’s case, it was actually leaving the planet that brought him closer to it.

The debate on whether Earth’s climate change (previously known as global warming) is a natural occurrence or man-made issue prevails. What we do know is that the drastic climate changes over the past 50 years are at a rate never recorded in history. This important issue worries not only scientists in that field, but many others as well, such as Thirsk, a retired astronaut for the Canadian Space Agency, and they all keep this issue close to their hearts.

Thirsk says, “Researchers seem to indicate that although there are global processes that contribute to [climate change], human activity plays a role as well.” Thirsk explains that his worries about climate change are not necessarily for his generation, or even the generation of his children. He worries for the generations of the future that will have to deal with our generation’s consequences.

Thirsk has taken part in two space missions, one being a short duration flight and one a long duration flight. His first mission in 1996 set a record at that time for being the longest short duration shuttle flight, at 17 days. He and his six crew mates devoted their studies to investigating life and material sciences under spaceflight conditions. He explains, “I think I’m more in tune with the planet than I had been prior to flight, and I think every human being on the planet would benefit from seeing that orbital perspective.”

In 2009, Thirsk was the first Canadian to set off on a long duration flight for the International Space Academy. Thirsk explains that during a long duration flight the work is not as fast-paced, and this gave him and his crew members the opportunity to look out the window at our little blue planet every chance they could get. He says that was one of his most memorable experiences in space, but admitted the disappointment he felt as he saw the oil spills and clear cut forestry from up above. “It gives you a sense that life on Earth is actually fragile, and that humans have a responsibility to maintain this planet so we can support life for many generations to come,” says Thirsk.

One of Thirsk’s main desires is to show that space technology can play an important role in supporting life here on Earth. He chuckles as he recalls the words of his Commander when he took orbit for the first time, “You’re a well-trained crew, we’ve got great support on the ground, and therefore if you find that during the next 17 days you’re not having fun, you’re doing something wrong.” Thirsk admits how much he loved his job as an astronaut, as he would take pictures and videos every chance he could get to show the people on Earth how his studies affected them as well.

Although Thirsk’s astronaut studies did not directly revolve around climate change, he had actively worked with an initiative called Space for Species that does. This initiative educates students on the dangers to the environment from manmade pollutions. Thirsk explains that astronauts would take part by using handheld photography of Earth while in space, along with satellite Earth observation to show to the students. This was in cooperation with wildlife research to also show the students the large amount of endangered species. With this data, awareness is promoted to students about the effects humans have on Earth and the animals that inhabit it.

Mary Webster, an activist for Space for Species is an absolute animal lover. “Everyday, the human population contributes more and more to man-made pollution and destroys the natural habitat of wildlife. This planet isn’t only ours. We share this earth with all other species living on it. It’s my goal to educate the public about the dangers our environment faces because of us,” she outlines on her Space for Species blog.

“I really wish that humans— civilization— could come up with a way to preserve the environment as it is, including the global temperatures, just so that we can preserve this very fragile environment,” Thirsk says. He is proud to say that he had one of the best jobs in the world. Although his job was literally out of this world, it had taught him more about our world than he had ever hoped for.