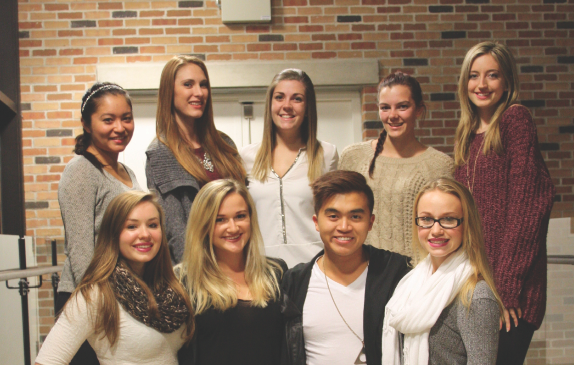 Fashion for Freedom is a club based on using the arts to raise money for cancer research.

The club, created by Dran Ngo, allows students to tap into their creativity and offers them a channel to openly express themselves. As the club website states, the club is looking to use students’ artistic abilities through fashion, dance and music to create a fashion show. The club will give students a chance to share common interests such as designing clothes and singing.

One hundred students are currently involved in the club. Ngo said there are about 18 executives because it is such a big project.

“We don’t have anything like that here, “said Ngo. “I love performing, and we don’t really get to see KAOS [dance team] perform, so here is a chance for KAOS to perform for our school, on campus.”

Ngo said he hopes it will be a new way to raise money for the Canadian Cancer Society.

Ngo began by sending out a mass email to everyone that there would be a meeting. At the meeting, 200 students showed up expressing an interest in the club. Adam Lawrence, the Dean of Students, assisted with funding.  Ngo said another donation of $500 was recently given.

Ngo has lost two uncles to cancer in the past year. Kim Squires, is one of the head model managers, said her aunt is currently in palliative care, in her fourth stage of cancer.

“We do a lot of cancer initiatives here, which is great, but this is a new and creative way to raise money.”

“Fashion for Freedom is different in the way that it is bringing the Arts into a fundraiser for a good cause,” said Karlee Cockburn, co-executive of retail and fashion.

On October 20, Ngo held a “Zumba-thon” to raise money for the event. However, he was disappointed with the number of participants. Fifteen students were able to attend the event, making $35 in the night. Ngo said the date and time was wrong but he still appreciated everyone’s participation.

Kim Squires is head model manager along with Shawni Hnatiuk. As head model manager, Squires organizes rehearsals and selects the models. On the day of the show, she is in charge of making sure the costumes look good, the pace is on time and that the models are in place. Squires sent out many applications for students who expressed interest in modeling.

Squires said they are looking for people who can be confident on stage and be committed to the event. Squires said all body types are welcome, however, they will be sizing to what they are given by the participating stores.

“We’re looking for someone to help represent every group on campus,” Said Squires.

Cockburn is the co-executive of retail and fashion, as well as a dancer and choreographer. She is in charge of contacting clothing retailers and private designers, ensuring that clothing stays in perfect condition while in use and when it is returned. Partnerships have been made with three stores.

Clothing will be kept to the theme of “Red Carpet,” Cockburn said it has been challenging due to the change in fashion seasons.

The club has on-campus partnerships with the Students’ Union and Wilkes House Gym, including other clubs such as the Women’s Basketball club and the extramural men’s hockey team is assisting with the event.

The name Fashion for Freedom is a play off of Waterloo campus’ club called Fashion for Change. Ngo explains that his interpretation of freedom is freeing someone from disease. The intent for the event is to run annually with a focus on a different charity each year.

The Fashion for Freedom fashion and dance show will be held on January 15, 2016 at the Civic Centre. Tickets will be available near the end of November.