Consent is golden and mandatory 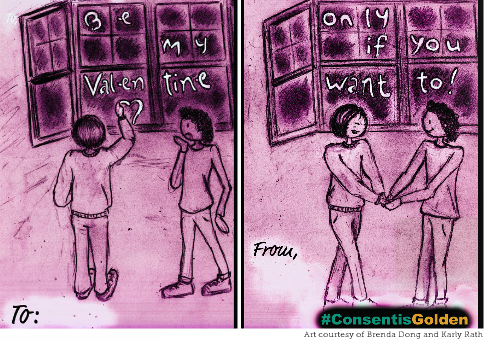 Laurier’s Advocates for Student Culture of Consent (ASCC) hosted the first panel discussing the “Blurred Lines of Consent” on  Jan. 26 in Waterloo.

The event was streamed from the Paul Martin Centre in Waterloo to the Brantford Students’ Union boardroom. There were 40 attendees in Waterloo and seven in Brantford.

ASCC was created by Laurier students and alumni who have experienced sexual violence. They are currently in the process of having a sexual assault policy approved, and are now creating a protocol for the policy.

Topics ranged from how to set boundaries in a relationship, the harm in sex representations in media, to being sent pictures or sending pictures. ASCC addressed the confusion around consent, especially under the influence of alcohol and drugs.

A central theme was to address consent not only in the bedroom, but also in everyday interactions. Instead of saying, let’s go to the movies, try asking, “would you like to go to the movies?” This provides a space for choice rather than forcing someone into a situation.

Soucie said, “Consent is a skill. If we only ever practice consent in the bedroom, we’re setting ourselves up for failure.”

Jacobs talked about normalizing consent at a young age. “[With children] ask permission before hugging or kissing, don’t force them to hug someone they don’t want to, teach them how to read body language and teach them the correct body part names”, she said.

ASCC used the event to launch their website, and social media campaigns through the hashtag #ConsentIsGolden. The website was launched the same day as the panel. It has a section about how to handle disclosures, what to say, what not to say. It also includes resources for the Brantford and Waterloo-Kitchener area, both on and off campus.

Natalie Anderson, attendee of the streaming and Healthy Lifestyles coordinator, said, “I was mostly wondering about the line between alcohol and consent, but the panel made me aware of other blurred lines of consent.”

Godderis emphasized that consent is complex and an ongoing conversation. Anderson said, “I learned how to have the conversation about consent in a long term relationship and not make it awkward.”

In honour of Valentine’s Day, the ASCC, the Gendered Violence Task Force, and the Laurier Students’ Public Interest Research Group (LSPIRG) have created ‘consensual valentines’ and will be handing them out on both campuses for free.