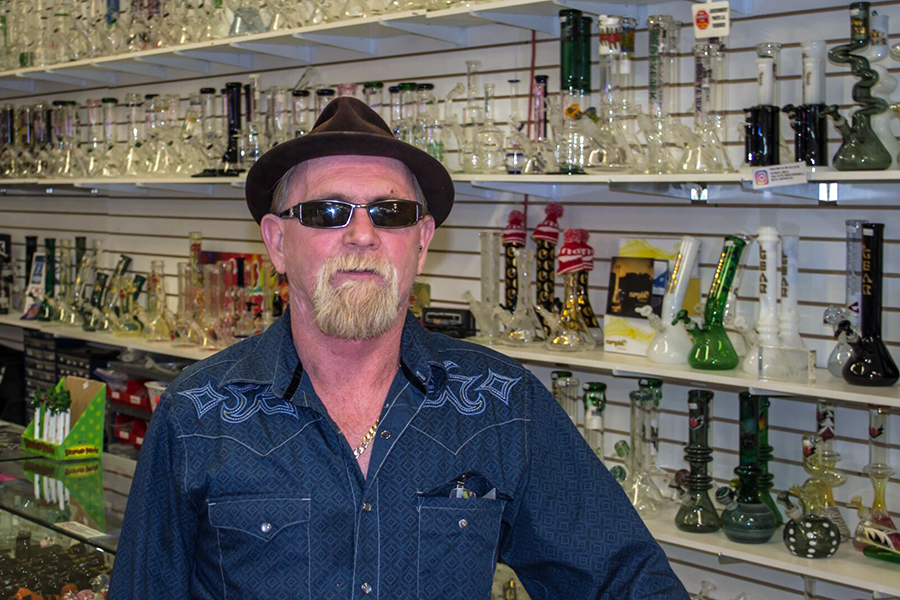 Brantford’s downtown is home to a wide variety of shops and small businesses. These businesses define Brantford, but what defines the businesses? This is the inspiration behind “Clerks”; getting to know those who know us so well. From our shoe size to our favourite item on the menu, these business owners make us feel more like family than customers. With that being said, let us shine the spotlight on “Crazy” Bill, founder of Crazy Bill’s Cannabis Culture.

For those who don’t know, what is Crazy Bill’s and what’s it all about?

Well, we started out as a variety store, and my son is a glassblower so he got us to start selling pipes for him, and now we’re one of the major head shops in this area. We have a couple shops in Hamilton, one here in Brantford, and we’ve got a website that’s doing quite well. We’ve got sales from all over the place. The name wasn’t even meant for a head shop, but now it’s our main business. The Hamilton stores are strictly head shops, but out here it’s like everything, because we started with everything. We’re still feeding that need of a variety store in downtown Brantford, but we’re way past being a variety store. We try to have everything to do with marijuana; we don’t touch anything that has to do with the hard stuff because we don’t want anything to do with it. That’s basically who we are.

Yes, we opened 16 years ago. Back when we started, it wasn’t illegal to sell paraphernalia, but it was against the law to talk about how, “it was good for weed”. You could sell a pipe to someone and they could use it for whatever they wanted, so there was a bit of a gray area. People would come in and say, “I want a really nice weed pipe,” and I’d have to say, “I have a really nice tobacco pipe,” or “I could show you this really nice pipe,” but now it’s totally open; I wouldn’t care if there was a cop standing right there, I’d say, “This is the best weed pipe in town,” and they wouldn’t care. It’s totally changed, [the police] have come to know us, because we don’t sell to minors and have a very strict code that way. When we first started selling, the police would check kids and ask, “Did they sell you a pipe?” and the kids would say, “No, they won’t sell us anything.” After they did that a few times, they left us alone. We’ve had no problems with the police in 16 years, same as in Hamilton. We like to think we’re running a “classy joint”, you know what I mean? We’re not just serving recreational marijuana to people who just smoke to get high. There are people who want it for medical purposes; elderly people, doctors, lawyers, all kinds of people. They want to come into a professional establishment and not feel like there’s a bunch of punks hanging around. Not that I’m against younger people, but if you had a shadier store, a lawyer might feel out of place. But coming into our store, they feel comfortable and we’re professional with them.

Where did you get the name “Crazy Bill”?

That’s funny because downtown Brantford 16 years ago was all boarded up. All the buildings are gone now where they are building the YMCA, but before they tore them down they were all boarded up. It was bad, people lived in the apartments upstairs but there were no stores. So I’d be telling my friends that I was opening a store and they’d ask me, “Are you crazy Bill?” We got that response so many times that my wife said, “That’s what I’m calling the store.” I still hadn’t decided on a name, but because everyone kept saying, “Are you crazy Bill?” she decided that was going to be the name for it. I said, “But it’s for you,” and she said, “I don’t care, we’re calling it Crazy Bill’s because everyone thinks you’re crazy.”

Vice recently did a piece about “smokeable art”. I noticed that you carry a lot of pieces similar to what is shown in the video. Where do you stand on the debate between, “functional art” and “art with a function”?

In our Hamilton store, we have a lot of expensive glass; some are $5,000 to $10,000. So it’s up to the individual. I think it’s art, because my son is a glassblower, and I see how hard it is to make glass art. It’s not just like moulding something with plasticine, it’s like 18,000 degrees, and you have to keep it that heat and work with it. So it’s a serious art, you only have one shot at making a design. And if you are adding something to it, if those two pieces aren’t the same temperature, one cools faster than the other and it just smashes. It’s a serious art, just like any other art form, so I can really appreciate the art for what it is. It’s up to the individual whether they want to use it or not use it. Some people buy these and put it on the shelf and say, “You’re not touching my pipe, isn’t it beautiful?” and other people who have money to burn are like, “Hey, want to take a hit out of my $5,000 bong?” Art is art; you do what you want to do with it.

How do you feel about enabling individuals to pursue their vices?

Well, I smoked for a long time, cigarettes and marijuana. I’m a businessman, so I always had in the back of my head, “they’re going to get it anyway, might as well get in on it.” It’s a sort of a moral decision that I made, I don’t feel like I’m enabling people with smoking, because I’m against kids having it, it’s only consenting adults. As a society, we’re fine with people going to the liquor store and buying wine and we’re fine with people over eating, we even cater to them. We’re fine with all kinds of things, like sugar. We’re fine with companies to just pour the sugar into things, and we know it’s deadly. But all of a sudden, you sell bongs and you’re a dirty, druggy guy. That’s all changing now. With medical marijuana it’s all changing. Like it’s helping little kids with epilepsy, it’s amazing. There’s a strain called Charlotte’s Web, it’s very low-key but they were selling it to these parents whose kids suffer from seizures. They went from having (multiple) seizures a day down to just one. It doesn’t have THC in it, it has CBD’s which is the actual pain killer in marijuana. They bred out the THC, the part that gets you high, and kept the part that relieves pain. So with the medical end of it, it’s becoming more acceptable and not being seen as a dirty thing anymore. So how can you be enabling people when you’re actually helping them?

I read online that Crazy Bill’s advocates for marijuana. How do you do this?

We sell paraphernalia to use, that’s part of our advocating. We are providing you with the products you need to help you to smoke recreationally or medically. We also donate to different clubs for the 420 rallies but we’re not really into the whole revolution. We’re a business, so there’s a fine line. Yes, we want it legalized and we advocate that, but we’re not really out there fighting the good fight. We do donate to the Brantford Cannabis Club, so we help out when we can, but we’re not freedom fighters or anything like that. There’s different ways to do your part.