15 and Fairness puts the writing on the wall 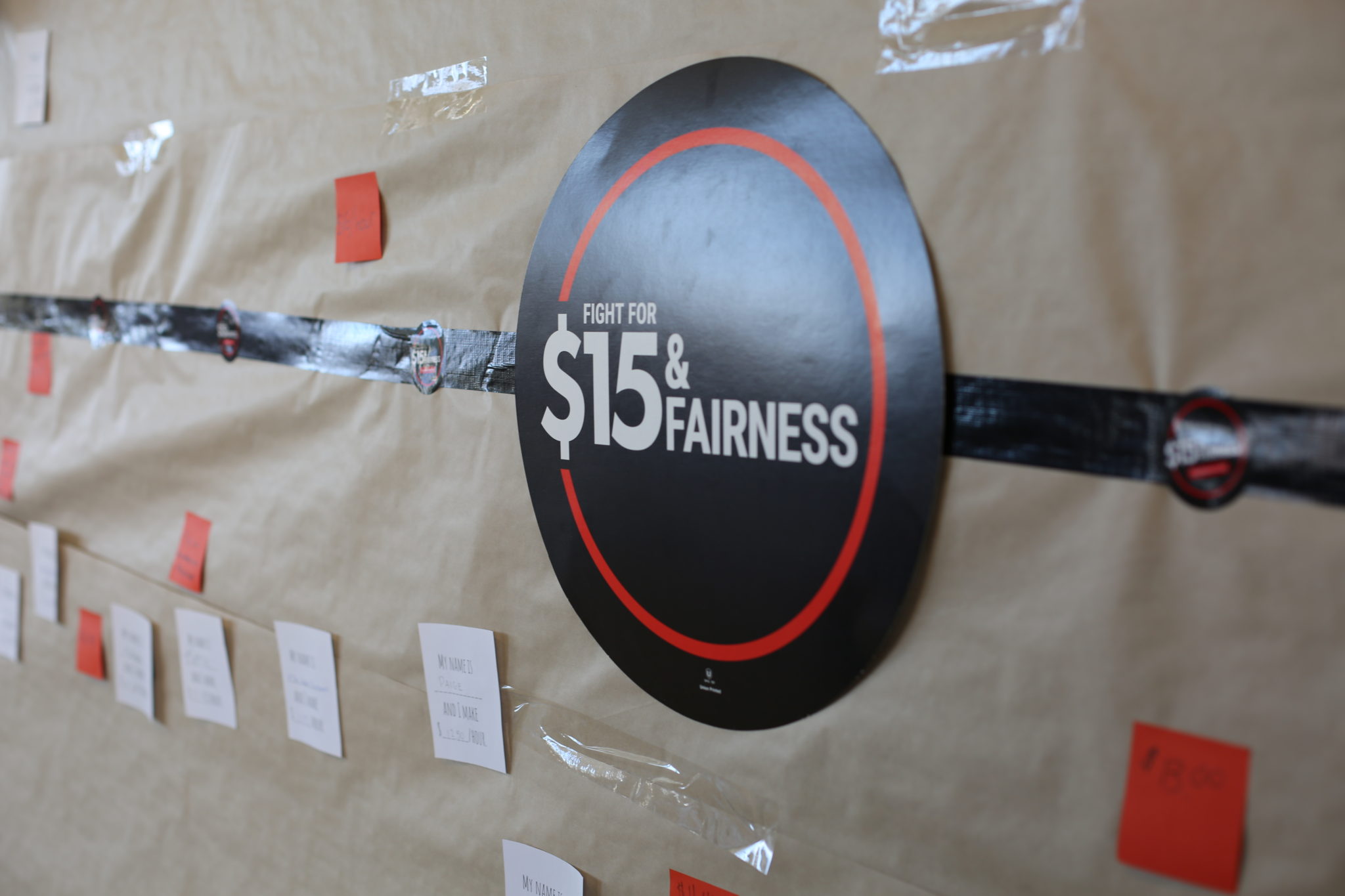 Fight for 15 and Fairness at Laurier Brantford are advocating for a raise in minimum wage. The wall of wages event took place on March 22. Students posted their hourly wages on the wall in RCW for comparison and could sign a petition for fair wages.

Fight for 15 and Fairness is an Ontario-wide campaign which is fighting for a $15 minimum wage. The event was introduced to Laurier Brantford by a student, Eddie Sauve. The wall of wages event was coordinated by volunteers Victoria Macedo and Brett Cox.

“It’s under the group, Fight for 15 and Fairness, it’s an Ontario-wide group to bring awareness to job security, precarious work, minimum wage, sick days and hourly kind of wages,” said Macedo. “This event, in particular, the 15 and Fairness group, to just bring more awareness to the types of jobs people are working in and what this precarious work looks like compared to the wages.”

The wall featured some of the top earners at Laurier and across the country.

“The wall of wages is an event that was inspired by York [University]’s 15 and Fairness campaign … we turn [the wall] into a life-size image of the huge disparities that we see in society,” said Cox.

“We’ve taken some of the high administrative people from Laurier and what their wages are, as well as Justin Trudeau’s wages, as well as the wages of the CEO of Tim Hortons and McDonald’s and figured that out to an hourly wage over the year, put them at the top … throughout the day people come up and wrote their wage on a sticky note and of course, the majority is going to be underneath the 15 wage and even 15 minimum dollar wage,” said Cox.

The petitions and support from Laurier all will be going to a higher authority in hopes of a positive change for Ontario.

“We haven’t figured out exactly how we are going to present to one of the MPP’s or MP or who exactly we are going to give it to, but someone with legislative power or voice. We’re trying to give it to them and I know that [Eddie] was also fighting for a $15 minimum wage on the [Brantford] campus itself as a starting point. York University just won $15 minimum wage on their campus not long ago so that’s the base goal, the first step to get the ball rolling and eventually, hopefully, province-wide,” said Cox.

As this is the first year of Fight for 15 and Fairness, Sauve and his volunteers plan to grow into the next year and try to meet their goals.

“We are hoping that it will cross over into next year and will have groups starting in September, which will get more people involved with Fight for 15 and Fairness throughout the year,” said Macedo.

As society progresses, the group believes that the fight is very much necessary today to help people understand the seriousness of the wage gap.

“As we’ve seen with the rise of neoliberal policies, the rise of [temporary work], the rise of contract work, [and] foreign labour … they need to pay them decent wages. There’s been an increasing amount of precarity in our work, and all in the name of profit … CEOs make a ridiculous amount of money, [and] this is accelerating fairly quickly where the richest corporations now have, I think literally half of the wealth in the entire world,” said Cox.

Cox also explained that research has shown that minimum wage will not raise the cost of living.

“We have pamphlets with information, we have a package of information that has [been] debunking myths,” said Cox.

With a strong stance on raising the minimum wage, the group does get a good amount of backlash from the public who have different views and how they combat the disagreement.