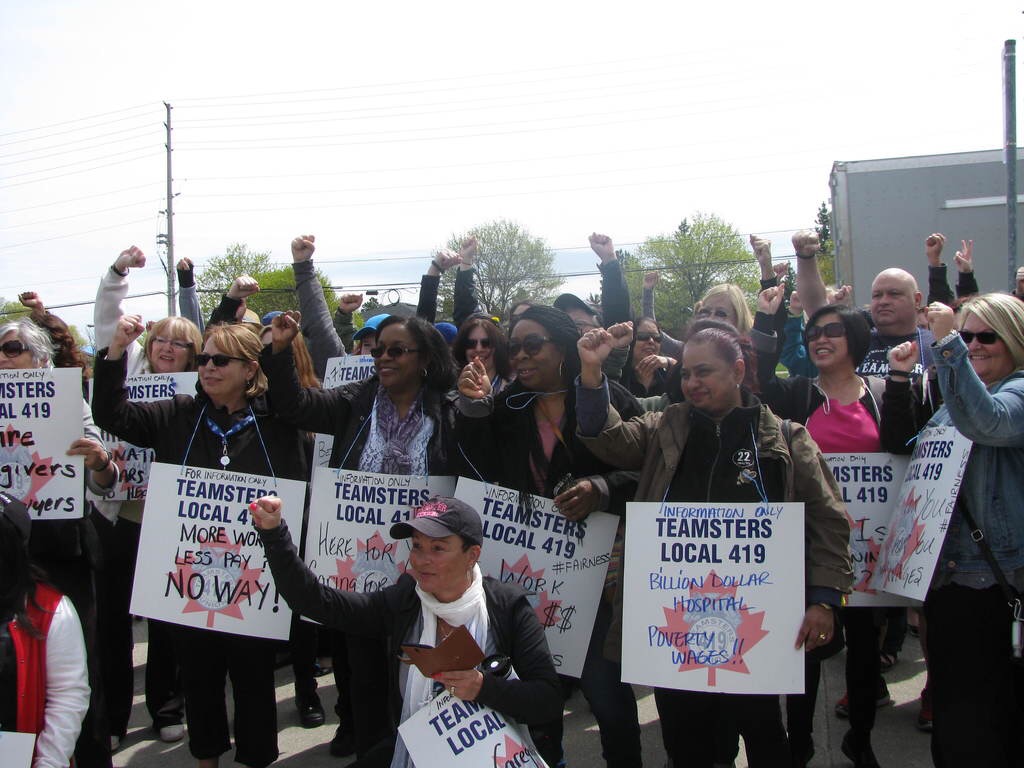 Brampton – William Osler clerical staff rallied together along with members of Teamsters union outside Brampton Civic Hospital to fight for equal wages.

Vehicles drove by from 10:30 a.m. to 1 p.m. honking their horns to support the staff walking along Bovaird Drive East with signs asking for fair pay in the world of clerical work.

Clerical staff at Brampton Civic, Etobicoke General and Peel Memorial have been without a contract for approximately two years and have asked for a two per cent raise. They received a letter near the beginning of April offering them a 0.7 per cent raise.

Wednesday was Administrative Professionals Day, though many administrative professionals at William Osler feel unappreciated. Joanne Flewwelling, the Interim President and CEO of William Osler Health System, sent out an email Wednesday stating, “We celebrate the many men and women across Osler who often work quietly behind the scenes to help keep everything we do at Osler on track. … Thanks to them, many of us are able to focus on doing what we do best because they take care of the rest.”

Many individuals felt that if they were essential and as important to the organization as they say, they should be paid as such.

“Under the Ontario legislation hospital workers are known to be essential workers, so they don’t have the right to strike. We are under HLDAA (Hospital Labour Disputes Arbitration Act), which is our arbitration. So, if talks break down into negotiations, because you’re not allowed to strike, you need to put your grievances in front of the arbitrary. And so, what we did, this hospital, this clerical staff, their wages amongst the other hospitals in this area, meaning headwaters, Georgetown, Trillium, Credit Valley, is the lowest,” said Michael Downes, a Business Agent of the Health Care Division of Teamsters.

“They could care less about us marching up and down the side walk. What they care about is the message getting out about how they are spending the funds and how they are treating their workers. This is phase one. We have to go to the MPs, we have to get public awareness. And the next thing we’ll be asking is ‘Do you know where your donation dollars are going at William Osler?’” said Tim Oribine, a Business Agent of the Health Care Division of Teamsters. “They need to be publicly scrutinized.”

“At the negotiation table, they tell us there is zero and then the sun comes up and some of them are getting five per cent increases at six figures, 47 per cent increases [for others],” said Downes. “So, the disrespect, which many feel, has been going on for far too long.”

“16 cents doesn’t even buy you a Timbit,” said a William Osler employee, who wanted to remain anonymous.

“Are we living in our own class? The poverty class?” said another anonymous source. “Where is the money going? Who is accountable for the money?”

The President of Teamsters Local 419, Brian Lawrence, made an appearance at the rally to show his support and gave a short speech about proving how much the workers mean to them.

“0.7 per cent is a real tragedy,” said Lawrence. “We are going to make this hospital understand that you are worth more.”

A lot of the individuals that stood up today explained that they were single parents or the sole income for their household, many also having children.

“It’s recognized as being the [fastest] growing hospital in Canada, and the wages are stagnant,” said Downes. “The clerical staff are the front-line workers and [William] Osler deems itself a health system and the clerical workers are an integral part of the health system and this is all about getting the employers to recognize that many of these ladies and men are single parents and trying to make ends meet. They should respect the fact that there is a cost of living allowance that people should be getting, and the cost of living in Brampton has gone up significantly. It’s gone up significantly and many of these employees are falling behind.”

Other hospitals, most non-unionized, are getting a higher wage for the same job.

“Over [at Credit Valley] it’s non-union. Basically, here I’m getting $21.00 and over there I’m getting $25.50. We just got a raise. Every year we get a raise,” said Maria, an employee at both Etobicoke General and Credit Valley Hospital. She also didn’t want to release her last name. “I needed the extra money and I have three kids. $21.00 and point seven per cent is a joke.”

Many employees stated that they have thought about leaving William Osler altogether because of the wage gap.

“I thought about it when SEIU (Service Employees International Union) was here because they weren’t doing anything at all for us. But then when Teamsters came in I noticed there was a difference so I decided I was going to stay. I have been 10 years so I’m safer here especially now with this new union. The only bad thing about Credit Valley, is that it’s non-union so basically seniority and stuff doesn’t count. But we are still talking about $4.00 difference,” said Maria.

All employees that spoke up about how they are treated by William Osler refused to give their names, as they were afraid they would be reprimanded come Monday morning.

An individual, known by their alias, Alex, spoke about a few unfair situations within the Osler organization.

“I’m the Chief Steward, I brought the Union in. They (William Osler) hate my guts,” said Alex. “People who haven’t even met me say ‘Let’s get rid of this bit this b—-.’ It’s very, very sad because I am for the people and I am for the rights.”

Alex explained a situation in which they were fired because they called the union due to unfair working conditions in which a female co-worker took a five-year leave of absence and was welcomed back into the workplace with the same seniority and pay. Alex has been fired three different times due to union work, Alex states.

“They keep those people [the people who do what they are told], they want those people because those people are afraid of them, ‘Yes Ma’am, no ma’am, how high do you want me to jump?’ But as soon as you say, ‘Sorry, that’s not in my job description,’ then we are the bad people,” said Alex. “This organization is the worst organization to work for because of the way they treat their staff.”

There is nothing in sight of a negotiation, but Teamsters as well as the clerical staff hope to continue the fight for fair pay.

Though the clerical staff are fighting for their wages, they also are concerned that they are not being provided with the proper compensation for what they do, over and above for the patients.

“So, when you have nobody doing the job, it boils down to patient care. When it comes to housekeeping, when it comes to kitchen, everything. They don’t get that, they don’t see the big picture,” said Alex. “The bottom line is the only ones who suffer are the patients.”