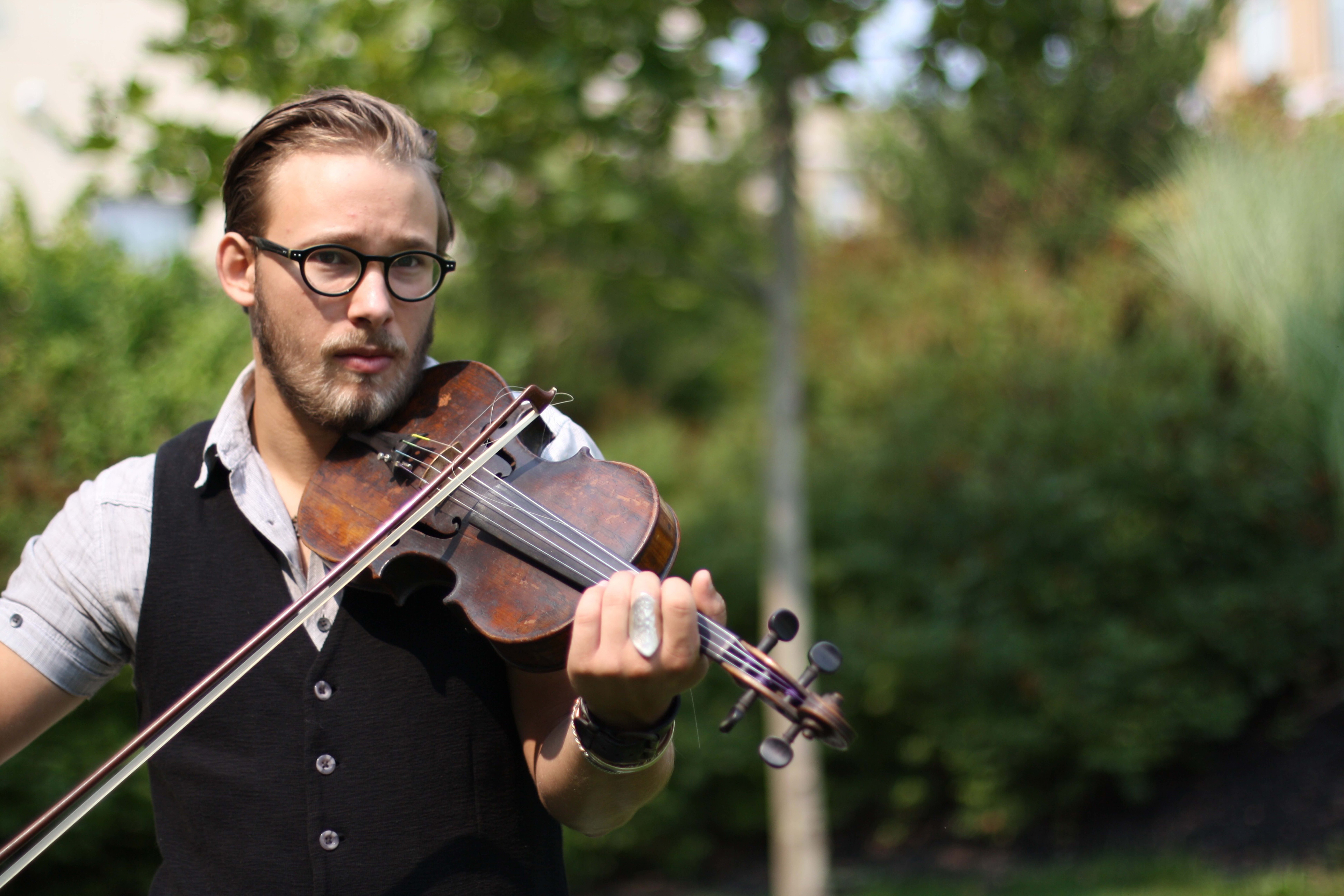 Benjamin had a guitar in his hands by the time he was one year old, which was actually photographed on the front page of the Brantford Expositor way-back-when. Today, Benjamin is 19 and music is his life.

Benjamin’s great-grandfather was a fiddle player, who passed down his violin to Benjamin when he was seven. That was when the lessons began. He started with classical, and soon fell head-over-heels for fiddling.

Eleven-year-old Benjamin found himself busking with his fiddle in Lunenburg, Nova Scotia. That quickly led him to busking in Halifax, Ottawa and Toronto.

There was never a doubt in Benjamin’s or his parent’s mind that, since Benjamin chose this journey, he would do anything else but this.

“People have said ‘oh I don’t know, maybe it should just be just a hobby, or he should have a back-up plan.’ And I said, ‘why? When he loves what he’s doing.’ I can’t ask for anything more than for him to love what he’s doing. Right?” says Tracy Rogers, Benjamin’s mother. Tracy has taken on the management role of submitting his work for festivals and competitions, as well as marketing Benjamin’s musical career.

Paul Rogers, Benjamin’s father, is also a large part of the team, helping out with things such as sound, setup and musical critique. Team is a key word here. Although Paul and Tracy run their own company, they continue their full-time job as Benjamin’s agents, and they absolutely love it.

One moment that has always stayed with Benjamin’s parents was when a man from Sarnia came to their home to buy an electric violin Benjamin had up for sale. The man told Paul about his experience in the music field, and Paul thought he had quite the valid input since he mentioned he had put out two CDs. The man explained that he went into plumbing as a back-up plan recommended by his parents, and told Paul it was the worst decision he ever made.

“It was just kind of affirming, you know, it is okay that we’re supporting him and, let’s do this!” said Tracy.

“Why hold back?” Tracy smiled.

Within weeks they had Benjamin in the studio for the first time, and they are so glad they did. Two CDs later, Benjamin is playing 2-3 gigs a week, and also teaching instruments such as the violin, mandolin, tenor banjo, and guitar from a studio at home. Benjamin can even be found doing repair work on old guitars in a music store in Waterford when he finds the time.

Benjamin’s heart is in folk music, but he also finds himself toying with classical, jazz and blues throughout his two albums. His performances feature all original songs from his 2014 album “Wayfarer”, and his most recent album “Strong Mans Address to the Circus Crowd”, released this past June.

“You just get a huge high off of it really, being up there. It’s adrenaline but it’s also kind of like,” Benjamin pauses as he searches for the words. “When you’re up there it’s kind of calming, but you also have like a big rush. I don’t know how to explain it.”

Whatever it is, it has Benjamin wanting more. He hopes to play for bigger crowds more often, focussing in on festivals, folk clubs, and house concerts. But folk festivals are most certainly Benjamin’s favourite. They feel like a family atmosphere to him, even though technically all the musicians are in competition with each other, but you would never know. Everyone is so supportive of one another, very friendly, hanging out and jamming together all night.

“It’s a tough business, there’s no doubt about it,” Paul admits. “But you know, if you’re driven and it comes down to songwriting, if you’re a good songwriter … To me it’s like, where do you stop? You can’t stop now.