Raising the Bar: A literary bar hop through downtown Brantford 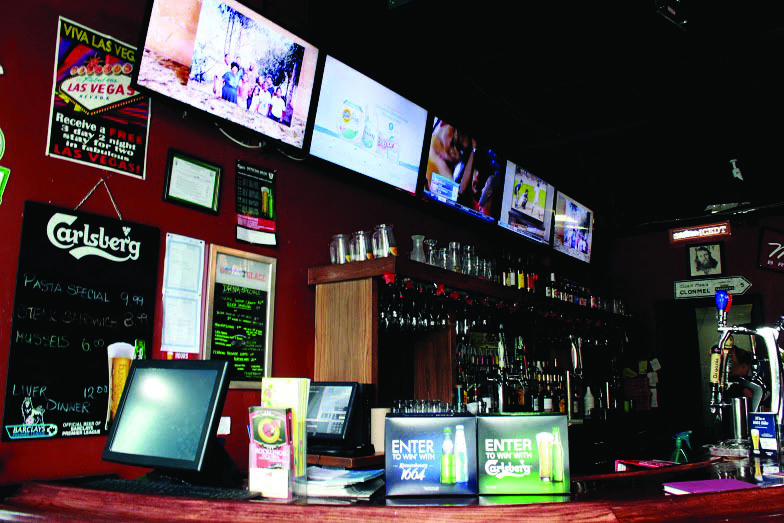 Brantford’s downtown is filled with a colourful collection of bars and pubs for Laurier students to try. Each of them has something different to offer; some have a warm atmosphere, while others offer drinks at a great price and host regular events. Regardless of what you are looking for, you’ll be able to find it in Brantford’s bar scene. The bars in this article are just a handful of what Brantford has to offer, so explore the rest of the city and you could find a diamond in the rough.

Let’s start with the bars in Harmony Square: Rocklings Tap and Grill and The Piston Broke (cough Grand River Hall and Rizzo cough).

Having just celebrated their second anniversary on August 23rd, Rocklings is still a new establishment that has rooted itself firmly into Laurier drinking culture. The bar is open seven days a week until 2 a.m., which can be a make or break factor after a late night study session on a thirsty Thursday. Rocklings offers a variety of specials, including a 10 per cent discount on food with a valid student card. In the past, Laurier groups and clubs have hosted events at Rocklings, including the Athletic Union, Blueprint magazine and the residence dons. They have a diverse menu, plus a solid pool table worth pulling the cues out for.

The Piston Broke has become a seasoned bar after being a hot spot for students and families for the last seven years. Due to it being a gastro pub, it focuses on food and offers an extensive menu. Don’t let this lead you to believe you can’t grab a drink there. They offer 13 different beers on tap and have just introduced a new rotating tap to keep things fresh for the beer enthusiasts. The Piston Broke holds many events that students are welcome to attend; they recently had an “East Coast Night” and are hosting Oktoberfest and Laurier Homecoming events. They also have a St. Patrick’s Day event, but get there early because, “by five o’clock you can’t get in anymore,” reminisced owner Eloise Huczczo. The Piston Broke also joins in on events in the Square when it can and holds live entertainment on Fridays and Saturdays.

Now that you’re warmed up, let’s take a quick trip down Dalhousie Street to The Rose and Thistle (cough Expositor and Lucy Marco Place cough).

A freshman in the Brantford bar scene, The Rose and Thistle makes up for its lack of longevity with cold drinks and huge portions. In the six months that The Rose and Thistle has been around, it has made a name for itself as a popular pre-drink spot for Club NV. The bar has a nostalgic, homey, feel. This doesn’t come to a surprise to the staff who see each other as family. Even though it serves a wide variety of customers, owner Audrey Pitcher is excited for the students return, “we’re looking forward to the students being back.” The Rose and Thistle offers many promotions Monday through Thursday, including deals on burgers and fries, domestic beer and other alcoholic beverages. They also host trivia events on Mondays and karaoke nights Wednesdays and Saturdays.

Now that we’ve got a buzz on, let’s finish up our literary bar hop on Market Street with Two Doors Down, Brando’s Beach House and Boston Pizza.

If you’ve ever walked down Market Street past 9 p.m., there’s a solid chance you’ve heard the echoes from Two Doors Down. The bar offers live entertainment seven nights a week with a variety of genres. This is due to the fact that owner, Dana Johnson, feels it brings in good crowds. Johnson must be on to something, because Two Doors Down just entered into its 12th year of business. The bar also offers nightly specials, however nothing specifically for Laurier students. Check out the mural on the side of the building to see some unique art and graffiti.

Two doors down from Two Doors Down is the always tropical Brando’s Beach House, which has been a part of the Brantford drinking culture for the last 13 years. Despite popular belief, the bar was named after the original owner of the bar and not the famous actor Marlon Brando (this has been perplexing students for over a decade). Brando’s is currently revamping its menu, but it still offers its oversized deli sandwiches and fresh burgers, which it’s locally renowned for. Brando’s serves a fairly diverse crowd, ranging from 19-year-old students to regulars in their 40’s and 50’s.  Despite this, Brando’s doesn’t offer anything specifically geared towards Laurier students.

Being the only franchise bar in the downtown area has paid off for Boston Pizza on Market Street South. For the past six years, students and families alike have been going to Boston Pizza to grab drinks, meet up with friends and catch the occasional Stanley Cup Playoffs game seven. The atmosphere is warm and friendly, and there are always deals going on. Their menu is filled with a variety of Italian and American cuisine. Laurier students can use their One Cards to pay for their meal, which can come in handy when short on cash.