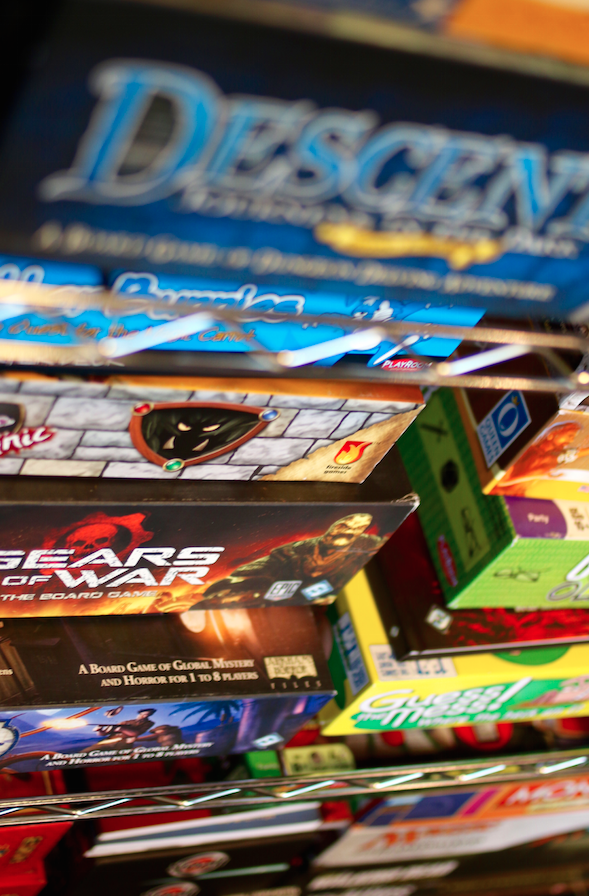 Kirley’s fascination in board games and other tabletop games came from an old tradition of a “Friday game night” in Kirley’s family. His parents made sure the television went off every Friday, and they would play board games for a sense of human interactivity in gaming. Kirley explained that people “just don’t do that anymore,” that people are losing their ability to hold a conversation which is, as Kirley put it, “a really scary thought.” Kirley believes tabletop gaming offers a unique sense of human interaction that reignites that ability to communicate, bringing people closer together than through the more common form of digital gaming.

Kirley is one of three owners orchestrating a project that works to bring the tabletop gaming community back to Brantford. Alongside his two good friends Bill Roloson and Geoff Dungey, Kirley has used his love for board games to help create a place called the Devil’s Bench Café. Experienced hobbyists and those wanting to explore this world alike can come together, enjoy a coffee, play games in the classic face-to-face environment and build memories as a community.

“Bill and I were bike enthusiasts, and while Geoff was away we decided we wanted to do something, to claim something as our own,” and so they played with the idea of opening a board game café together. “This was something we wanted to discuss in person with Geoff, so Bill and I biked down to Ottawa, in a small hurricane no less,” to propose this idea.

The name “Devil’s Bench” originated as the name of a gamer clan between the three owners, coming from Roloson’s dog. “Really sweet dog, but a devil dog,” Kirley explained. “Always slept under the workbench though, so we got the name from that. It just rolls off the tongue nicely. It’s really cool to me, how our gamer clan name is something that people wear now on our hats, shirts and sweaters.”

The Devil’s Bench is a café not only dedicated to the vast and wondrous world of tabletop gaming, but also to give people in the many communities branching out of Brantford a place to just “chill out” in an open community of warmth where anyone can come in and feel at home.

“To me, if I’m being selfish, the Bench is a place of freedom,” Kirley said. He explained that the Bench is a symbol of chasing a dream, exploring a project and the idea of “being in charge of my own paycheck,” an endeavor becoming more and more challenging in our society.

Kirley has made sure the café is a place where no matter what one’s gaming interests are, they can always be themselves, and feel completely comfortable doing so. “People can come in here, talk about Warhammer, talk about Magic or Dungeons and Dragons, and that’s awesome,” Kirley said. The bench is a symbol of that sense of community and gathering, an idea that otherwise “just isn’t in Brantford,” as Kirley explained it.

According to Kirley, the Devil’s Bench as a project could have gone either way, for the better or for the worse. “I’m very happy with how the community has received it,” he said.

“Why not try?” Kirley said. “I figure, if you try, and even if you fail, you’re not really failing because you actively pursued your hopes and dreams. You only fail if you don’t try. Humans don’t live long, if you have a dream, you might as well try and achieve it to get the most out of that life.” Kirley’s dream escalated into a successful place of community shared by others with similar interests.