Making the cut with Scumbags & Cavaliers 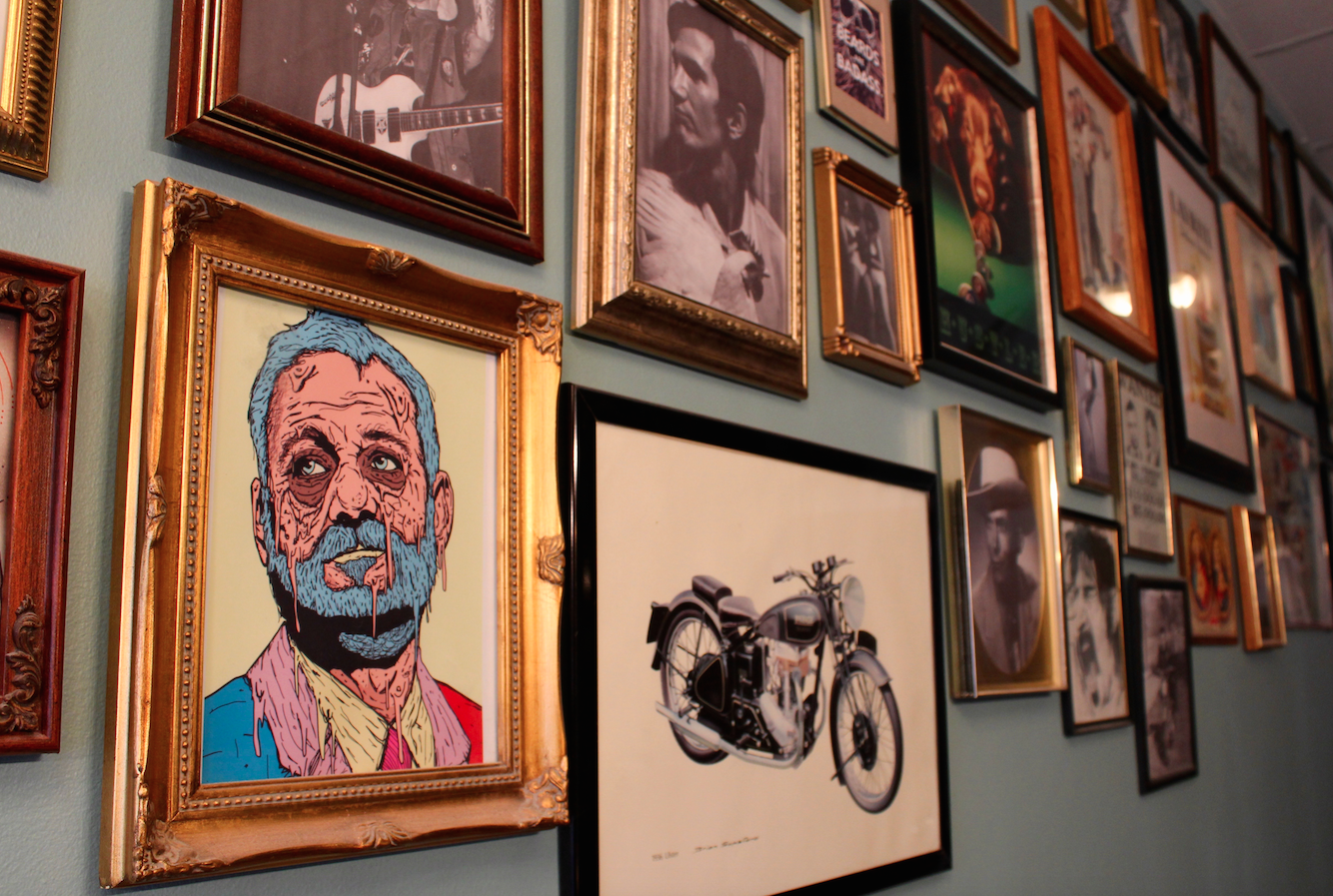 As the door opens, the soft vibrations of a hair trimmer can be heard behind rock n’ roll melodies. The turquoise walls are plastered from top to bottom with framed photos ranging from legends Frank Sinatra and Roy Orbison to country star Waylon Jennings. Alongside the picture frames hangs a half dozen t-shirts, slowly swaying from the breeze of the cracked door. A sticker slapped guitar lays patiently behind two rotating barber’s chairs. In front of the chairs stands an armoire with two large mirrors and a collection of hair products, combs and beard oils. As the door closes, a mixture of the scents of pomade and moulding wax settles in the air.

You are standing in none other than Scumbags & Cavaliers, one of Brantford’s prominent barbershops.

Rita-Procter feels that it’s important that customers feel like they are coming for a “visit” and not just a few inches off the top. “Other pop-up shops are generic and give you no reason to go to them. They offer convenience and speed, while we provide an overall experience.” Rita-Proctor sees Scumbags & Cavaliers as a place for customers to “come relax, shoot the shit, and get a nice haircut.”

Rita-Procter is proud of his business and wants customers to know that they are walking into “his” shop by putting his unique touch on everything from the atmosphere to the way he cuts hair. The shop has deep influences from punk, rockabilly and outlaw styles and this is clear to customers when they walk in. “We’ve set an image and separated ourselves. Scumbags & Cavaliers is a brand and style, and it gives people a reason to visit,” says Rita-Procter.

This may be why people are willing to wait a while for their haircuts. However, Scumbags & Cavaliers apprentice Craig McIntosh feels that there’s more too it than the branding and atmosphere.

“His passion is what makes the haircut. If he didn’t have the passion it wouldn’t be the same,” states McIntosh.

Rita-Procter’s passion and influences can be seen through some of the products that are carried at Scumbags & Cavaliers. Instead of carrying hair gel, Rita-Proctor advocates for the use of pomade. “Pomade is traditional; Elvis used it, Buddy Holly used it, all the greats used it. But it comes down to manageability, there’s things that quality pomade can do that pharmacy brands just can’t.”

Some of the preferred brands are Grant’s Golden Brand and Reuzel pomade. Grant’s Golden Brand was founded by ex-pro skateboarder, Grant Fukuda and Reuzel’s was founded by Leen and Bertus of Schorem barbershop, in Rotterdam, Netherlands. Leen and Bertus are two of the industry’s leaders in revitalizing traditional barbering.  Rita-Procter thinks very highly of the barber duo, and even named the shop after them as Schorem loosely translates to “scumbag” in Dutch.

When asked why he carried those brands, Rita-Procter simply answered, “Why wouldn’t a traditional barbershop use the best?”

Rita-Procter has experience cutting hair all across Ontario, and spent many years “absorbing the ways that different people work.” His ability to learn with other people is one of the many reasons he has enjoyed having an apprentice, “It’s cool to have an apprentice. I’ve definitely honed my skills through teaching. I’ve learned and relearned and it’s helped passing down techniques to other people.”

McIntosh loves being an apprentice because of all the people he has met and all of the techniques he has learned. He sees Rita-Proctor as one of his biggest influences and is constantly inspired by the passion that he displays daily. Perhaps it’s some of this passion that rubbed off onto McIntosh, as he advocated to start working Mondays. As of Monday, Jan. 18, Scumbags & Cavaliers will be open Mondays through Saturdays, give more people the opportunity to go for a visit.

When asked where they see Scumbags & Cavaliers in the next five years, both Rita-Procter and McIntosh had big ideas. “I’d love to see it grow; more apprentices, hopefully a bigger shop. And it’d be cool if we opened up a barber school,” answered McIntosh.

“In a perfect world,” stated Rita-Procter, “we’ll be in a bigger location. We’ll be a full fledged men’s lifestyle shop and barbershop with a liquor license. Hopefully open up a few more locations…Lookout Huntsville!”