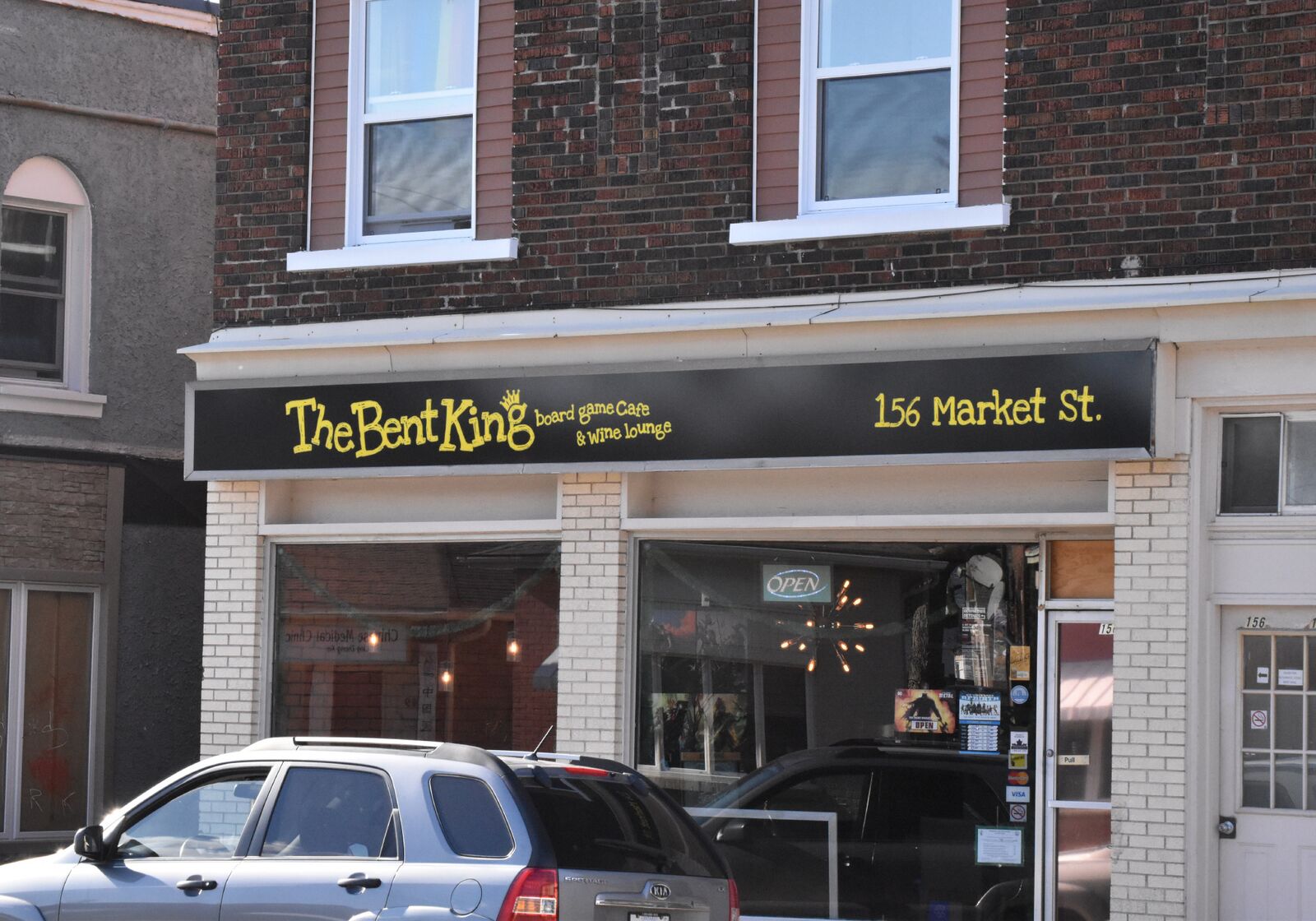 If you’re looking for somewhere to hangout that is cheap and fun, The Bent King Boardgame Cafe is the place for you. Co-owners Adam Dexter and Patrick Huxley opened the Boardgame Cafe on Market Street in April of 2017 and have been serving quality, delicious food ever since. The Cafe offers a variety of baked goods, desserts including edible cookie dough, and meals including gourmet grilled cheese, wraps and nachos. The Bent King makes all their food in house, all the way down to making fresh nacho chips daily. “Quality is before anything else to us, we want to do quality, local, delicious food, so that’s what we’ve been doing.” Patrick explained.

One of the best things about The Bent King is their cheap table rate. They charge three dollars a person and you can play board games for as long as you want. Alternatively to this, if you buy any food item for over three dollars, bring a donation for the Brantford Food Bank, or bring and present your Laurier One Card, your personal table fee is waved. “It’s a way to be a little more inclusive. It’s not just for people in the Game Design program, it’s for everybody that goes to Laurier so they can come here and know they don’t have to spend the table fee to get a coffee and study or do whatever.” Adam explained.

In addition to their food menu, The Bent King offers a variety of loose leaf teas, Balzac’s coffee, mochas, hot chocolate, and a few soft drinks. In fact, they’re the only coffee shop in Brantford the brews Balzac’s coffee and one of few places that sells the beans. They also offer local, unpasteurized honey to add to your drinks.

Along with housing the board game cafe, the seventeen year old comic book store Alternate Icons is located in the same building. They sell comic books, figures, art books, graphic novels, and magic the gathering supplies. They’re also selling board games for the holiday season.

The Bent King is also in the final stages of obtaining their liquor license. Very soon they’ll be offering locally brewed beers and local wines. They’ll be offering beers such as Big Rig Brew from Ottawa, Beau’s from Kingston, Grand River, Bell City and Mash Paddle from Brantford, Abe Erb from Kitchener, and Barncat from Cambridge. They’re also going to offer Frisky Beaver wine which comes from Port Dover, and once Gretzky Estates starts producing in Toronto, that will be offered as well.

Adam, who also works in the kitchen explained what inspired the menu, “I’ve worked in restaurants for about 20 years now, when you work in a restaurant, you have what you like to eat because you’ve tried everything and you know what’s the best. So I’ve tailored recipes for over ten years to make it exactly what I like and then I put that on the menu. So it’s a culmination of what I’ve experienced, and the best things I’ve encountered. That’s how I look at it.”

Patrick explained, “One of the things we hear most from our guests is, this is great quality for what the price is. A lot of that comes down to the knowledge Adam has available to bring low cost items that still bring that great flavour and that hit the spot. Sometimes all you need is a cheesecake smothered in Reeses Pieces and chocolate.”

The Bent King is also very involved in the community. Patrick explained, “We’ve been involved with a lot of local initiatives, things like Scare in the Square, Downtown Detour, and we’re doing the to drive for Brantford General Hospital and Nova Vita right now. We also do catering for a lot of events for not for profit groups like Lansdowne Children’s Centre, the Brantford Symphony Orchestra, and stuff like that.

Adam also discussed the future plans for The Bent King. “I’m really trying to bring the fun things that we had as a kid in Brantford back. We lost Jumbo Video, so we want to get a big popcorn machine, and I’ll put my old membership card on it and whenever someone comes in the door they can have a little bag of popcorn and that’ll be our little kick to bring it back.”

They’re also planning on bringing in some old school arcade games. “Another key thing that we’re doing is working with the PC Museum and Canada’s Video Game Museum. We’re trying to bring back some of the old arcade machines that we grew up with.We’ve to lines on a police trainer, like the old ones cops used that was at The Brantford Mall in the Cineplex Odeon Arcade. We also have a line on an original Area 51 which made its way around Brantford a long time ago. Sid at the PC museum has an old table top Pac-Man. We’ll sort of be rotating them out. That’s kind of the next little step to bringing the fun here.” Adam explained.