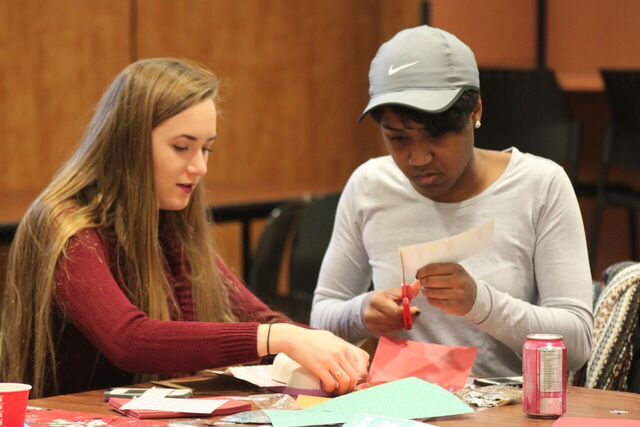 There were 102 holiday cards created for inmates in the Canadian Incarceration Centers.

On Nov. 30, the Law and Society Student Association hosted Laurier’s first ever holiday card party for inmates. About 40 students and faculty met in the Multi Purpose Room for the event.

The event was in partnership with the Prison Correspondence Project that currently has 1200 pen pals in total and 500 that are seeking a match. Students and
faculty were given the opportunity to write for those 500 inmates.

Michael Trimbee, President of the LSSA, said, “We wanted to host a holiday gathering to raise school spirit and have it relate to our program so we came up with a holiday card making party for prisoners.”

Lena Olson, LSSA Campus Co-Coordinator said, “Although they are criminals we are sending the cards to, it is important to understand that in a cold cement place, the feelings of being wanted are limited. This is to remind prisoners they too should have a little happiness.”

Sam Accardi, third year Law and Society student said, “During this time of year, it is important that they know that someone cares and someone wants them to feel special.”

The Prisoners Correspondence Project has three main goals. The first is to coordinate a direct-correspondence program for LGBTQ+ inmates in Canada and the United states, by connecting the inmates with people in the same communities on the outside of prison.

It also aims to bring awareness of prisoner justice within queer movements on the outside through various events like workshops, film screenings and open forum discussions.

Sasha Simmons, part of the Montreal chapter, said, “Queer and trans prisoners are seen as weak and become targets of violence. Trans women are put into male prisons and are not given access to hormones or gender confirming clothing.”

Marty Fink, part of the Toronto chapter, said the two major problems are that there are too many people interested in the program and the bigger issue, that is an endless program.

After the event, students who identify on the LGBTQ spectrum said they are able to correspond with prisoners. In the United States, there is Black and Pink, an organization that runs the same program but without requirements for pen pals.