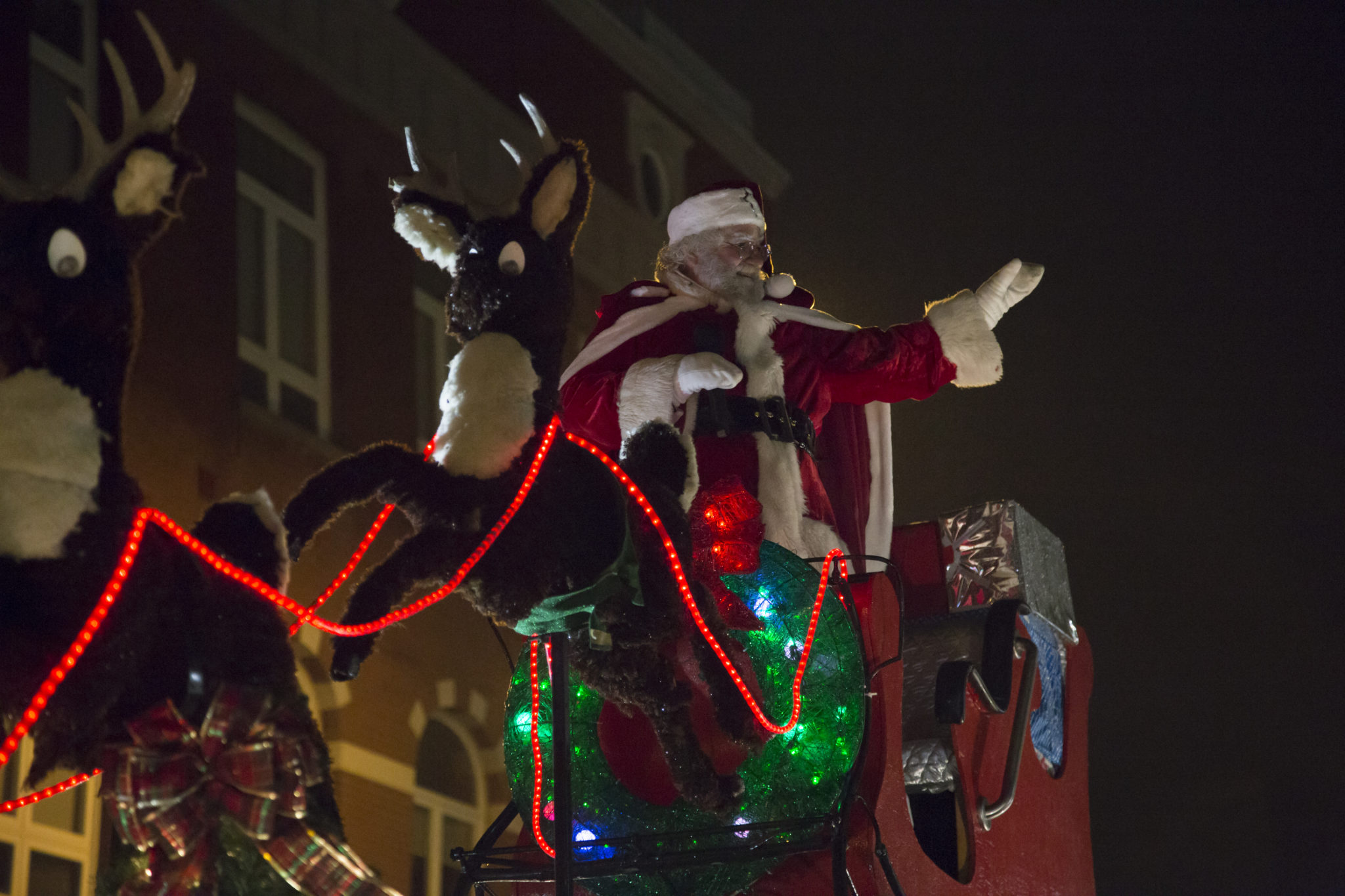 The 44th annual Brantford Santa Claus Parade drew festive onlookers downtown on Nov. 24, all of them excited to start the Christmas season.

Wagons filled with kids and parents camping out with coffees on lawn chairs lined Dalhousie Street between Stanley Street and King Street, despite the cold and rain. 96 entries and six bands marched the 14 blocks, handing out candy and waving hello from their floats.

“It was a huge success and spirits were bright despite the soggy weather,” wrote organizer Junior Chamber International (JCI) on the parade’s Facebook event page.

This year’s theme for the parade was Cinematic Christmas. JCI encouraged floats and parade-goers to come dressed for the theme, hoping to see Whos from Dr. Seuss’ imaginative Whoville or Will Ferrell’s Buddy the Elf. This plan might have backfired to a degree, however, as the parade featured enough Grinch costumes to steal Christmas for the foreseeable future.

Most floats were adorned with “How the Grinch Stole Christmas”-themed decorations, while others featured scenes from National Lampoon’s “Christmas Vacation” or “Frozen”. The most left-field movies turned into Christmas themed floats were a “Jurassic Park” Jeep covered in lights with a person in an inflatable velociraptor costume chasing it and the Brant County SPCA’s “101 Dalmatians” group, which had their volunteers and some of their pooches dressed as dalmatians.

The SPCA took home the award for the Best Service Club/Not-For-Profit, one of the four given out by the parade judges. The other winners included The Rise Centre for Best School, Andrew Schwalm’s Desjardins float for Best Theme, the Brantford Cheer Club for Most Enthusiastic and Desiree’s Angels for Best Overall.

While these entries brought cheers and laughs from the crowd, Saint Nick stole the show.

“I like watching Santa Claus go by at the end,” said Grace, 9, “that’s probably my favourite part”.

“I really like it when Santa comes by too,” said Callum, 7, while smiling excitedly.

“I don’t personally have a favourite float personally because they’re all great,” Kait Miller said.

Pauline Gladu, who has attended every Brantford Santa Claus parade since she moved to the city, felt the same.

“They put the effort forth and it shows,” Gladu said.

Anyone who may have missed seeing Mr. Claus this past week is not completely out of luck. The parade will be aired on Nov. 29 at noon, Dec. 5 at 8 a.m. and Dec. 7 at noon on Rogers’ Brantford station – channel 20 on cable. Santa will also be making stops in Paris, Burford and St. George for their Christmas parades early in December.