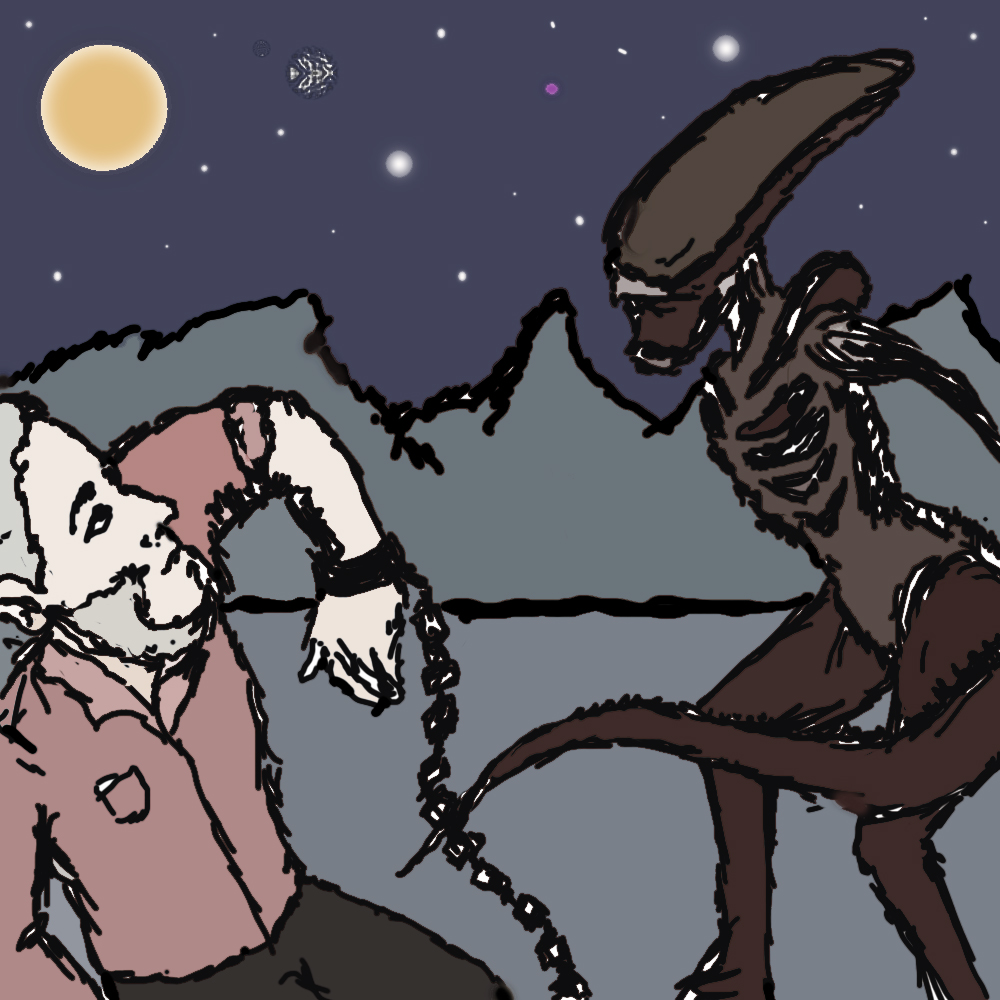 “Big things have small beginnings,” says Michael Fassbender’s robotic character, David, midway through Prometheus.  Indeed, this line of dialogue may be the biggest lie in Ridley Scott’s lackluster blockbuster, with the stark transition from a science fiction film for the first half that then quickly descends into a mindless and weak attempt at a horror film by the end; the movie is actually a small thing with a big beginning.

The movie starts off full of intrigue and sets the viewer up for what appears to be masterful storytelling.  The narrative begins on the spaceship Prometheus, billions of miles from earth, in the last decade of the twenty-first century.  All of the crew, except for the robot David, is asleep in embryonic capsules for two years, which help to preserve them for the two-year journey through space.  Once awoken, most of the crew is in the dark about why they have been brought by the Weyland Corporation to a remote galaxy and are debriefed.

The reason: aliens created us and they are travelling to meet our makers!  The religious people were right; it was intelligent design, just evil alien humanoids instead of an almighty and benevolent God.  The biologist on the ship (and scientists of the audience) is quickly dismissed for maintaining his silly notion of Darwin’s evolution.  The heroine of the film, Elizabeth Shaw (Noomi Rapace) explains — quite definitively I may add — that there are identical star maps (comprised of only several dots) from all of the isolated ancient civilizations of earth.  Since these civilizations are unconnected, Shaw believes it must be an invitation from the «Engineers» or aliens who have made us.  When the biologist asks her why she has come to this crazy-wild conclusion, she gives the cop-out religious answer of faith, «its just what I believe.»  You would assume that a sic-fi flick would do a better job at having a basis in scientific reality, but you’d be wrong.

Although at this point Prometheus has already accumulated several plot flaws, the premise is still very intriguing: what if we had been created by an alien race?

On top of this, the android David is a fascinating character, played brilliantly by Fassbender who is completely devoid of all emotion in the role.  The character David raises several great philosophical ideas and questions.  The first interesting concept being that he is immortal, and with this infinite life, is able to learn infinitely too.  This comes in handy when the crew wants to communicate with their makers, as David in preparation, studies all human languages for years and becomes a master of linguistics.

David also poses a great philosophical question when a crewmember is ruminating on why he was created by aliens only to be asked by David why humans created him.  The crewmember is dumbfounded and can only respond with «we made you because we could.»

This empty answer is the beginning of the chaotic and mindless second half of the film.  When Peter Weyland (Guy Pearce) attempts to speak to an Engineer or an alien creator by using David as a translator, the moviegoer is on the edge of their seat to hear what the humanoid will have to say.  Ridley Scott decides to have the superior species not respond at all; instead it lashes out, murdering Weyland, decapitating David and killing anticipation, all simultaneously.  It seems counterintuitive that a superior being to us would attack unperturbed, when merely being peacefully approached.

A few other noteworthy flaws and blunders of Prometheus are: the ridiculous growth speed of the starfish-alien-parasite baby of Shaw; the change of alien species down the line of transmitted infection (Holloway becomes a mutated and rabid humanoid, yet Shaw becomes a host of a parasitic starfish-alien and the humanoid alien becomes a host to yet another species entirely); the lack of motives of many of the characters, especially Charlize Theron’s character.  Yet, the dumbest flaw of all is Shaw’s desire to travel to find the real home of the Engineers.  She was just almost torn apart by one, yet she still thinks its a grand idea to go find the planet where the lot of them live, instead of calling it quits and heading back home to earth.

Overall, Ridley Scott should be ashamed of the riddled scat he produced.  He tantalized the viewer with false hopes of an epic movie, with a title from Greek mythology and with philosophical questions posed at the beginning of the film.  The end of the movie only answers with a disastrous and childish conclusion, which is laughable and highly disappointing.  Ridley Scott is ironically akin to the Greek titan Prometheus.  A titan in the movie industry, Scott has fallen from the grace of the movie gods and is doomed to a lifetime of making a succession of terrible movies.