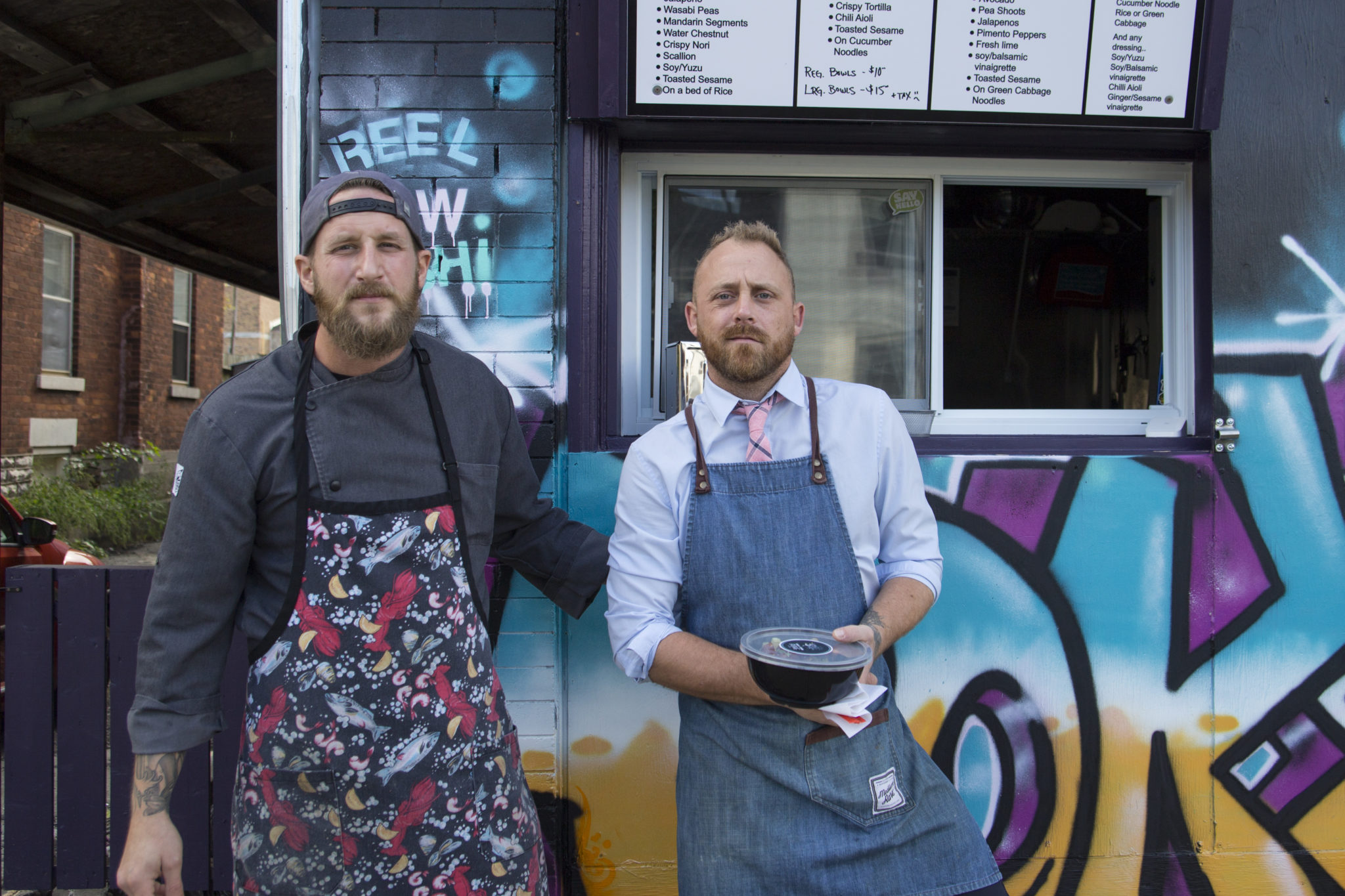 Reel+Raw Poke held their grand opening on Monday, adding another restaurant to the downtown food scene.

“We’re getting really positive feedback on social media,” co-owner Lee DaCosta said. “Word of mouth is really powerful and it seems to be doing the trick so far.”

Reel+Raw is a take-out window that specializes in poke, a Hawaiian dish that is similar in spirit to sushi. The dish was created by Hawaiian fishermen who seasoned spare bits of their catch to eat as a snack.

Poke today uses better cuts of fish, which are served raw and marinated over rice and other vegetables. Generally ahi tuna is the go-to fish, but salmon and shrimp are common as well.

“The best way to describe [poke] and bring it down for people who aren’t familiar with it in layman’s terms, is describing it as a sushi bowl,” DaCosta said.

Reel+Raw opened up shop in a small corner of the same building that holds the bars Brandos and Two Doors Down. The restaurant’s window is a little inconspicuous at first glance, but a bunch of poke themed graffiti and a small sign hanging along Chatham Street serve as Reel+Raw’s beacon for hungry stomachs downtown.

DaCosta and co-owner chef Harrison Miles soft-opened Reel+Raw on Oct. 10, relying on social media to promote their newborn restaurant and draw customers in.

“Wednesday at 11 a.m. is when we slammed our first bowl,” said DaCosta.

“We’ve had a really pleasant response, we’ve sold 100 bowls in two days, 10 pounds of tuna, so it’s been really good.

“I think the delivery is really going to come into play for us, with SkipTheDishes and Uber Eats, so we’re really hoping that’ll pick up. We’re also going to be aiming at students and offices, maybe getting some standing orders and we’ll just do the deliveries ourselves.

“We’re just ironing out the kinks man, that’s what a soft open is all about.”

Though the dropping temperature might drive foodies indoors for hot food and central heating, DaCosta and Miles aren’t sweating. They hope a change in menu, online ordering and delivery will keep customers coming.

“Being a take-out window, I think we’re going to run into some curveballs and work some stuff out,” said DaCosta. “We’re probably going to get into some warmer things come the colder months, we’re going to start playing with some broths and some soups.”

In the meantime, Reel+Raw is celebrating their grand opening with a special promotion. The restaurant is offering a free upgrade to a large bowl if customers promote them on social media.

“Like I said, word of mouth and social media is pretty much going to be all we’re doing for promotion,” DaCosta said. “It’ll make or break us.”

“Anyone that gives us [a] like, share or any kind of mention, we’ll upgrade their bowl for them.”