My March Favourites: The Best of Music, TV, and Film in March 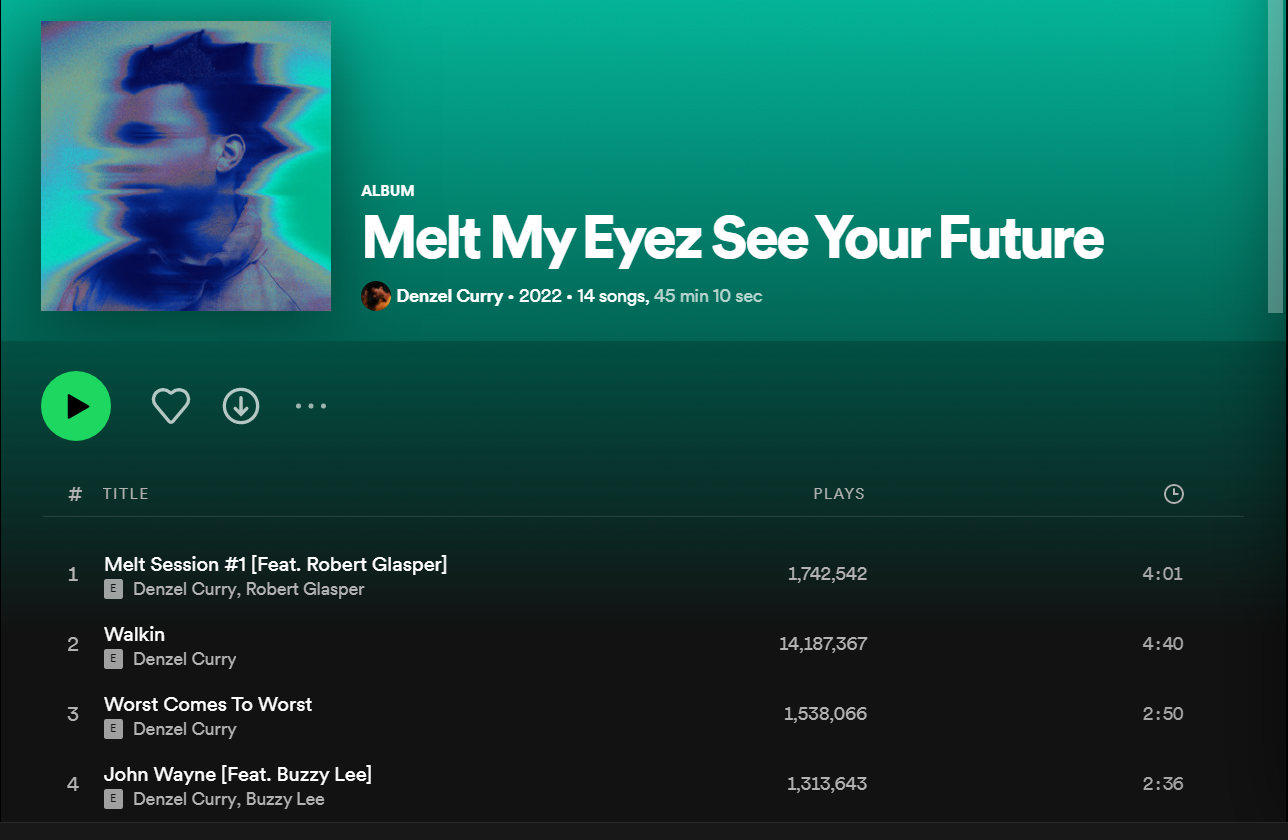 I cannot believe that we’ve already lived through the entire month of March 2022. I am deeply troubled by the rapid passage of time. To comfort me from the horrifying notion that I am perpetually wasting away my youth are the wonderful creations of artists from all disciplines – specifically film, television and music. Here are some of my favourites of those works that have come out this past month.

Here is a drinking game that would get you wasted within an hour if there was available footage of me watching X for the first time: take a sip of your drink every time I said out loud to my friends during the movie, “wow, that’s a great shot!” Though hardly the film’s only merits, X’s editing and cinematography truly make for a love letter to filmmaking as a medium. It is no coincidence that the picture’s plot centres around a group of filmmakers in their own right, with our main protagonists aiming to shoot an adult film and make it big time.

Instead of a take on the thriller/horror genre in which sexuality is wholly condemned by the villain(s) à la The Night of the Hunter (1955), it is mortality rather than morality which drives the film’s gruesome grandparents to take their jealous anger out on the young adults who have in spades what they lost years ago.

Stellar performances are delivered all around, particularly by X’s female leads. Brittany Snow portrays her character Bobby-Lynne with such humour and heart that it’s impossible not to love her. Jenna Ortega is the young Lorraine, a boom mic operator who finds herself surprisingly drawn to the idea of acting in a porno despite her initial revulsion to the project. And finally, Mia Goth, who plays dual roles in X as both Maxine, a wannabe sex symbol with ambitions of becoming a star, and Pearl, the old lady who makes some yummy-looking lemonade and is also an insane killer obsessed with revitalizing the sexual frenzy of her youth.

I was thoroughly entertained throughout X’s 105-minute runtime. The cherry on the cake was the film’s satisfying twist ending which literally made me slap my knee and shout “HELL YEAH!” in emphatic approval (socially acceptable since my friends and I were the only ones in the theatre).

Huge disclaimer though: X is not for the faint of heart… or stomach. One of my pals would hardly say a word for about an hour after we left the cinema, and he ended up vomiting once we got back to his apartment. I gave this film four-and-a-half out of five stars; he asked if zero out of five stars existed on my rating system as he wishes he never watched the movie to begin with. Needless to say, he was deeply disturbed. So, consider yourself warned: X is a slasher film through and through. It is depraved, it is indulgent in its portrayals of gore and sex, and it explores the relationship between these two camps rather perversely.

However, if you love a well-crafted cinematic experience that is creepy and violent yet simultaneously thoughtful and funny with a group of charming characters who you’re hoping won’t get hacked to death by two deranged albeit sympathetic antagonists (even though they most definitely will), then X surely is the film for you.

Favourite Line: “This must have been one goddamn horror film.”

It’s a pretty rare occurrence that I hear an album by an artist I hardly listen to otherwise and know immediately after the first run-through that I’ll be coming back to that record for a very long time. That’s exactly the realization I had begun to make as I approached the final tracks on Melt My Eyez See Your Future.

On his fifth studio album, Southern rapper Denzel Curry, perhaps best known for trap hits “Clout Cobain” and “Ultimate,” delivers one of the most thoroughly gripping musical projects of the year thus far.

Much of Melt My Eyez See Your Future had me feeling like a fly on the wall at a session between Curry and his therapist, in which he bares his soul more articulately and authentically in 45 minutes than many people do in their entire lifetime. Throughout Melt My Eyez, the album’s troubled narrator laments over struggles with race, politics, violence, alcoholism and more. Curry ponders on the troubles of his life, the experiences of black community at large, and where he fits into it all.

“The same ‘ol story in a whole different era / I’m watchin’ massacres turn to runnin’ mascara,” he raps in vivid distress on “Walkin”, probably my favourite and perhaps the lyrically darkest track on the record (though there are many contenders in both of these categories).

The album is a cohesive fusion of introspective jazz rap and lush trap production that manages to stay focused without any of the songs feeling like they blend too much into one another. A difficult feat to achieve, yet Curry seems most at home as he strikes an effective balance between new school Southern rap and old school hip-hop tradition. In the best way possible, album closer “The Ills” is straight out of the 90s, when hip hop’s Golden Age was churning out jazz rap classics from the likes of A Tribe Called Quest and The Roots.

Despite a relatively mellow consistency throughout the record, Melt My Eyez still has a few surprises up its sleeve, especially towards its tail end. Tracks “Sanjuro” and “Zatoichi” are trap-adjacent heavy hitters that will jolt you out of your chair in case some of Curry’s more chill deliveries were lulling you into a false sense of security.

With several features, including those of radio-bait autotune king, T-Pain, and dynamic firecracker, Rico Nasty, nothing on the album is out of place or unnecessary, but Curry doesn’t rely on anyone else’s talents to deliver.

All in all, Melt My Eyez, See Your Future is the tremendously solid result of an artist looking to the future but also nostalgically tethered to the roots of his genre. Denzel Curry gained a new fan this month.

Favourite line: “I started in nightmare so pinch me, I’m dreamin’ / I’m killin’ off my demons ‘cause my soul’s worth redeemin’” – from “Walkin”

Although the series’ first episode aired in December, weekly releases have provided viewers with a steady flow of ABC’s new show, Abbott Elementary, with two new episodes having been released in the month of March. And thank goodness for that, because this is one of the best comedies on television right now.

Filmed as a mockumentary in the stylistic manner of The Office and Parks and Rec, Abbott Elementary revolves around the passionate staff at an underfunded inner-city school in Philadelphia. Unlike both of the aforementioned TV shows, Abbott Elementary comes out swinging with a consistently uproariously entertaining first season.

The six main characters, each with bizarre quirks, are unique and relatable. The terrific ensemble cast does the writers’ room justice, and vice versa. It is difficult and rare for characters to be developed this well this early on in a sitcoms’ run, but here we are. Main character Janine, portrayed by series creator/showrunner Quinta Brunson, is a second-grade teacher who loves her job and her students. She’s optimistic, enthusiastic, and completely obsessed with gaining the approval/friendship of the experienced, esteemed, and mildly cynical long-time Kindergarten teacher, Barbara (played by the inimitable Sheryl Lee Ralph).

Though the entire ensemble of characters is brilliant, the shining star is Principal Ava (played by comedian Janelle James), who obtained her position as Abbott’s head honcho by blackmailing the superintendent. Ava is hilariously unqualified and, unlike The Office’s terrible boss Michael Scott, is basically indifferent to the everyday comings and goings within her workplace. She should be a deeply annoying character given her supreme self-absorption, but James’ portrayal is consistently the funniest on the screen to the point where I miss her as soon as she isn’t there.

Now, combine all this together, and what do you have? A series that is greater than the sum of its already individually effective parts, to be sure. Not five minutes of a single episode can go by without me audibly cackling, which can get particularly troublesome when I’m streaming the show in a public space. There is also significant attention being brought to the underfunding of inner-city public schools. Similar to how Scrubs (another favourite sitcom of mine) pulls back the curtain on some of the less-discussed issues that come with working in a hospital, Abbott depicts the sad reality behind elementary school underfunding and the ways this affects staff and students alike.

With many of today’s most talked-about shows being Very Serious dramas that can leave me feeling a bit sunk after finishing an episode (I’m looking at you, Euphoria, Ozark, Squid Game, etc.), Abbott Elementary is an uplifting series with plenty of heart and, most definitely, a funny bone.

It’s shows like this that remind me how grateful I am that The Office came along and ushered in this highly effective style of single-camera mockumentary storytelling in sitcoms. And, unlike Ti West’s X, Abbott can be enjoyed by all age groups and dispositions. So, as you head home for the summer holiday, I recommend flipping on the ‘ol TV, sitting down with your family, and basking in the hilarity of this great series together.

Favourite Line: “Girl this ain’t a sorority. I ain’t shoplifting Plan B for you.” – Principal Ava [to Janine, who is trying to prove that the Abbott staff are a “work family”]