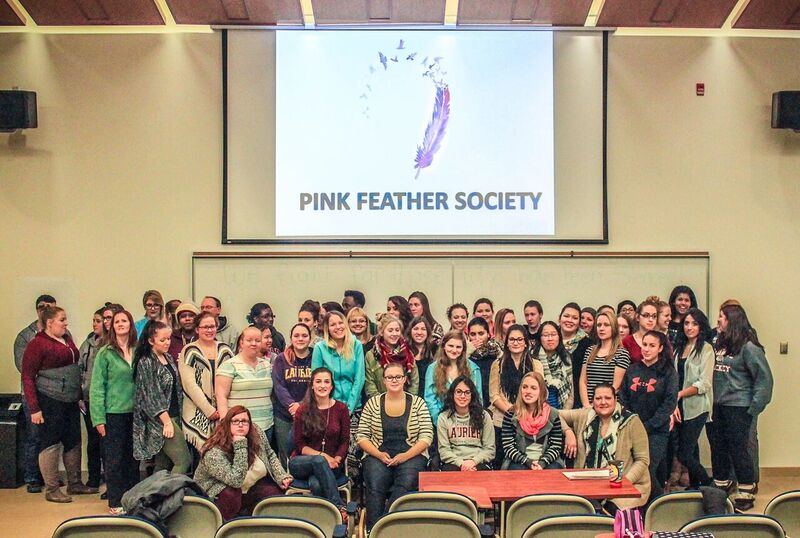 “We are trying to raise awareness towards missing and murdered Indigenous women & children, as well as fundraising for the victims families,” said Mat Beaulieu, a student at Laurier Brantford who is part of the organization.

“Raising awareness also helps bring accountability to the government. They have known about the growing number of missing and murdered Indigenous women for years, but have not taken action to combat the issue. In 2008, former Prime Minister Stephen Harper made an apology to the Indigenous peoples for the inhumane treatment they faced in the Indian Residential School system. This apology was supposed to be a beginning to the path of reconciliation between Canadians and the Indigenous peoples, however, the government has yet to actually do anything that shows change.”

According to their mission statement, “as a direct response to the challenge of the Government of Canada, the Pink Feather Society partners with communities across Canada and Indigenous peoples to address the crisis of missing and murdered Indigenous women and girls. We provide resources, education and awareness on this national tragedy. We fight for those who have been silenced.” They hope to see “ women, regardless of race, ethnicity, social and cultural background…be free from exploitation, discrimination and abuse.”

“The Pink Feather Society was primarily created to provide funding, resources, and education to the people affected by the issue of missing and murdered Indigenous women in Canada,” said Beaulieu. These students think that this country is quite uninformed about what is happening to these innocent Indigenous women and children and they are hoping to change that by raising as much awareness possible.

Since this organization, is student-run, it is unique. As young people and the new generation of this country, they hope to inspire others, “The beauty of having a student-run group such as the Pink Feather Society is that we can hopefully inspire other students like ourselves who have the same passion for social justice. I feel as though students possess the most influence on creating change. Students are able to network to other students, and those students will tell other students from different schools, and it will create snowball effect. That’s what we are going for,” said Beaulieu.

This organization is supposed to be a class project, but it feels like so much more to the student’s who are a part of it. Even after the semester is over, many of the students plan to continue working with this group. They have many future plans for this organization. “I talked to the students in this organization, and as for future plans they want to raise awareness on generational trauma faced by the victims of missing and murdered Indigenous women and children, to ensure that the issue stays a priority with all levels of government, and to provide financial assistance for funeral costs of those victimized by the issue.”

Since this organization is a direct response to the challenge of the Government of Canada, they hope it to even reach Prime Minister Trudeau. “It is one of our plans to get Prime Minister Justin Trudeau to speak out about the issue/ our group, whether that be over Twitter, a speech… Even something as small as wearing a Pink Feather Society pin during one of his speeches would be a good start in helping us carry out our mission statement,” said Beaulieu.