Rape culture and campus culture, an unfortunate partner in crime 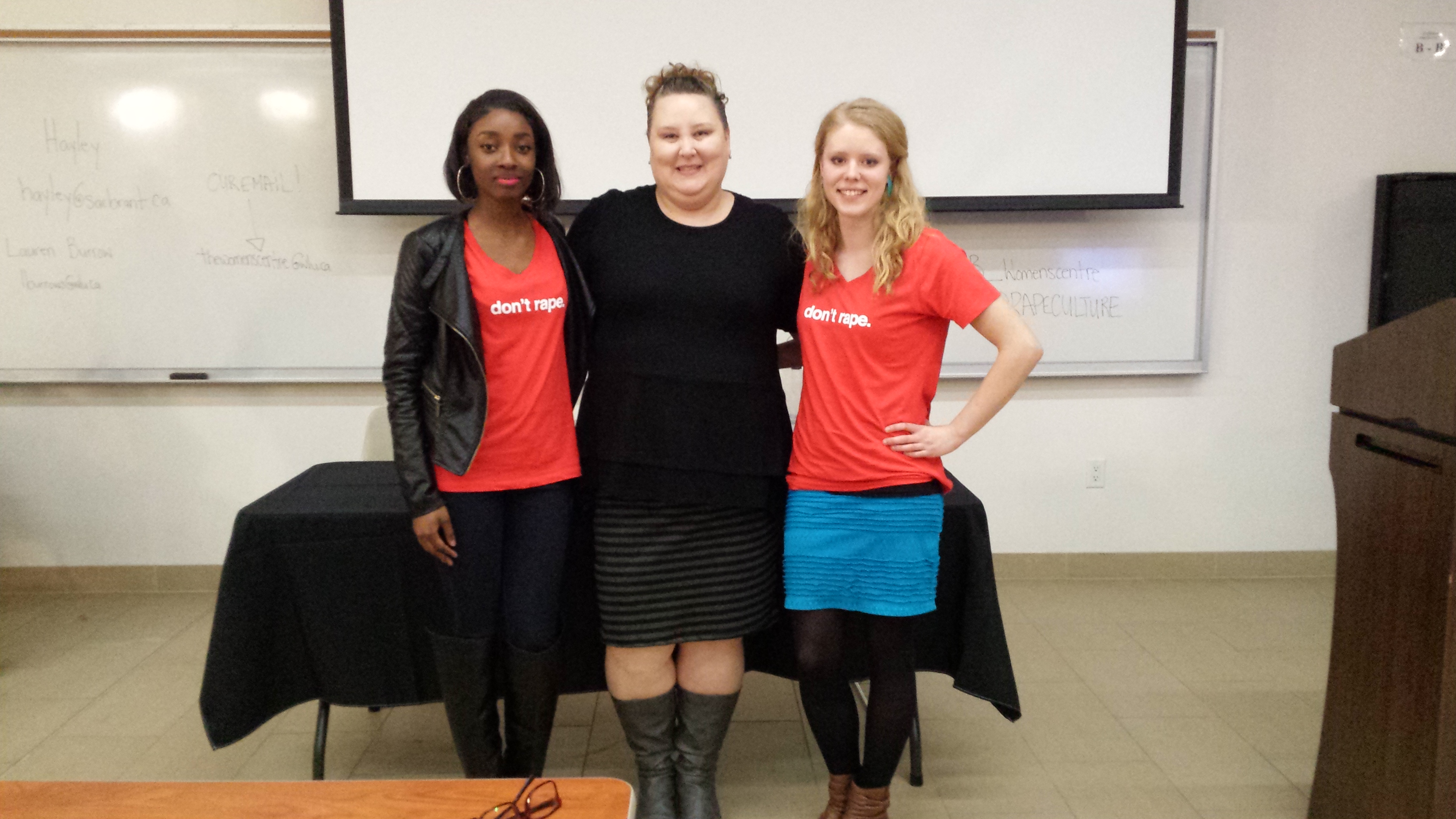 Disclosure: Brittany Bennett is a co-founder of Advocates for a Student Culture of Consent (ASCC)

“Don’t rape” the red and black shirts spell out for us as volunteers move about the front of the room, preparing for the screening. The scent of cheese and tomato sauce wafts in while boxes, upon boxes of pizzas pile up at the front table. It is 7 p.m., just about dinner time for the typical student. The mood follows suit as people stand from their seats and start to line behind the pizza, fruit and veggie trays.

“Laurier Brantford’s Women Centre presents The Hunting Ground. A documentary screening and discussion” outlines a poster just outside of RCW 202. It is one day after International Women’s Day, March 9, and the room is filling up.

The first row of tables is covered with sexual violence resources and pamphlets. The overhead projector displays a slide show of the resources as well, consisting of information such as: victim services, help lines, LGBTQ support, specific resources for Laurier Brantford, as well as health care and accessibility resources.

A contagious grin spreads across the volunteers as the audience surpasses 60 people before the film begins.

The hostess for the night, Sarah Cifani, warns the audience that topics covered in The Hunting Ground and the discussion following may pose trigger affects for individuals with past experiences of sexual violence. Cifani asks that anyone leaving the room give a thumbs up to display they are alright, and if not, a support member will follow to make sure they are okay otherwise.

Cifani found herself asking, “What does it actually mean to be a woman in 2016? And realizing, that doesn’t mean the same thing for every single woman.”

Throughout the film screening the audience is incredibly engaged. Not a single whisper off topic can be heard in the background, and hands cover many of their mouths as they learn these students’ tragic stories of sexual violence on campus.

“Because you had sex and a woman said no, are you a rapist automatically because of that?” Gasps and mummer spread across the room as the audience is bewildered that the student in this film had complete disregard for the definition of rape.

The Women’s Centre is a space that educates on topics such as these, completely survivor-centric and free of victim-blaming. The centre is currently open from 12 p.m. until 4 p.m. from Tuesday through Thursday for all self-identified women. “As we stand right now, men are not allowed in the centre, because for women it could be triggering and we just want to make it that space that’s safer for women, where they don’t have to feel like they’re on guard,” explains Cifani.

Male survivors seeking support are encouraged to reach out to the sexual violence councillor and advocate of the Brant Sexual Assault Centre, Hayley Moody. Men that are wishing to support a woman who is seeking assistance from the Women’s Centre are encouraged to reach out to Moody as well. Moody will work with male supporters to come up with the best solutions of assisting the survivor together.

Moody offers counselling on a drop in and scheduled basis at the Women’s Centre.

“She’s an excellence resource if [confiding is] something you’re thinking about, or perhaps maybe a friend, and you are wanting to provide some options, Hayley would be a good option, and also Lauren, the education and inclusion officer,” explains assistant professor, Jenn Root.

Root is a Laurier professor who specializes in intimate partner violence. She is also a part of the Gendered Violence Task Force, and a member of the Collective for Feminist Action and Research group.

Root was one of three panelist speakers leading the discussion after The Hunting Ground left the audience in awe.

Root discusses the Laurier-affiliated groups and resources available that are currently combatting issues of sexual violence on campus. Root notes that the gendered violence faculty colleague positions within the Gendered Violence Task Force have been doing a phenomenal job. On the Brantford campus, this position is held by Rebecca Godderis, and Root says she works to answer the question: “what should we as an institution be doing to kind of lead and keep this momentum moving forward in terms of responding to gendered-based violence?”

A three-step disclosure training is given by Root, mirroring training she had received prior from Hayley Moody. Root says that you need to listen while adapting a believing state of mind, give some sort of validation and then provide options that the survivor could use as resources, without any pressure to do so.

A second panellist, Tolulope Ojo discusses the role of race and sexual violence. Ojo is pursuing her master’s degree in cultural analysis and social theory, and is the inclusivity coordinator for the Women’s Centre.

“A lot of people often think that women of colour are un-rape-able. They often see the issue as insignificant, justifiable, and that is obviously problematic because there’s a lot of victim blaming, and for that reason, a lot of women of colour are more vulnerable to being sexually assaulted,” explains Ojo. Ojo stresses that sexual violence is seen across all races, and the cultural or ethnic background of a person may affect the way they handle actions of sexual violence as well. Ojo says that some people of colour have strong religious backgrounds that could affect their decision to confide after an act of sexual assault. In some cultures sexual activity is looked down upon at certain ages and under certain circumstances, such as being unwed, even if it is done against the person’s will.

“Perhaps rape culture looks a little bit different [in The Hunting Ground], but we definitely do live in a rape culture here at Laurier and at all universities in Ontario, Canada and around the world,” says the third and final panelist, Karly Rath.

Rath is a Laurier Brantford alumni, co-founder of Advocates for a Student Culture of Consent (ASCC), and a creator of Laurier’s official consent campaign, Consent is Golden. Members of ASCC are currently working with many community partners and Laurier-affiliated groups towards implementing a response to the sexual violence policy and protocol here at Laurier.

Rath discusses what a rape culture looks like on the Laurier Brantford campus. She states that a Laurier driven research initiative called the Change Project found that about 40 per cent of the students at Laurier have experienced a form of gendered violence.

Bibi displays her excitement at the turnout of the film screening event. She smiles and says how surprised volunteers were at the number, especially when male members joined.

Fourth year health studies student, Lauren Moritz had already seen The Hunting Ground previously but still came out to watch it again. “I think it does a really good job of highlighting rape myths,” she says. “I really enjoy it, I think more people should be seeing it.”

Bibi is at a loss for words when thinking of everything she has learned from the film and discussion. “For me, the whole movie was of its own. But the statistics of all the universities…”

“1 in 5 women are sexually assaulted while in college.”

-Statistics courtesy of The Hunting Ground.