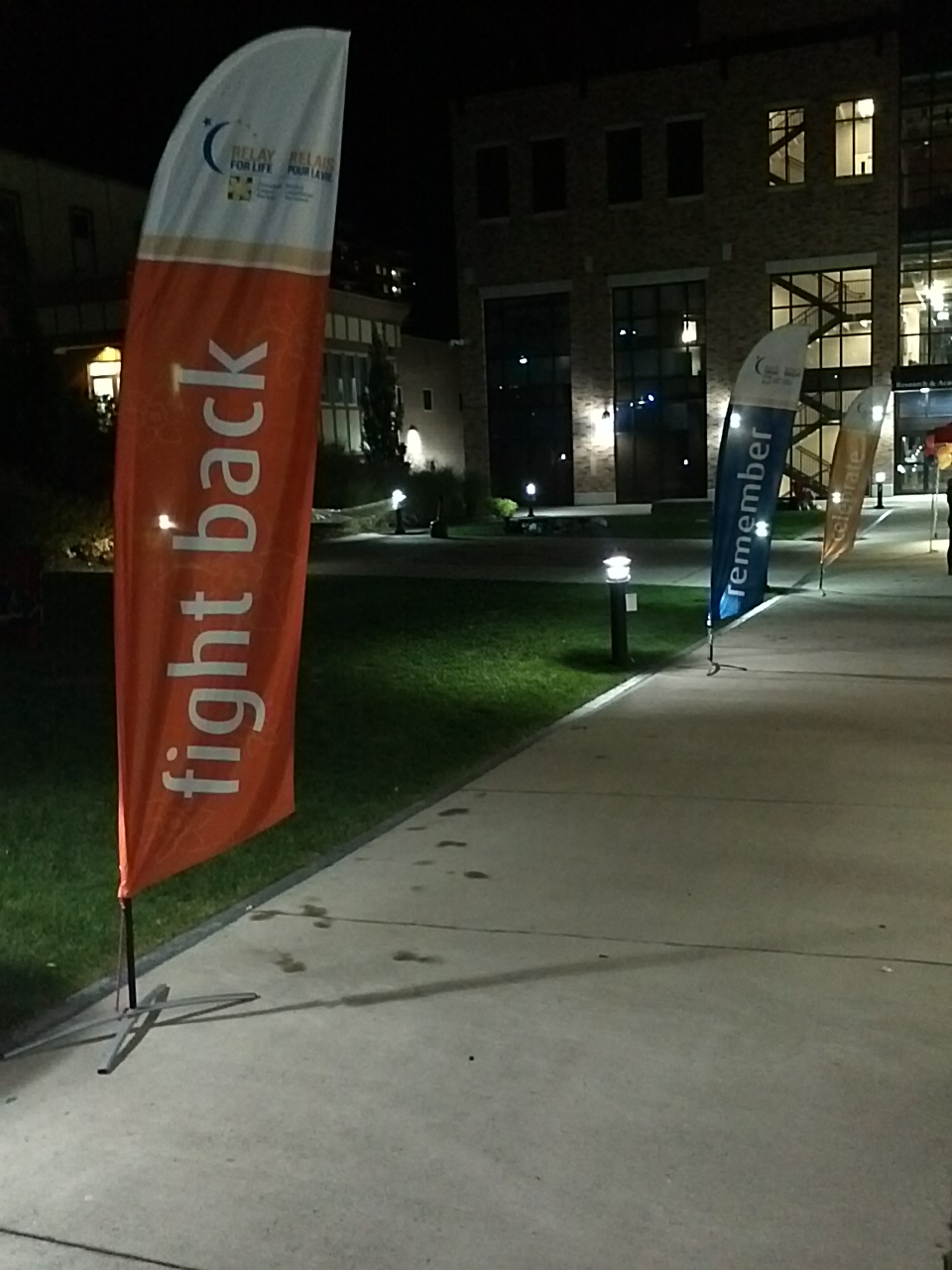 It was a night of mixed emotions, both highs and lows, as Laurier Brantford students and some administration came together to celebrate, remember, and fight back. Participants gathered outside, at the Research and Academic Centre West courtyard to walk a course, from 7 pm to 7 am.

“I think the event motto: ‘celebrate, remember, and fight back’ summarizes it really well,” commented Aidan Oatridge, a first-year Law and Society student, and volunteer for the event.

Students, registered in teams, walked together on a designated track that weaved through the RCW courtyard, running along the side of the building, and back through the student centre parking lot. However short the track, it was no easy feat for the participants, of which many walked for hours in chilly temperatures to support those touched in some or another way by cancer.

“Even with the cold weather, there were people continually walking on the track. It just shows that Laurier Brantford has troopers, and a great group of dedicated students,” said Michelle Knight, the campus’ Event Chair for Relay for Life, of the participants’ devotion.

In addition to the walk itself, there were a series of scheduled activities which included a concert, courtesy of James Gould; Dance-off; Sugar Rush; and an opening speech from cancer survivor, Kara Box, a recent McMaster graduate. Knight expressed appreciation for Kara’s speech, describing it as “really inspirational.”

The event concluded a series of smaller fundraising events hosted by Laurier Brantford’s Relay for Life committee, of which included the candy kabob sale and bake sale. Individual participants were given the liberty to raise funds for the cause as they desired, without any restrictions, according to Knight. The fundraising numbers totaled $13,269.13 for the cause, which will be submitted to the Canadian Cancer Society.

As much as the fundraising can benefit those afflicted with the disease, the Relay for Life event series did only serve such a purpose. It also served to create more awareness on a serious health detriment that exists in society.

“Education is a big thing,” Knight commented. “Our events are more about promotion than raising money.”

There is a common perception of cancer as a disease that usually afflicts those who are in their middle years and later. However, that is not the case, considering there are those who can be struck by it at a younger age, as Emily Runstedler, a third-year Concurrent Education student and volunteer, believes.

On the nature of the disease’s ability to affect subjects of any age, Runstedler asserted, “This is a serious issue, especially when there are people in high school and elementary school getting cancer.”

Stephanie Ryglewicz, a fifth-year Concurrent Education student, explained that cancer doesn’t just affect the afflicted, but also those who are related to the afflicted, ”I think it’s important to raise awareness and money for research, because a lot more people are affected.”

Knight added that while she may not have had any immediate family or friends affected by or lost to cancer, the concept behind Relay is about cancer in society as a whole and not necessarily the individual’s relationship to the disease.

“It kind of touches everyone on some scale,” she said, adding, “You can tell tonight a lot of people have been affected, in some way by cancer, so this is a great opportunity for students to help make a difference.”

With another batch of dedicated students raising awareness and funds this year, in accordance with past years, Laurier Brantford’s Relay for Life committees will hope to continue these trends into the future, hoping to once again ‘celebrate, remember, and continue to fight back.’