“The person we’ve hired has really made the position, and I think that’s key to this. We have a caring, compassionate, smart, confident, strong, intelligent person,” says Adam Lawrence, Laurier Brantford’s dean of students. 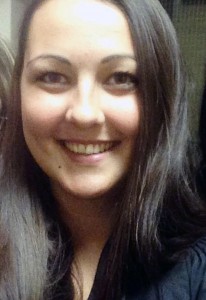 This person is Hayley Moody, Laurier Brantford’s sexual violence counsellor and advocate. Beginning just this past October, this pilot position was developed by Laurier senior leadership and the Sexual Assault Centre of Brant (SAC) to support the mandate of Laurier University’s Gendered Violence Task Force. Student Affairs gave one-time funding for the part-time sexual violence counsellor and advocate position to run from October 2015 until the end of May 2016.

Although funding has been provided through the university, it was the signed agreement with SAC that made this position possible.

Godderis has been working with SAC for over six years on various university-community initiatives and research projects. “They are really one of the only organizations in Brantford that focuses just on sexual violence,” says Godderis. “It’s really the Sexual Assault Centre that is the sight of expertise in the community for sexual violence.”

One of the most compelling parts of connecting with SAC is their ability to provide 24-hour support, and accessibility for students as they grow outside of the university. The current executive director of SAC has been there for 20 years, and has made many community partners through the centre’s great reputations.

“To be able to have our own counsellor and advocate hooked in to that additional network is so amazing.” Godderis cannot help but smile.

Hayley’s expertise seeks to assist anyone seeking guidance in the area of sexual violence, whether you are a survivor yourself or supporting one. Godderis explains Hayley’s approach as one with an intersectional lens, an anti-oppressive lens and an anti-racist lens. “All of those things make her a very bright person, but she also has a certain … gravitas – to be able to walk in to a room and claim some space,” says Godderis.

On top of counselling services, Hayley’s position is able to advocate on a survivor’s behalf both within the university and through those tough external processes. Depending on the route the survivor choses to take, Hayley can assist students to hospital or doctors visits, to police interviews, to hearings or meetings within the court system, to peace bonds and more. Hayley can also work with the university in a way to help students with academic accommodations while still keeping confidentiality at the survivor’s request. The most important thing that Hayley stresses is that all these processes are led at the discretion of the survivor. “Letting them know that I’m there to support them, so that means I will never ever, ever pressure a student to do something, ever. I am only there to provide options and support, they’re completely in the driver’s seat,” she explains.

As the dean of students, Lawrence has heard nothing but positive feedback about Hayley, especially regarding her accessibility. Hayley says she tries to respond emails within two days, at the most, and is always willing to meet up at the survivor’s convenience.

The sexual violence counsellor and advocate position is here to support student survivors in whatever way they need as an individual. Hayley is very open to many different ways of helping through this healing process. “How can I support you? If that means making cookies with other survivors, then that’s what I’m going to do,” says Hayley.

“Long story short, just do whatever we can to make sure the student is feeling as comfortable and as supported as they possibly can within the university and within the community,” Hayley explains.

Hayley says that her work as the sexual violence counsellor and advocate is 100 per cent, completely confidential. The only possible breach of confidentiality would be if the survivor, or community at large were at an immediate risk of danger. Hayley stresses that simply speaking about self-harm or suicide does not trigger this assumption; it is when a survivor makes a direct statement to purse attempting suicide that this immediate risk is interpreted. Even if this breach of confidentiality is necessary, Hayley says that she will always communicate with the survivor in order to work out how they are going to go about resolving any risks together.

“There could not be a better person for the role, and she has really won the love from staff on campus,” says Lawrence. Hayley’s office is currently in Laurier Brantford’s Women’s Centre that opened up this past January. She is located right beside Laurier Brantford’s Diversity and Equity Office, an office full of staff and faculty Hayley has already made great connections with.

By having her office on campus, while still working under the authority of SAC, Hayley’s position fills in the gaps between the university and outside community organizations. Hayley admits there is only so much each can do on their own, but this position is showing that there is much that can be accomplished when working together.

The senior leadership that innovated this pilot project had been asking, “do we really need to continue to replicate all of these services inside of the institution or can we pull on the expertise of our community partners?” Godderis explains, “we don’t need to invent this wheel over and over again, there’s a place that knows this stuff inside and out.”

Hayley has gone through over 100 hours of training thanks to SAC to prepare herself for excelling within the sexual violence counsellor and advocate position.

Hayley likes to begin her conversations with survivors by explaining a little bit about herself. “I know that for me personally that was always really important. I’m not just going to go somewhere, sit down and just tell my life story to them when I don’t know anything about them,” she says. Hayley completed an undergraduate degree in Political Science and Indigenous Studies within McMaster University, and finished a Masters of Arts in Social Justice and Community Engagement on the Laurier Brantford campus.

It is easy to see that passion is a natural motivator for Hayley, as she can hardly stop to take a breath while talking about her work with SAC and the Women’s Centre. Hayley portrays both excitement for the position as a whole, but also seriousness in doing everything she can to help people through the tragic repercussions of sexual violence.

“Just being a student on a university campus and seeing for myself personally that there was a very severe lack of those services and supports, even in relation to how sexual violence was talked about and how it was portrayed in the media, how it was portrayed in McMaster where I did my undergraduate degree… I just saw this very, very serious need to start having these conversations, so I had these conversations everywhere I went,” she tells.

Hayley was a part of the Women’s Safety Action Group that advocated for Laurier Brantford’s very own Women Centre. “One of the things I love about the Laurier Brantford campus … but there’s such a strong social justice, intersectional-feminist community,” explains Hayley.

Although Lawrence hates to admit the disheartening fact that a position such as Hayley’s is needed, the reality is that support for sexual violence on a campus culture is a necessity.

The Gendered Violence Leadership Group has requested to Laurier university budget managers to continue the sexual violence counsellor and advocate position on the Brantford campus full-time. “We are very supportive of this pilot project continuing, we understand the demand for Hayley is more than a pilot can attest,” says Lawrence.