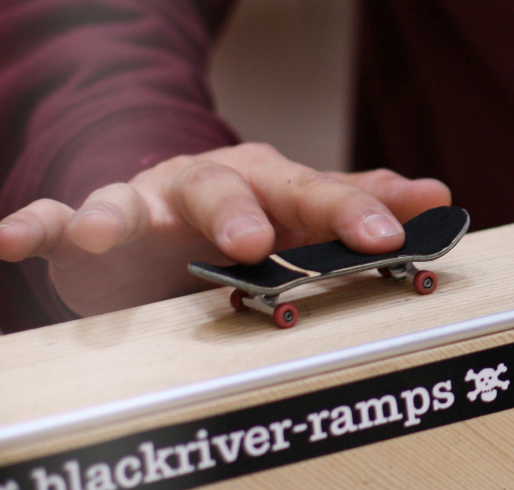 Fingerboarders of all ages were flipping out at the first ever Downtown Showdown fingerboarding competition on Mar. 19. For $10, you gained access to the Market Square fountain, received a raffle ticket, and got as much pizza and pop as you could carry.

The Downtown Showdown was hosted by Joycult Wheels, a fingerboarding wheel company based in Brantford. Joycult Wheel owner Matt Watkinson stated he was very happy with the 45-person turnout at the competition. Some contestants came from as far as Pennsylvania to witness the technical skills that were on display. “It’s so insane, it trips me out just saying that,” stated Watkinson.

Watkinson stated the competition planning was fairly smooth thanks to support from the community and sponsors. The Downtown Showdown had a number of sponsors, including Blackriver, Berlin Wood, ASI Berlin, Beastpants, fingerboardingisfun.com, Kapital Krete and Flatface.

Although Watkinson opted out of the classic contest format for the competition, the fingerboarders cheered in excitement as the raffle prizes were announced. Watkinson handed out a number of unreleased Joycult fingerboards and wheels as prizes. A number of the contestants walked away with one-of-a-kind items.

Business has been booming for Watkinson, who is currently having minor “supply and demand problems” with products, as fingerboarders want more wheels than Joycult can currently produce. “We’re in a weird phase at the moment, however, we’re still well-received,” said Watkinson.

Joycult Wheels is a young company, having been founded in January 2015 with help from Laurier Brantford’s Launchpad. Launchpad is an entrepreneurship program designed to help individuals start companies with minimal risk. However, Watkinson stated that Launchpad is not a handout. Individuals have to test markets by interviewing potential customers, making connections and by “putting yourself out there.”

“A lot of people throw money at bad ideas,” stated Watkinson. “Launchpad allows you to feel comfortable putting money into something.”

Watkinson stated that his initial experience with Launchpad was an “experiment,” as he was one of the first non-students to get into the program. However, Joycult gained popularity faster than many of the other start-ups from Launchpad, and it has “opened a lot of doors” for Watkinson.

Watkinson has maintained a good relationship with Laurier Brantford Launchpad. He visits on a weekly basis and has gained access to many of their contacts. Laurier Brantford owns Market Square, and being involved with Launchpad gave him the opportunity to host the event there.

Although there are no concrete plans, Watkinson hopes to host another fingerboarding event in the future. For the next installment of the Downtown Showdown, Watkinson wants to have more parks and prizes for the contestants.