Laurier Brantford has been #NekNominated 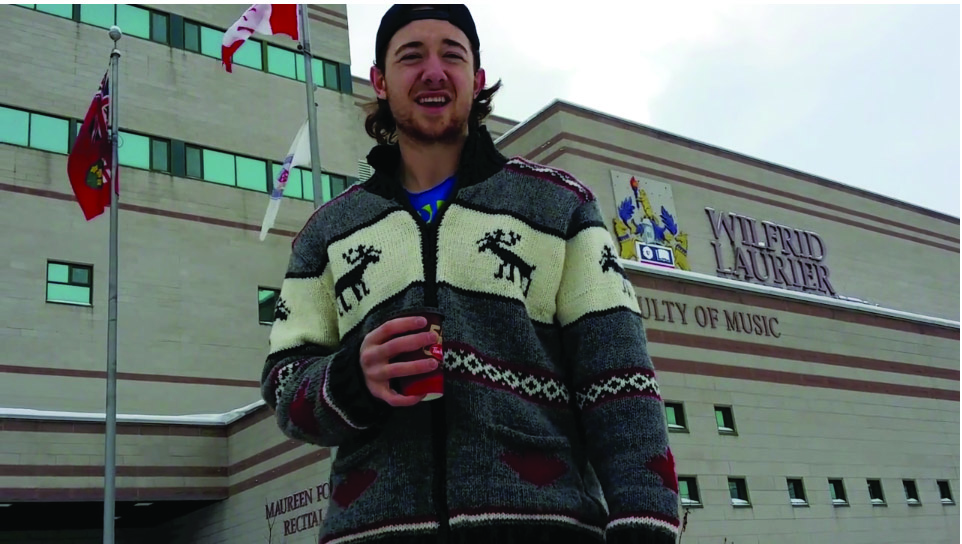 The new fad of Nek Nominations has swept across Facebook, and Laurier has been challenged to change it for the better.

Nek Nominations are rumoured to have started in Perth, Australia and have spread like wildfire across the globe. The game works by nominating your friends to creatively drink alcohol, do something absurd and post a video of it on Facebook within 24 hours. The chain goes on.

The topic is highly controversial; many people find it fun, while many others find it dangerous, especially after the four related deaths in Ireland and England. The deaths of Ross Cummins, age 22 and Jonny Byrne, age 19 from Ireland happened soon after the taping of their Nek Nomination videos. Byrne was found in the river under the bridge he jumped off of for his video. Cummins’ death, as well as the deaths of British Isaac Richardson, age 20 and Stephen Brookes, age 29 were suspected to be caused by alcohol poisoning.

Students at Laurier Brantford had a lot to say about Nek Nominations, but the majority seemed to think it is a bad idea. Third year student Erine Roberts referred to Nek Nominations as a stupid and dangerous pastime. “What do you get out of it? What is the satisfaction? I don’t agree with it, I don’t think people should participate in it, and I’m hoping this trend just phases out,” she said.

This was a common opinion among most students on campus. First year student Ali Saghari called it an idiotic trend that he hopes will end soon. He said, “If it doesn’t hurt you physically, it’ll hurt your chances at potential future jobs, and it also makes some friends (like me) and your family, question your life decisions.”

Some students, like second year Riccardo Spadano, disagreed with the premise of the game, but still saw the good side to them. He said, “Nek Nominations are actually really funny.” First year student Lauren Stephenson had also thought they were funny and entertaining when she first noticed the trend on Facebook, and even participated in making one herself. But her ideas soon changed drastically as she heard of all the inappropriate things people were doing in their videos, along with the two related deaths. She said it was something that she no longer wanted people to see, and took down her own Nek Nomination video.

“There is another side of the game, which I believe to be very inspiring … and to me, as a student, I think these are much more encouraging and exciting,” said Stephenson. She referred to the new and improved Random Act of Kindness (RAK) Nominations. This game has the same idea of Nek Nominations, but instead of drinking and doing something absurd, one has to videotape themselves doing a random act of kindness.

Laurier student Dorian Wilson from the Waterloo campus was one of the first to start this nomination trend with his video, “A Canadian Take on #neknomination.” Wilson’s video played the popular song “Say Something” by A Great Big World and showed his disappointment while watching other Nek Nomination videos. He then bought a $50 gift card at Tim Hortons and gave it to the worker in the drive-through to use on all the cars behind him, when he only used it to buy one medium coffee for himself. At the end of the video Wilson nominated two of his friends, and said, “I also want to nominate all the students at Laurier, because you know what? We can do great things today, and I think we all need to.”

“I think that’s such an interesting offshoot of the original idea, and I think that goes to show you, especially the Laurier students that are doing it, the kind of students we have,” said Adam Lawrence, Dean of Students at the Brantford campus. Lawrence said he was very disappointed to find out that students have taped Nek Nomination videos in classrooms and residences, but at the same time is happy to see the RAK Nominations that have grown from it.

Lawrence said that he just wants students to succeed until graduation, and to do so in a safe and healthy manner. He admitted that a lot of the Nek Nomination videos could be deemed safe because of their simplicity, but still does not support the idea. Lawrence believes that the risk comes from the notion of trying to outdo each other’s videos, and because of that said, “I just don’t know how safe participating in the Nek Nominations are.” But Lawrence fully supports outdoing each other in the RAK Nominations.