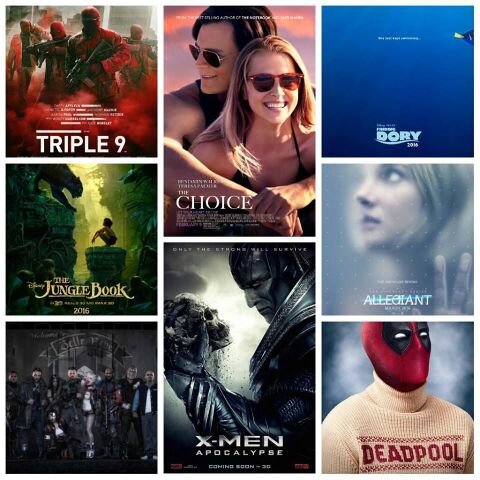 With all of the record setting films, not to mention the billions of dollars in revenue, it’s hard to imagine that 2016 could ever top the impact (and money) that 2015 made on modern film history. That being said, 2016 is gearing up to be a visually spectacular year.

In 2016, superhero movies are coming out in full force, beginning in February and ending in November. DC attempts to kick off the summer movie season two months early, with the highly anticipated Batman v. Superman: Dawn of Justice this March, followed up by Suicide Squad (August), a somewhat risky film for DC to put out so early in their superhero film slate.

As for Marvel, their two studio factions will both be trying to win audiences over. Over at Fox, Deadpoo will premiere in February, after years of development, and their second solo superhero film of 2016, Gambit, comes out in October. In late May, they will release their sixth X-Men team film, X-Men: Apocalypse.

Disney will be having an explosive year in 2016. Disney Marvel’s Captain America: Civil War (May) and Doctor Strange (November) will be the company’s last year with only two superhero film releases, as they gear up for three films a year in 2017.

Other live-action films from Disney in 2016 will include two adaptations of their animated films, The Jungle Book (April) and Alice Through the Looking Glass (May). The first Star Wars spin-off , Rogue One: A Star Wars Story, has a December release.

Animation will also be big for Disney in 2016, with three releases, two of which are in-house Disney films. Zootopia (March) and Moana (November) hope to continue Disney’s successful run after Frozen. Disney Pixar’s Finding Dory will premiere in June, and is looks to be one of Pixar’s most promising sequels.

Other films of 2016 that will be released with high expectations are the Assassin’s Creed adaptation (December), Star Trek Beyond (July), and Fantastic Beasts and Where to Find Them (November), which is the first of three Harry Potter spin-off films.

With all these major film studios pumping out sequels upon reboots upon adaptations upon remakes, it may be hard to find original films. Many indie films won’t begin promotion until later in 2016, but there are some original films releasing early in the year that deserve enthusiasm.

The Revenant, starring Leonardo DiCaprio and Tom Hardy, will be released nationwide  this January. Hail, Caesar! (February) and The Nice Guys (May) combine stellar casts with original ideas to prove critical acclaim doesn’t have to be Oscar bait.

The sheer amount of hype surrounding next year’s blockbusters and independent films should be enough to excite everyone’s inner child, and hopefully calm the nerves of Hollywood’s studio executives.