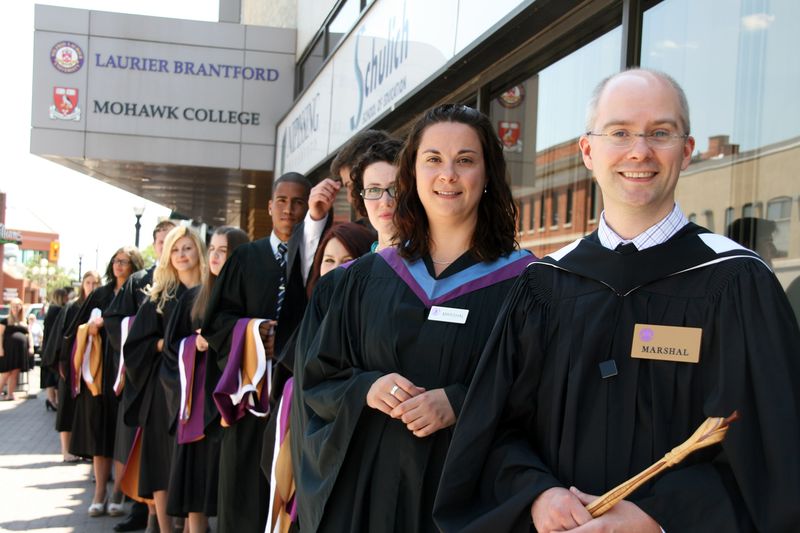 Over the course of three convocations and two very full days, over 500 Laurier Brantford students were awarded degrees from Wilfrid Laurier University Brantford.

From June 18 – 19, Students arrived at RCW to get dress in black robes and pick-up hoods in the traditional Laurier purple and gold.

Students then walked to Odeon where they were lead in a procession around the downtown core by Professor Bruce Gillespie and Laurier officiates to the Sanderson Centre lead by a bagpiper.

Once seated, speeches were made by both President Max Blouw and Chancellor Michael LeChin.

“Today is a day for congratulation and achievements,” said Blouw.

Then, surrounded by friends and family, the students waited patiently to hear their name read by Dr. Kris Gerhardt and take those steps across the stage, shaking the hand of Chancellor LeeChin, to obtain a piece of paper that they had worked years for.

The ceremony was filled with emotions, tears, and hope for the future for all the graduates.

In total, 527 degrees were awarded during convocation by Chancellor Lee-Chin over the two days including absenteeism.

Two of the 527 degrees awarded were honorary degrees given to Eric Walters and Kim Pate.

Eric Walters received an Honorary Doctor of Letters from Wilfrid Laurier University for his contributions to education through his teaching and writings.

Walters, now 56, is a Canadian author perhaps best known for his young adult novels such as Camp X (2002).

Joking about his past teaching efforts, Walters said, “I was a new teacher and they gave me every student no one else wanted.”

Kim Pate, Executive Director at the Canadian Association of Elizabeth Fry Societies (CAEFS), was awarded with an Honorary Doctor of Laws degree for her commitment to the fair legal treatment of all peoples.

Pate is perhaps best known for her political advocacy for battered women and her work with the UN.

After receiving the award, Pate requested that students think about how they are going to open the eyes of the world around them – saying that they are the change.

After the ceremony, students retreated to the courtyard outside of RCW where they were greeted by refreshments, a photo opportunity with their favourite bird mascot as well as 2013 year books and graduation photo composites from WLUSP.

The spotlight was on all the graduates on Tuesday and Wednesday.