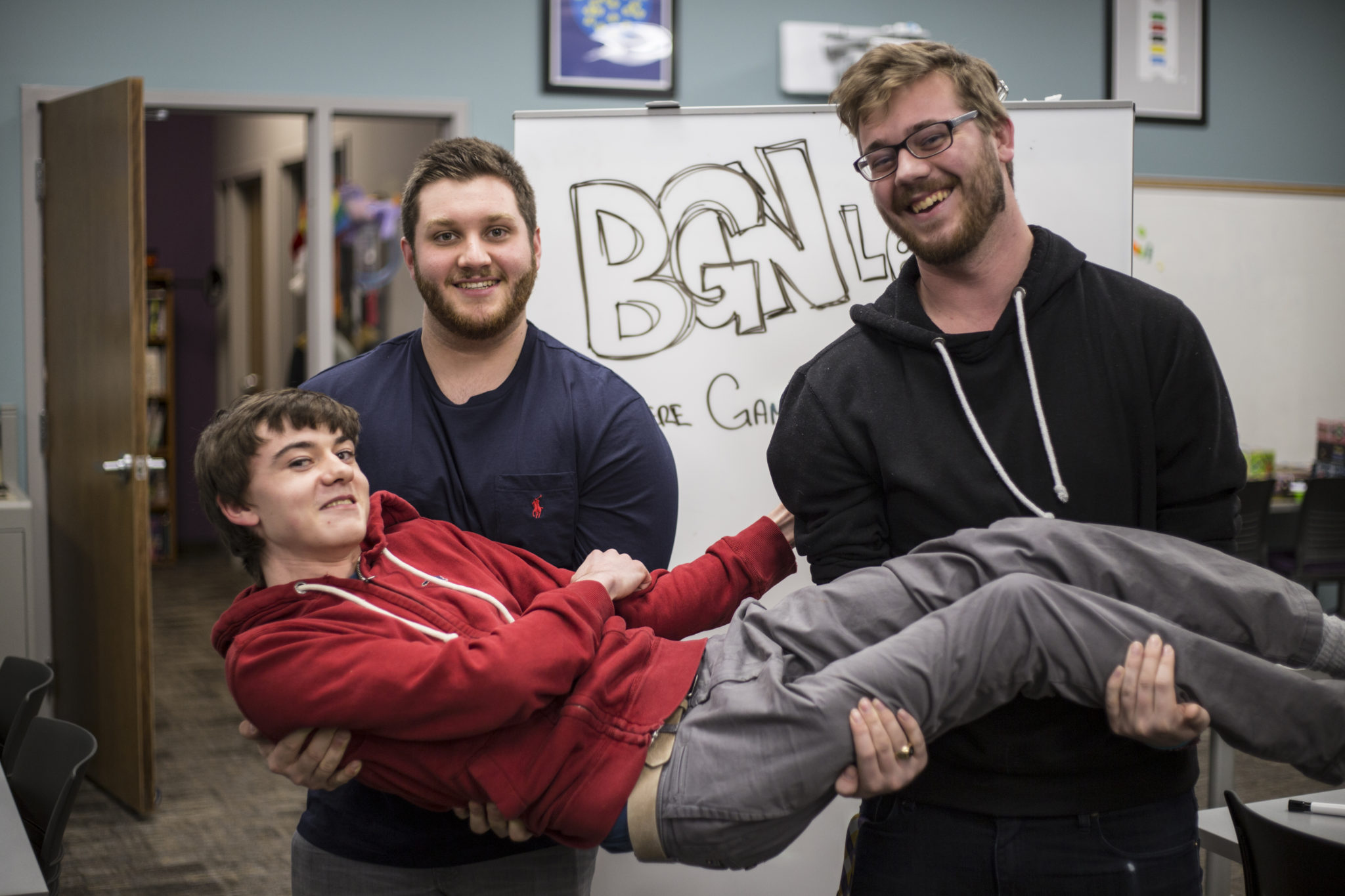 A group of Laurier students designed in the first-ever international escape room competition presented by Red Bull Mind Gamers. The championships will be held on March 25 in Budapest, Hungary.

The escape room, called Mission: Unlock Enoch, was designed by a team of Laurier game design and development undergraduate students under the leadership of Laurier professor Scott Nicholson, a world renowned leader in the field of escape room research and design. The three students — Robert Durant, Sean Harrison and Chris Tenuta — were hired in the summer of 2016 to design the competition in which teams from around the world will compete for the grand prize: a puzzle design workshop at the MIT Game Lab in Massachusetts.

“I couldn’t believe we got a game design position in our first summer of being university students,” said Chris Tenuta, a second year game design and development student.

“It was super exciting to be able to work on a project and do something that’s related to my field of study,” said Sean Harrison, a second year game design student.

The process of designing the escape room used principles and lessons taught by Nicholson in the first year of the game design and development program. Skills like prototyping, playtesting and iterating upon previous designs all helped this team create the escape room competition. The students had the opportunity to apply what they learned in their first year in a real world setting.

“Just actually experiencing it I feel like I got a better understanding of the process,” said Robert Durant, who is also a second year game design student.

Learning all of the terminology and skills in first year made it much easier for the students to prepare themselves for the design process, as well as getting into the details of creating the various puzzles.

“[Nicholson] definitely prepares you for what [you should] expect to see,” said Harrison. “Once you’re familiar with terminology, familiar with different aspect. It’s easier to pick it apart and find what you’re looking for.”

“All the foundations we learned through Scott’s first classes gave us the knowledge of what to expect: research, narrative, start adding puzzles and then go from there,” said Tenuta. “I learned this is definitely the field I want to be in. No matter if it’s analog game design or digital game design I just enjoy game design as a whole and to get a position like this so early in a career is absolutely exceptional. We were all sure we wanted to get into this field but having that first real life experience was just very validating.”

The competition is centered around the theme of quantum computing, inspired by the Red Bull MindGamers film. The premise of the film is that a group of students discover a network connected via a quantum computer that is able to link the mind of one person to another’s body, giving them control.

“Our goal was to create challenges that made sense within the world of quantum computing, combine physical and mental elements, convey a consistent story, reduce dependence on a specific language, and be engaging for viewers,” said Nicholson. “Both participants and viewers of the show will learn something about quantum computing through the challenges we have designed.”

Nicholson will be flying to Budapest to provide commentary during the broadcast.

The finals will air on Red Bull TV on March 25 at 3 p.m. EST and will run for 90 minutes. A viewing party will be held in the Brantford games network lab in room 201 of Grand River Hall for anyone interested in watching with the team behind it.