Fingers fly at the Downtown Showdown 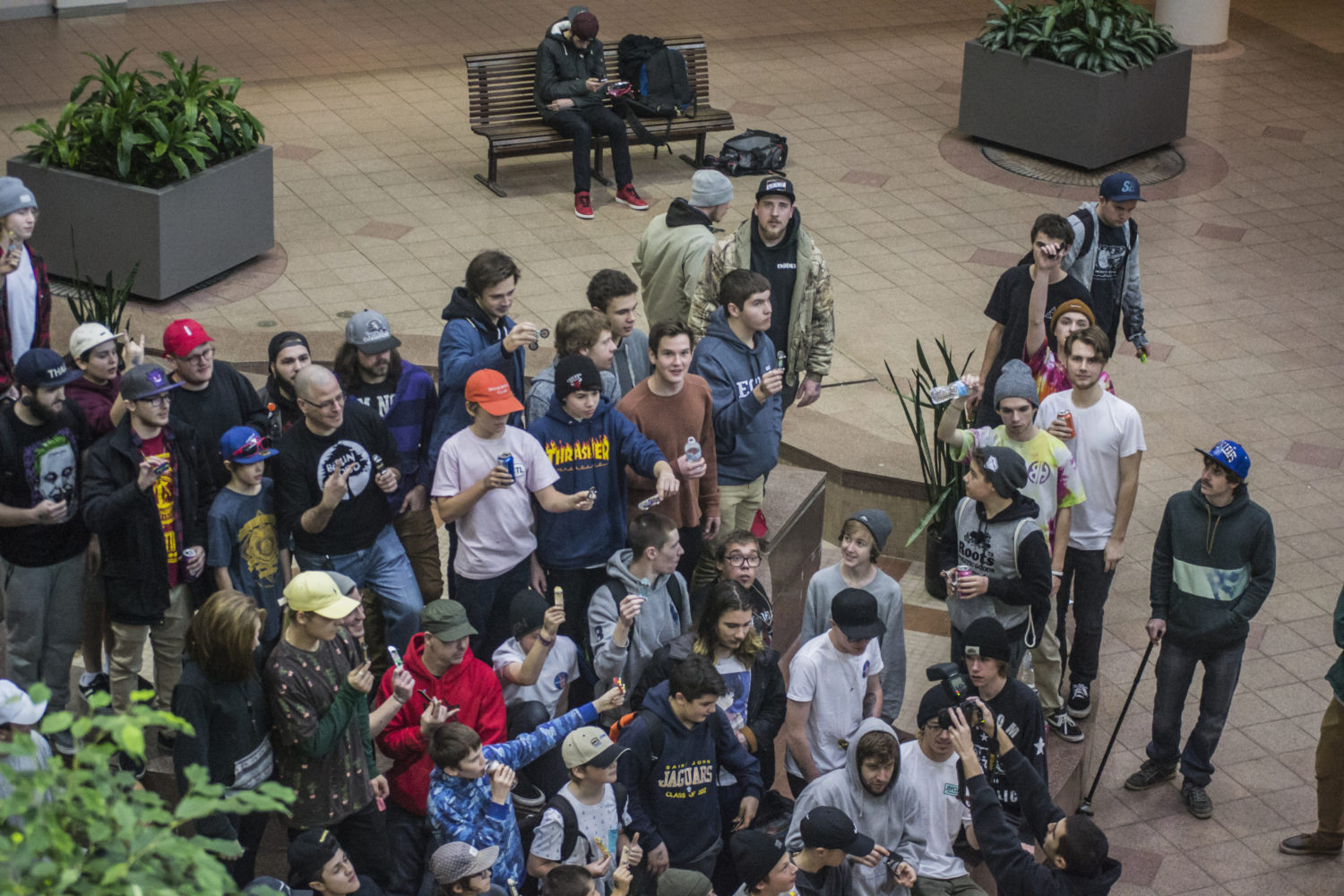 As you enter Market Square, the clinking of plastic wheels echoes throughout the mall. Having joined a group of confused-looking spectators, you peer down the balcony to find over 60* (this number will change) fingerboarders clustered in and around the fountain. They are huddled around miniature skate features, ranging from butter benches to poles jams, with everything in between.

As you walk down the stairs, the scent of pizza is heavy in the air, despite the pile of empty pizza boxes behind the refreshment table. Fingerboards fling, flick and fall as their owners attempt to string along lines of tricks. The flashes and beeps of video cameras gets stronger as you wade through the sea of contestants. After slinking through groups of tie dyed teens, you spot the prize table, filled with various products such as fingerboards and apparel. A particular marble ledge catches your eye as you begin to walk away.

Suddenly, the shrill shrieks of a megaphone siren pierces your ears from above. As you look up, a shower of stickers waft from the balcony towards a crowd of outstretched hands. A handful of attendees wrestle on the ground for the remaining, uncollected stickers. You’ve just been thrown into the middle of the second Downtown Showdown.

The Downtown Showdown, hosted by Joycult Wheels, was a fingerboarding contest made to bring people together and support the subculture. Joycult Wheels owner, Matt Watkinson, was ecstatic about the turnout of the event. “It’s always awesome. Ten people could have showed up and it still would have been cool,” said Watkinson.

Watkinson noted he especially pleased with the number of contestants from outside of Brantford. A handful of attendees travelled from as far as Pittsburgh and Saskatchewan to participate in the event.

“Someone was supposed to come from Germany,” stated Watkinson. “But he got caught up in the U.S. and couldn’t make it.”

Watkinson decided to opt out of the traditional contest format for the second Downtown Showdown, and stated that he feels,“contests are lame.” This led Watkinson hold a race and a raffle instead, as he stated he finds they give contestants a, “fair chance” at taking home a prize. The winners of the race consisted of Cooper Sasso, Dylan MacFarlane and Zach Almeida, in respective order.

Some of the miniature skate features were inspired by skate spots in downtown Brantford; one of the more recognizable being Town Hall. Watkinson made the features himself, along with the help of Derek Doolittle and Andrew Merriam, who helped with the creation of the rails and wood cutting.

Watkinson stated that he enjoys holding the Downtown Showdown contests at Market Square, adding in that he, “wants to have it (at Market Square) every year.” Watkinson went on to mention that he feels, “the contest brings life to the mall”, which is usually inhabited solely by Williams’ employees and customers. Watkinson stated that he feels he was able to use Market Square thanks to his Wilfrid Laurier “connection”. Watkinson formed this relationship with the university through LaunchPad, a Wilfrid Laurier based program which students and community members reach entrepreneurial goals.

Watkinson stated that he plans to continue to diversify Joycult in the future, by selling not only fingerboard wheels, but by also getting into apparel such as t-shirts and sweaters.