Brantford marches for the homeless 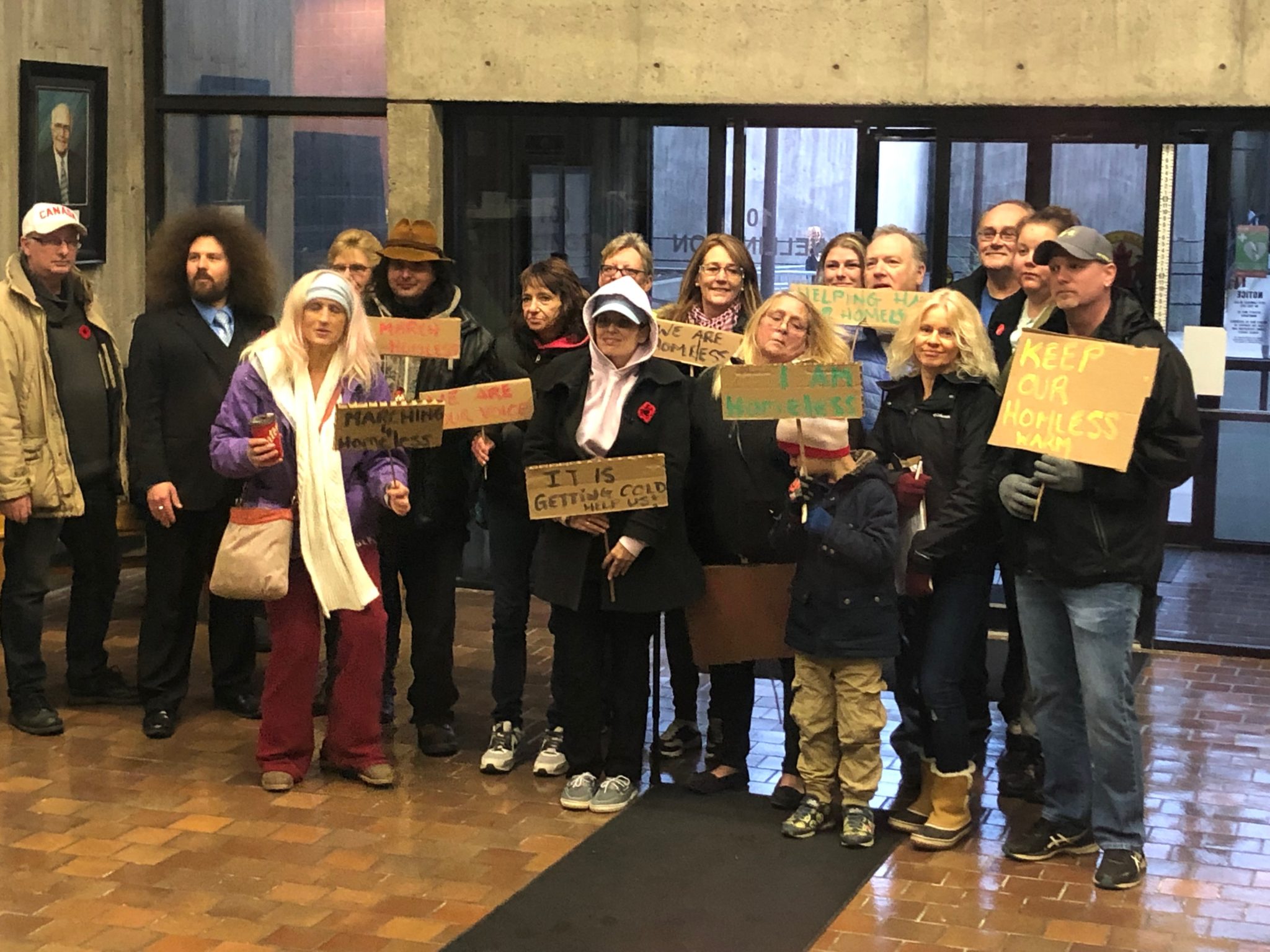 Citizens of Brantford felt the need to advocate on the behalf of this city’s growing homeless population.

Friday, November 9, a small group of brantford citizens gathered outside the Welcome-In Resource Centre with the purpose of walking to city hall to advocate on behalf on the centre being shut down and for the growing homeless population in the city of Brantford.

The event was organized by Deb Steedman, one of the leaders of the Brantford’s Guardian Angels, a volunteer based charity group that seeks to advocate and provide for those in need in the Brant area.

“They’re all being kicked out and now they have to scramble to find a place”, said Steedman, of those without shelter who were utilizing the beds in the Welcome-In Resource Centre, “It’s been a safe space. When they found out they were closing down, the employees were shocked; they were in tears actually. I thought that I should do something about that because it wasn’t really out there that it was being closed down. They keep tight lipped about it. Now I’m hearing it’s the board of directors that’s closing them down.”

Steedman said that she has a “passion to advocate” and felt it necessary to use her voice to speak up for this issue.

The group that was gathered consisted of other members of the Brantford’s Guardian Angels, community members and both municipal and spiritual leaders.

“I heard about the Welcome-In closing and I know that there are not enough resources going around to help these people. The winter is coming and were all concerned about people’s safety, so that’s why I’m marching, to get awareness out there, because we need to get something in place immediately”, said Shawna Bray, member of Brantford’s Guardian Angels.

Dale Renoult, pastor of Rowdon St. Baptist Church described his own encounter with homelessness in the city and his motivation to be marching, “We found a homeless man sleeping under the wheelchair accessible ramp the other day.”

Those that were gathered recognized the importance of places like the Welcome-In Resource Centre, “it was places like this that helped me get back up on my feet”, said Joshua Wall — councillor-elect of Brantford’s fifth ward — when he was describing a time of once being homeless himself.

Tracey Bucci, a member of the Brantford Guardian Angels said, “there’s still stigma and stereotype” surrounding homelessness in the city of Brantford. Bucci addressed that most believe the driving factor to be that of the fentanyl crisis that the city is facing, but adds that unaffordable housing, seniors with little to no pensions, and those in domestic violence situations are all factors.

The Welcome-In Resource Centre is being shut down by its board of directors due to three reasons: 1. It does not run 24 hours — all those who used the emergency shelter overnight, had to be gone by morning. It is not a long-term shelter facility. 2. It did not service women seeking emergency shelter and 3. It did not have sufficient enough security staff.

The issue of homelessness in Brantford has been a long concern for the city; back in the spring of 2018, the organization made a request for $100,000 dollars in additional funding to hire five additional part-time security staff members to service the growing needs of the homeless population.

“We really felt confident that what we wanted to do was going to be well-received,” said Trevor Beecraft, executive director at the Welcome In Resource Centre, to CTV Kitchener at the time.

At the time, councillors voted unanimously against that request, noting that they had turned down other requests for funding from other emergency shelters.

Instead, councillors approved $10,000 in funding to cover the impact of the minimum wage increase, and hired a consultant to review the city’s shelter system and suggest a more formalized funding approach than what is currently in place.

The report that was to review and analyze the city’s shelter system did not come out until september of 2018. During this time, the Welcome-In Resource Centre has stopped servicing women because they were unable to address the safety concern that targeted the female population.

“The city had asked that I increase my female beds from seven to 12 which prompted me to do an internal review of the organization to see if I could manage that capacity. Unfortunately, our request was denied and so we had to take measures to protect our organization as a whole and we unfortunately had to close our female shelter,” Beecraft said to The Sputnik in an earlier interview.

After the Welcome-In centre closed down its female beds, there weren’t many options left for women in Brantford.

What the city had put in place was a referral system that puts women seeking shelter through to social services. From there, they can work with a housing resource worker that will refer them to Nova Vita. Nova Vita is for those who’s housing involves domestic violence and if that wasn’t the case for certain women they would then be directed to Victim Services.

In the case of when someone needs somewhere to stay because they are at the imminent risk of homelessness, Brantford’s media report on the findings of shelter systems stated: “Where no immediate and appropriate options are available, individuals at imminent risk of homelessness would continue to be admitted to a shelter through a coordinated access process. Shelters will focus more strongly on helping individuals transition to a more permanent housing situation as quickly as possible.”

As of right now the Welcome-In homeless centre is set to close its door permanently by December 15. In its place, men’s emergency shelter beds at the Salvation Army Booth Centre on Dalhousie Street will increase to 20 from eight and a 24-hour co-ed emergency shelter with 20 beds will operate 24 hours a day, seven days a week at Rosewood House on Nelson Street.

Beecraft and staff expected to have another 15 months until they were forced to shut down. “It’s the end of a chapter. We know we have saved lives. We can walk out with our heads held high” Beecraft said to the Expositor.