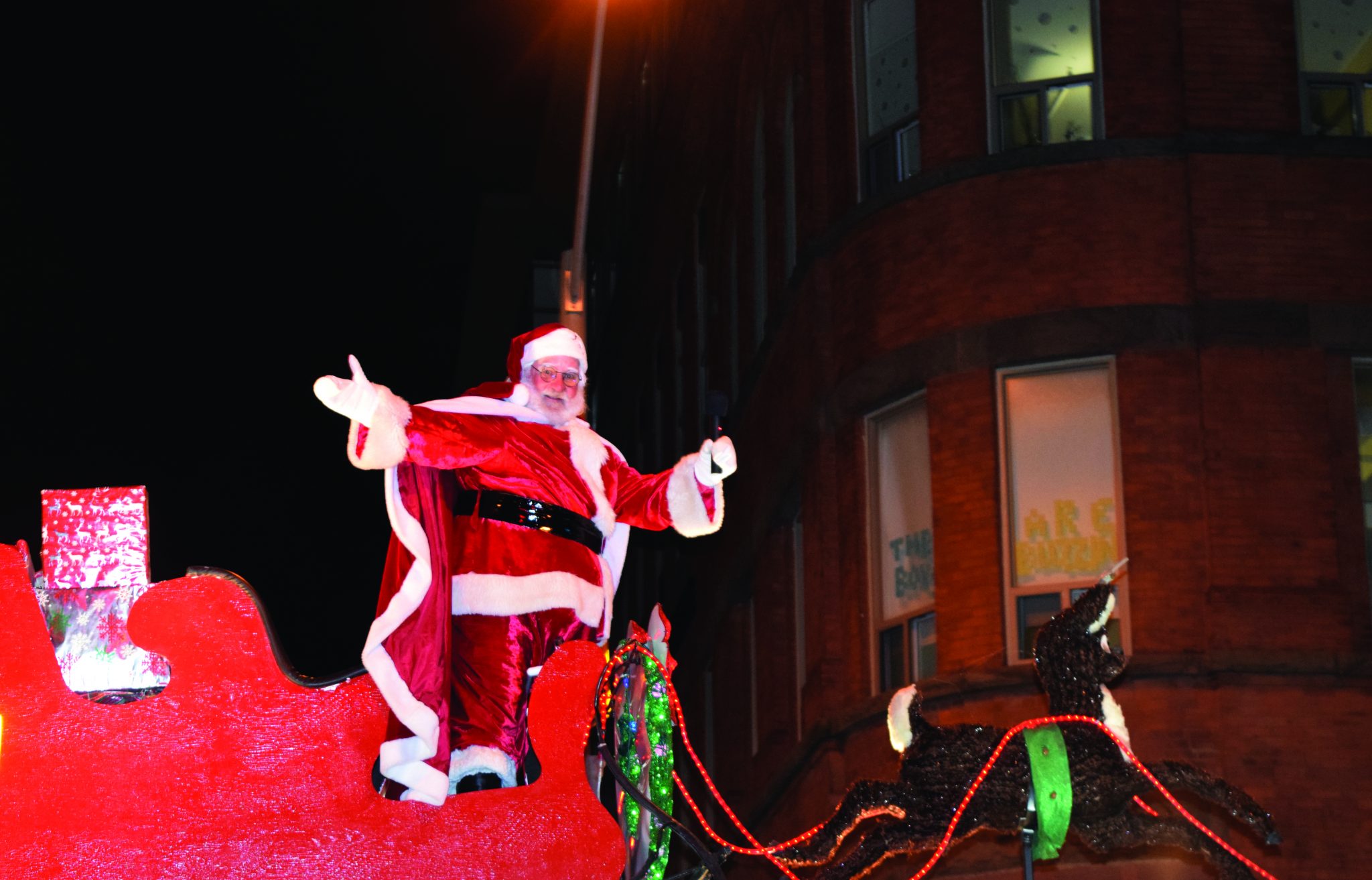 Buckle your sleigh-belts, grab your tools, prepare your carolling voice and get ready to spread your holiday cheer as Brantford celebrates its 45 annual Christmas Parade.

The parade themed Santa’s Workshop, took place on Saturday Nov. 30. The parade began at 6:00 p.m. on the corner of Stanley and Dalhousie St., finishing at Harmony Square.

The Christmas parade is an annual celebration hosted by JCI, a non-for-profit organization. People of all ages come to attend the play, from newborn babies to the elderly, everyone enjoys the Christmas cheer.

About 25 thousand spectators usually watch the parade, but this year the numbers were lower due to cold weather. People clung to their hot beverages and still celebrated the night.

“We’ve got people coming in to set up for the parade and pick their favourite spot,” said a JCI committee member, Michelle Giffin.

The parade was a circus, the streets were packed with spectators, clowns marching in the parade and independent vendors calling the words “popcorn and candy floss for sale.”

Joy and excitement was spreading and laughter filled the air. There were 80 floats in the parade this year, which is the highest number there has ever been for the Brantford JCI parade.

The parade costs around 20-to-25-thousand dollars to run and is a free admission community event. Volunteers go around with money buggies collecting donations from the crowd. The profits from this go back to the parade for the next year’s demonstration.

Some of this money will go towards the bands that play music. There were a total of nine bands this year, some that cost $3500 each. The fundraising helps offset the cost, meaning what comes from the community goes back to the community.

All the city councillors volunteer to be in the parade to push grocery carts collecting food donations which will go to the local food bank.

“You’ll see families that literally have a bag of food ready to drop in the grocery carts as they come by,” Giffin said.

The sea cadets also had a boat tugged by their vehicle to fill with food donations.

The parade is televised by Rogers, and a  live stream is available to watch as the parade is happening, and re-runs are offered throughout the month of December which spreads holiday cheer after the event has finished.

There is also a contest happening throughout the duration of the parade. Those  involved with the parade are competing for most enthusiasm and spirit, such as costumes, decorations and engagement with the crowd.

“If they’re generating good, you can feel it, you feel the spirit,” said first time judge of the parade, Stephen Wdowczyk.

Some of the categories that are judged are best overall, most enthusiastic, best school, most original and best non-profit or church organization.

Magic was in the air throughout the whole parade, which had many great floats and decorations, but the star of the parade was Santa. The crowd was buzzing during the parade, but roared when Santa came.

“Watching the kids when Santa comes by, that build-up as they see him for the first time; it never changes, and it’s the most beautiful, most pure excitement,” said Giffen.

While Santa was the star for most, Laurier students hold the school close to their hearts and loved the schools contribution. The Laurier crew showed their pride and waved banners and sported spirit wear, the yellow and purple danced in the sea of students.

Pom-Poms and yellow hats decorated most students and cheer was never lacking. The Golden Hawk mascot was theatrically engaging with the crowd, waving and blowing kisses to spectators, spreading some Golden Hawk love. Even exam season can’t stop the festivities as students were seen watching the parade from their dorm windows.

One setback the parade committee faced was the wrong street being marked where all the people preparing their floats were supposed to get ready for the parade. There were also no, no parking signs on the road that was to be used. Everyone sprang to action and fixed the issue to make sure the parade was ready on time.

The parade brought a sense of closeness and fellowship.

After the parade there was a local party held by Brantford Parks and Recreation at Harmony Square where pictures could be taken with Santa and festive music and food was enjoyed, as well as watching the lighting of the City’s Christmas tree.

The square was packed with people celebrating. The feedback from the crowd was very positive and many said they will be returning next year to join in the festivities again.