Battling the odds with health food 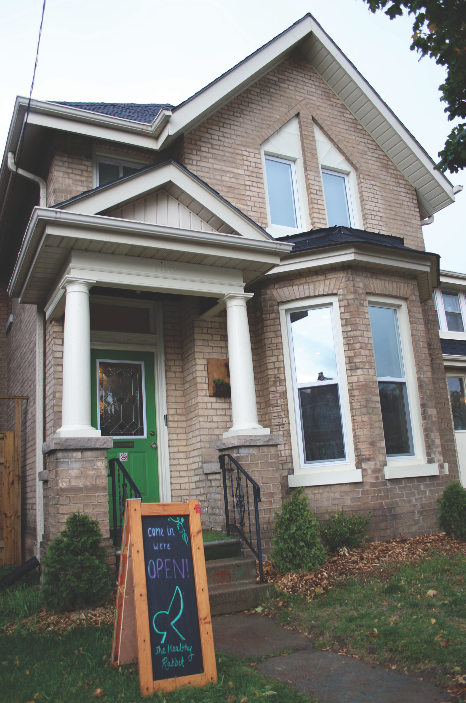 Popular chatter on the street in regards to restaurants are whispering the scary idea that nine out of ten first-time restaurants will fail within their first year. Brantford local, Justin Hensen is ready to take this nerve-wracking rumour head on, bringing this confidence to the oldest street in Brantford.

The Healthy Rabbit has taken over the seemingly typical house residing at 105 Brant Ave. This health-inspired café and eatery opened in early October after five months of renovations, reconstructions, hand-made decorations, and antique furnishing.

Hensen wanted his café close to Laurier Brantford, but not quite in the core downtown. “I didn’t want like a square box that you get when you rent a place down there, whereas here there’s so much character.” Hensen is thrilled to kick start building Brant Ave into a go-to street of unique shops and restaurants.

“I’m just really excited about Brantford in general … There’s a lot of heritage here, I think more than any other city in Canada that I can think of,” Hensen says, although he does admit his lack of research in other cities.

Three distinct rooms flow throughout the old bricked building. The first of which displays a pew bench across one wall, five aged black tables and rustic chairs for more seating. Three large pictures display a rabbit from Hensen’s sister’s farm giving fearless facial expressions. A doorway leads to the next room that holds a bar with comfy stool seating and a basket of board games to keep things casual and fun. Attached is a smaller room with a couple more aged tables, seating, and crates turned into shelving packed full of vintage-looking books. Customers can kick back and read on cooking, health food, sports, music, self-help, nutrition – just about anything related to living a healthy lifestyle.

“I went into it with the thought, ‘I’m not making this for money’ I’m just into this because I want to provide something for the city,” explains Hensen. Although Hensen says his family is always supportive of everything he does, they certainly voiced their opinion that he should open anything else other than a restaurant. Yet, Hensen has high hopes for the future of the Healthy Rabbit.

“It’s something that inspires me, and every time I step into the kitchen I can try something new or I can just sit in this atmosphere and soak up a little bit of energy.”

Over 30 volunteers from all around the world came to help out in the construction of his café over the summer, each putting their individual touch on whatever project Hensen assigned to them. Glass jars holding succulents and crafty substitutes decorate the rooms as table toppers. Each one has a wooden tag with a number – seemingly random, but are actually the favourite number of each volunteer that helped in creating that specific table topper.

“I just think that a lot of these things bring memories to people, and hopefully it makes them feel really comfortable,” explains Hensen. This laid-back aura was inspired from Hensen’s travels around the world over the past five or six years visiting many cafés and restaurants. Traveling to quite a few other countries for just a few months, life also brought Hensen to working in the food industry in Holland, Austrailia, and Korea full-time. Although it may not have been his intention, cooking became a consistent career and soon a loved hobby.

The interest in health came from Hensen’s time as an athlete before his travels, running in many triathlons Hensen found raw organic foods were really being pushed as a big thing back then. Even the whole chemistry side of nutrition caught Hensen’s attention, and he wants to share this love with the world.

“I’ve just learnt so much about eating healthy and how much it benefits you. It’s pretty cool to be able to share that experience with your family and see if maybe they can live longer, have more enjoyable lives you know?”

The Healthy Rabbit menu is designed for people that have dietary issues or concerns. A legend at the bottom gives symbols for each plate to show whether they are vegetarian, vegan, dairy-free and more. On top of attending to specific diets, Hensen is very keen on quality. “A lot of the restaurants that I’ve seen and worked at that are really good, they’re really good at one thing, you know? Like they’re not good at a thousand things. So, that’s what I want. I want to be really good at everything,” he says with a smile. A lot of Hensen’s ingredients come from local farms, and he plans to convert his sister’s local farm into a source for all his organic products next year.

The future progress of the Healthy Rabbit is highly reliant on volunteer work. Most of October was just Hensen and his friend from Korea, Younga Shin working every day from 9 a.m. until 10 p.m., and 2 p.m. until 7 p.m. on Sundays. Hensen currently has some students and Brantford locals now putting in volunteer time, but always welcomes anyone interested in getting involved to reach out and join the team. “Volunteers are necessary to keep the prices reasonable and make us successful,” explains Hensen.

To make things more convenient for Hensen’s customers there is an online option to pre-order your food so that it is ready by the time you get there. Hensen stresses the ability to take advantage of this especially during lunch time as it can get quite busy with all the high students and businesses nearby.

A fun new initiative to get Brant Ave turning into a biker friendly street is going to make juicing even more convenient. Instead of pre-ordering a Healthy Rabbit juice online for pick up, Hensen wants to incorporate a juice delivery system. Hensen is currently looking for anybody with a creative mind interested in making abstract bike racks to hold the bikes of the soon-be be delivery persons for their juices. Hensen is hoping to have this delivery system up and running by the end of the month.

On top of the five star reviewed food and beverages, the Healthy Rabbit also sells an assortment of health and environmentally-friendly products both online and in store. All of which can be found at healthyrabbit.ca.

Hensen is currently working up a student deal to be announced soon, stay tuned on the Healthy Rabbit Facebook page to check it out!