“An initiative that aligns well with our name and reputation”: A lens on Laurier’s statue project 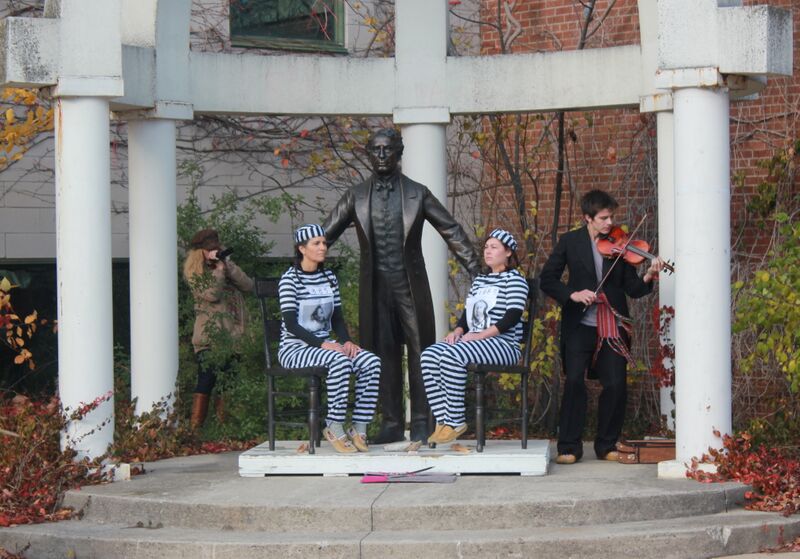 By the 150th anniversary of Confederation, Laurier’s Waterloo campus may become home to as many as 22 monuments created in the likeness of Canada’s former prime ministers through an initiative called the Statue Project.

The monuments were originally meant to stand in Kitchener’s Victoria Park, but the project was shut down in 2013 due to public protest.

In June 2015, Max Blouw, President and Vice-Chancellor; Rob Donelson, VP, Development and Alumni Relations; and Joel Peters, AVP External Relations; received approval to welcome the statue project to Laurier’s Waterloo campus by the Board of Governors.

The cited rationale for the proposal, according to the Board of Governor’s agenda archives was, “As the only Canadian university named after a prime minister, this is an initiative that aligns well with our name and reputation. There is an opportunity to involve the Laurier community in the creation of educational programming that engages the public and the university community in the history of the prime ministers and their importance to Canada and their times.”

The first statue, a life-sized representation of Sir John A. MacDonald, was installed in the Quad on the Waterloo campus this past June.

Jennie Rideout is a Laurier Brantford alumna who is part of a group that has been working to challenge the statue project since first hearing about its ties to Laurier this June.

“We immediately realized we didn’t like it and wanted to do something about it,” Rideout explained. To Rideout, the statue project “stomps” on Laurier’s efforts to be recognized as a campus working to support diversity.

Rideout explained that advocates working to oppose the project believe that it is culturally insensitive to occupy university space with the likelihoods of figures who spent their terms in office “advocating for [the] destruction,” of marginalized groups.

“The statue project was designed and accepted without any consultation of indigenous peoples or historians at our school, and it shows,” says Jaydene Lavallie, a student at Laurier’s Waterloo campus working on the student resistance campaign.

“It’s not only an ineffective way to teach history … but it completely ignores and erases the contributions of the immigrants and people of color who built this country, the victories of women who fought for equality, and the struggle of indigenous people to maintain their sovereignty and dignity in the face of oppression,” said Lavallie. “Instead, these people are being offered a side-note in the history of prime ministers, some of whom were in office for less than three months.”

Rideout explained that it is particularly important for Brantford students to be informed about the statue project, because a number of financial cuts were made to the campus last year that resulted in staffing cuts for support services and cuts to programs.

Rideout urges Laurier Brantford students to contemplate Laurier’s financial responsibility, stating that funding the installation and maintenance of the statues is “not aligned with what [Laurier] says they stand for.”

“I want Brantford students to know that this is their struggle too, and their voices matter,” Lavallie explained. “Not only will they share in the reputation these statues will bring to our university, but they might also share the possible $88,000 cost of their installation.”

At the Senate Meeting on Oct. 20, the project was voted against by about 75 per cent, opening the door for the project to be reconsidered. Student, faculty and alumni advocates who oppose the project are working to submit documentation in opposition for the Nov. 12 senate meeting.

According to Joel Peters, Laurier’s AVP of External Relations, Laurier is still working to determine the specifics when it comes to the cost the university will incur as a result of the statue project. Laurier will be financially responsible for the installation and maintenance of the statues if the project proceeds.

“On a per-statue basis, the working estimate is in the two-thousand to four-thousand dollar range. We have also determined that there are instances where installation might piggyback on other redevelopment projects, such as the plan for the King Street corridor. In these cases, the costs will be lower and likely small increments to the overall project as the street landscape is improved,” Peters explained. “Finally, an individual has approached Dr. Blouw on an anonymous basis and will contribute $20,000 towards defraying the university’s costs.”

“As was observed at the Senate meeting, costs are not a significant issue for the project. The community partners who are backing the project are fundraising for the overall cost of the statues and there is no capital cost to the university.”

“We wanted to do something as a group that was significant for the country and for the region in regard to the anniversary in 2017,” said Jim Rodger private sponsor and co-ordinator of the statue project.

“We see the sculptures as the objects that are going to begin those discussions. You need something to get things started, and if it’s the image of that prime minister, then so be it,” said Rodger. 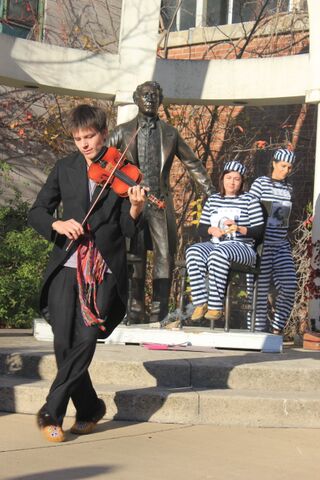 Rodger explained that 150 students at Nipissing’s Brantford Schulich School are working to develop kindergarten through to grade 10 curriculums surrounding the prime ministers’ statues.

“A local principal in Waterloo Region reported that on the day after the election, a child in grade one, upon hearing on the school PA system that Canada now had a new prime minister, stopped the principal in the hallway and asked her, ‘Exactly what is a prime minister?’” explained Maria Cantalini-Williams, an associate professor at the Schulich School working with concurrent education students to design curriculum for the statue project.

“Concurrent education students are developing draft educational resources to address curriculum expectations as related to Canada’s prime ministers and the concepts of citizenship, democracy and leadership. This assignment coincided with the recent federal election and the educational resources will be shared with the Prime Minister Project Committee. The resources, after validation by a wide range of reviewers, are intended to be available online to support awareness and discussion of Canada’s history in alignment with 2017 Canada sesquicentennial activities and are not dependent upon visiting the statues,” explained Cantalini-Williams.

“Students have indicated that the planning process has been an authentic learning opportunity enhancing their pedagogical skills and civic engagement. In past years, Nipissing University students have also developed similar education resources for Free the Children, Me to We and the David Suzuki Foundation.”

Rodger sees the prime minsters as “bookmarks” in the chapters of Canada’s history, and hopes that the project will introduce the public to each prime minister and the era in which they lived.

The statute project committee also hope to create content for the general public, “this is material that at the moment that will be available online and open source for anyone that wants to access it,” Rodger explained.

The site will be a similar open source platform, like Wikipedia, so that anyone can edit the content. “If someone were to offer the counterpoint to something that’s there or if they want to expose something about a prime minister in a positive or a negative way, that we haven’t been able to touch on, then they have to opportunity to put that material up on this site just as anyone else would,” said Rodger.

Rodger explained that he sees the project as a space for discussion. “If there are things that people need to know about the Métis, and that you feel very strongly about, in relation to Sir John A. MacDonald, or Laurier, or whoever, what are those things that we need to know? Let’s develop those things so that they can be part of the story. We’re not looking to whitewash, we want to tell the true story. We want to tell the real story. But we think the story’s more than just the negative things. You can’t have a country with the status and the depth we have today based on just negative things. And we can’t move forward if we only look at the negative things. We need to build on strengths and we need to correct weaknesses.”

“We’re not trying to celebrate dead white guys,” said Rodger. “But, what we want to do is use the leaders of our country to bring people deeper into the depths of the true history of Canada.”