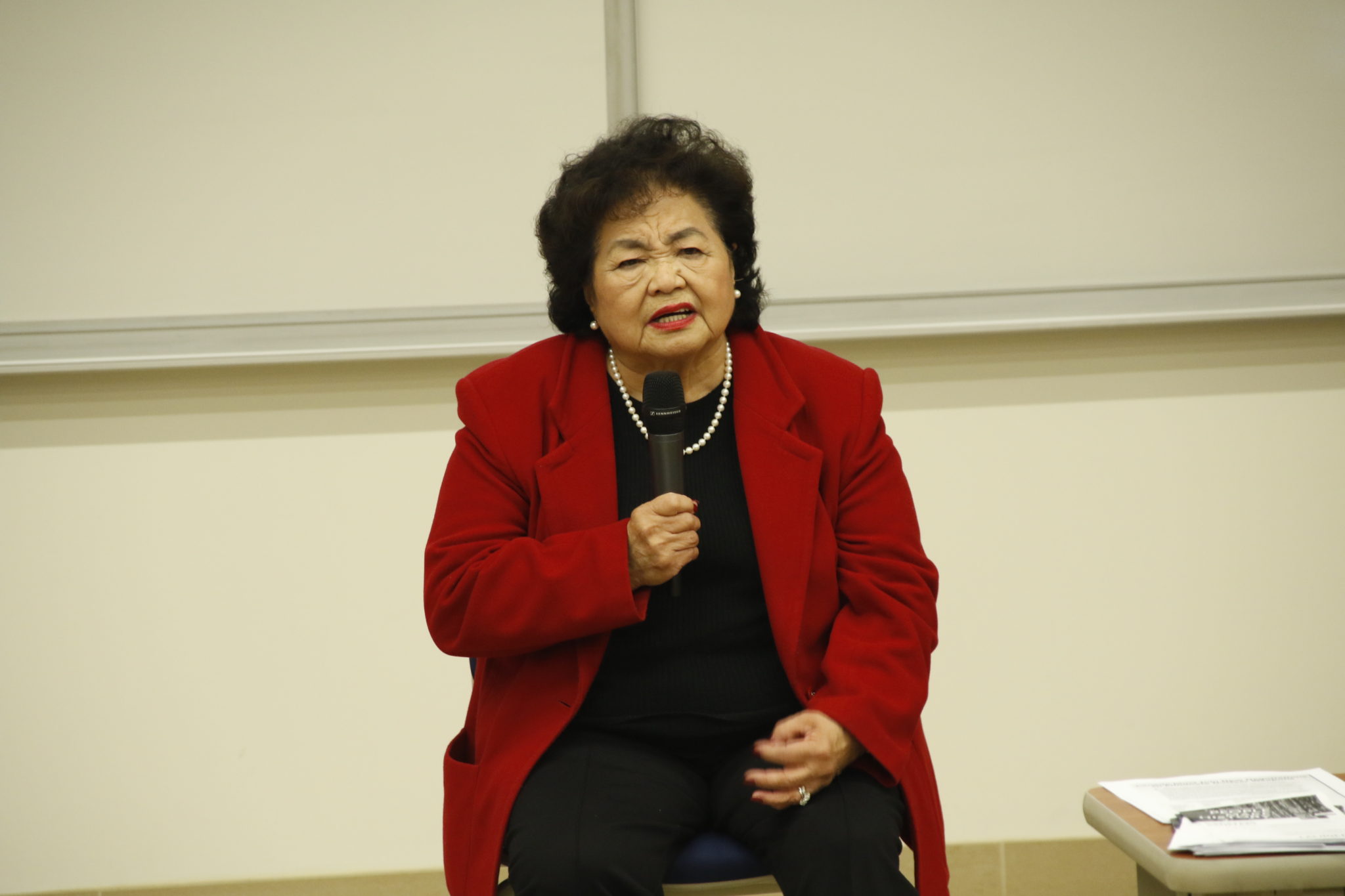 As part of the People Make History lecture series, Hiroshima survivor and anti-nuclear weapons peace activist, Setsuko Thurlow visited Laurier this past week on Feb. 28 and March 1. Thurlow shared her experiences on growing up in Japan during the Second World War and surviving the atomic explosion over Hiroshima.

When she was thirteen years old, Thurlow was one of thirty girls selected to work at the army headquarters in Hiroshima, Japan, decoding secret messages during the second world war. On August 6, 1945, after three weeks of training, these girls were preparing to start their first day of work when at 8:15 a.m., Thurlow saw a bluish-white flash outside the window.  She remembers flying through the air as if she were floating, and then total blackness.

When she regained consciousness, she found that the building she was in had collapsed and she was pinned beneath the debris. She could hear her classmates whispering, “God help me, mother help me,” and these voices still ring in her ears today.  She felt someone shake her shoulder and a voice saying, “Don’t give up! I’m trying to free you! Keep moving! See the light coming through the opening? Crawl toward it and try to get out.” By the time she escaped from the ruined building, it was on fire and most of her classmates could not get out.  Only three of them escaped.

Thurlow had to brace herself to conjure up memories of the event.

“It was a procession of ghosts, they did not look like human beings. They were naked, tattered, burned, and swollen. And the worst thing I saw was people carrying their own eyeballs in their hand.”

Thurlow and her two classmates joined the procession, learning to step over the dead bodies.

At the foot of a hill, there was an army training ground covered with dead bodies and seriously injured people; all they could do was whisper for water. Thurlow and her classmates wanted to do something to help. There was a stream near the training ground and since they didn’t have buckets or containers, they tore their blouses and soaked them in water, offering them to injured people to suck out the moisture.  Most health care professionals had died in the explosion and the government was in disarray. There was no food or medical supplies.

Thurlow’s sister and nephew were burned beyond recognition. The only feature identifying them was the hairpin her sister had been wearing. Thurlow does not remember crying. She just felt numb.

Many people who survived the initial bombing would die shortly afterwards  from the radiation. People began to fear those who had been exposed to the radiation, believing they had an infectious disease. Symptoms are still evident in some survivors today.

Three days after the bombing of Hiroshima, America dropped a second bomb on the Japanese city of Nagasaki. Japan declared surrender six days afterwards. The U.S. Occupation authorities wanted the rest of the world to know that America had defeated Japan, but they did not want them to know the amount of suffering the people of Hiroshima and Nagasaki had endured. They confiscated anything that could make America look bad, including photographs, videos, and diaries.

Thurlow later came to Canada where she was a social worker in Toronto for several decades. She feels an obligation to share her story of Hiroshima.

“When people work hard, we can make the difference. We can change. We must be positive and keep doing, what as citizens, we are responsible for,” she said during her lecture.

Thurlow is advocating for a better world for future generations to grow up in – one that is peaceful and just.