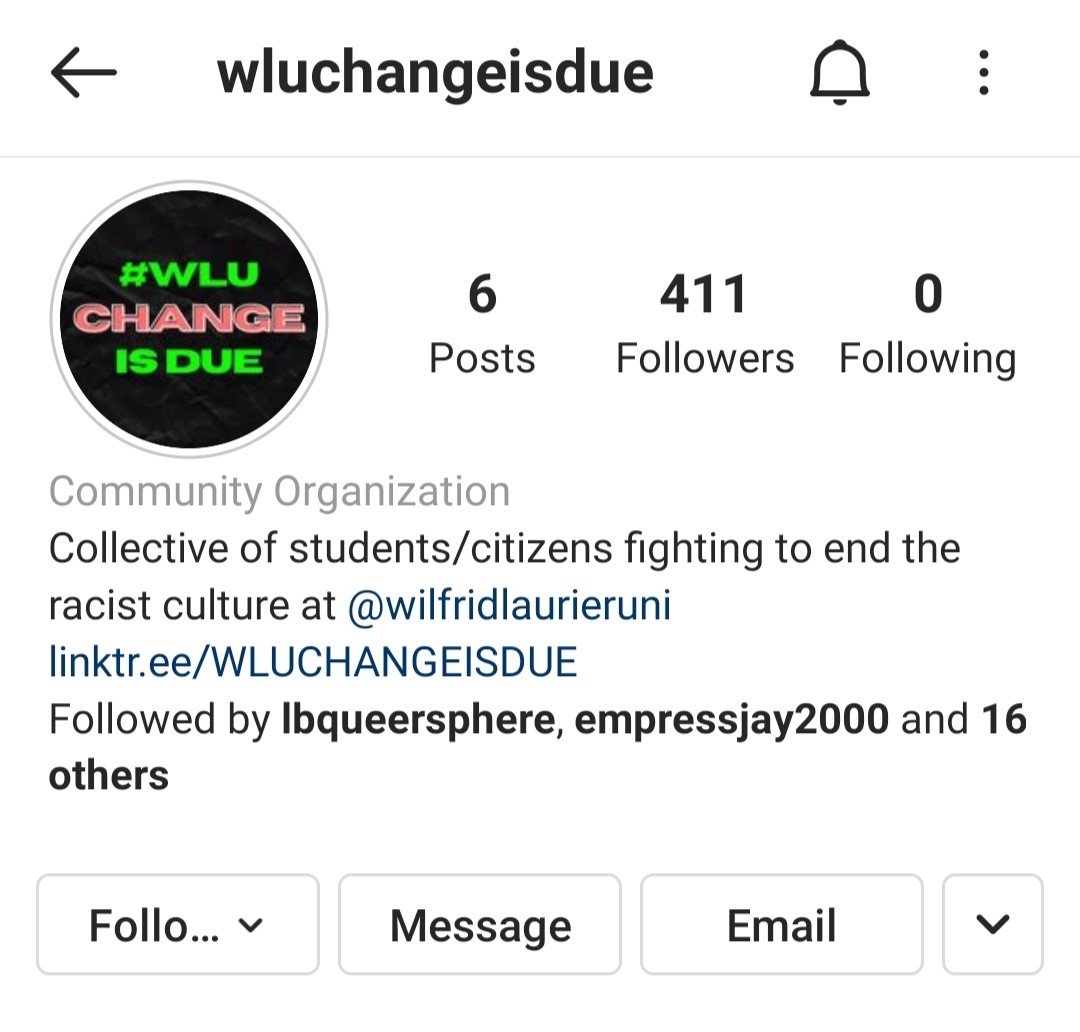 Group for equity WLUchangeisdue challenges Wilfrid Laurier University in a battle against racism.

Students, staff, faculty and citizens of the Kitchener-Waterloo area of multiple different backgrounds band together to fight Laurier University and their neglect to acknowledge the presence of racism on campus. The Sputnik was able to confirm at least one leading member is from Laurier.

As an anonymous collective group running since the summer of 2020, WLUchangeisdue said Laurier not only condones racist practices, but embraces them.

The team has big plans to shine a light on the racist behaviour of staff, students and administration of the university, and plan to make their advances for justice required action from the school.

“[We] have continued to work behind the scenes on various initiatives, actions, call-outs, and movements while continuing to collect information that can be presented in a final package to various bodies that can resolve the issue on campus,” said WLUchangeisdue in an email. “We have no faith in the WLU administration, if we have to take this higher up, we will. The school should be extremely worried.” 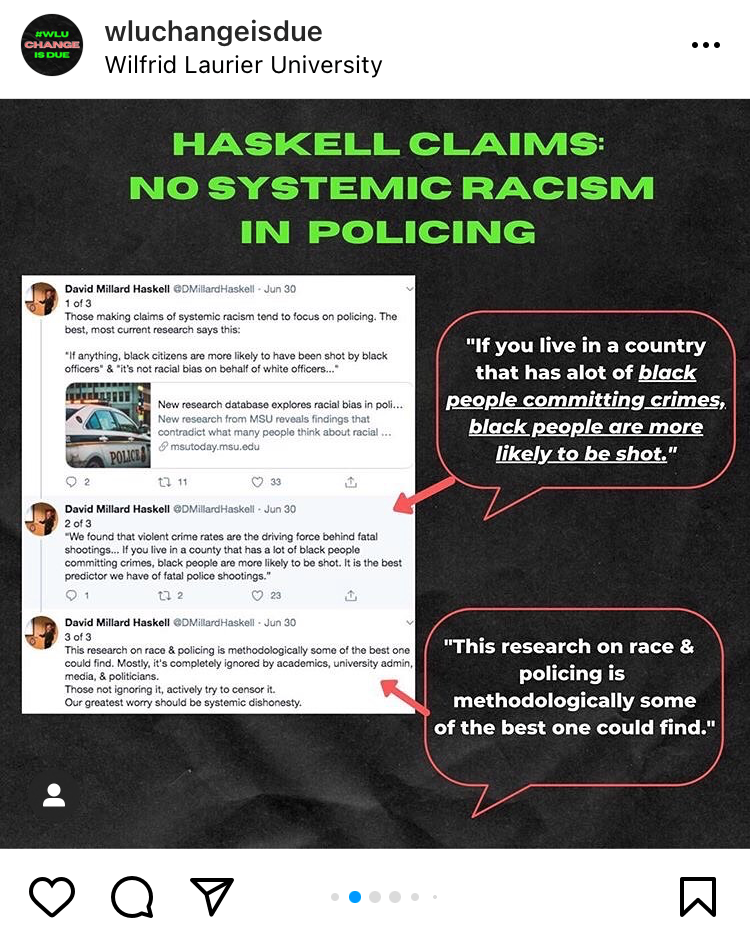 While the group states certain professors showing racism in class and on social media platforms is a main concern, another concern is the lack of attention the school seems to give these issues.

“There is a difference between personal opinions that are expressed on public forums, such as social media, and those that are expressed in the classroom or in student-advisor interactions …” said Graham Mitchell, Director of Communications and Issues Management, in an email to The Sputnik.

“Wilfrid Laurier University is deeply committed to equity, diversity, and inclusion. We are also committed to free expression. There is often tension between these values,” he said.

Mitchell, speaking on behalf of Wilfrid Laurier University wants it to be acknowledged that the opinions of individual members of the Laurier community do not necessarily reflect the views and values of the university.

WLUchangeisdue said these issues are noticed by administration of the school, but are not sought to be fixed. 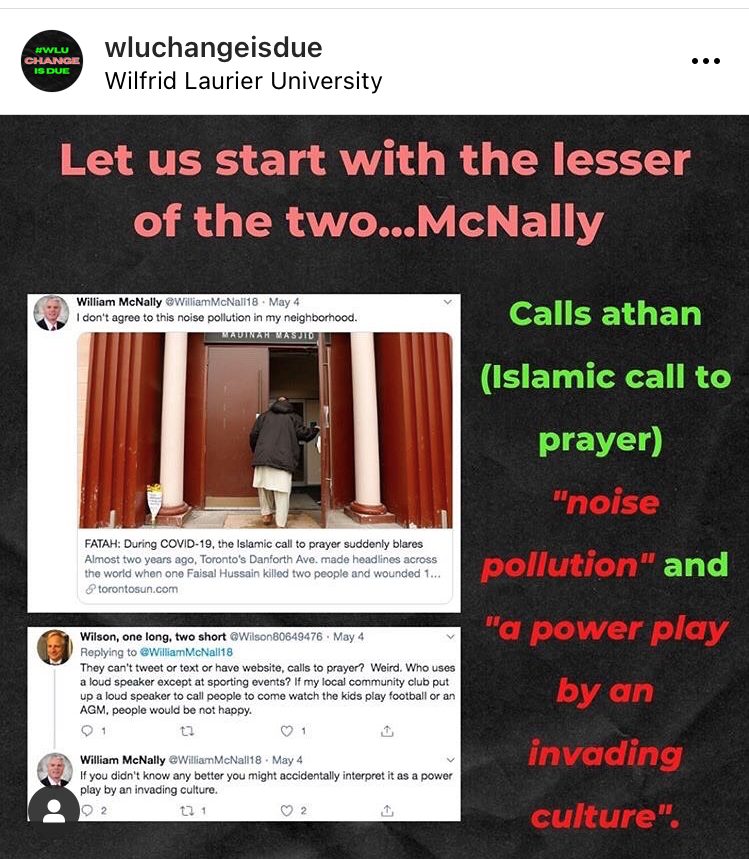 As confirmed by Mitchell, the university is aware of the group’s presence, and supports the rights students have to express their views. Staff and administration are welcoming and willing to talk to students about their concerns and respect the account holders desire for anonymity.

“We don’t want to hear that students are being faced with racism on campus by faculty and staff. We don’t want to hear how students’ concerns have been swept under the rug, dismissed, or ignored because it would be a bad PR look for the school,” said WLUchangeisdue. “We could not be ignored, even though they tried, and their silence spoke louder than if they actually acknowledged us.”

Wilfrid Laurier University is currently working on implementing an Action Plan for Indigeneity, Equity, Diversity and Inclusion, which will include a review of the Special Constable Service and their interactions with Black, Indigenous, and racialized members of Laurier.

WLUchangeisdue wants their voices to be heard. One goal is to remove the Special Constable Service from campus. The funds that support this service would thereby go toward services that benefit BIPOC students instead.

WLUchangeisdue has started to collect stories from students about racist and hateful interactions and policies between the students of Laurier and the Special Constable Service.

Once these stories are compiled, the team will be releasing them on their Instagram page.

“It is our belief that if students have complaints that need to be raised, we would rather deal with them directly rather than an anonymous social media account. Because of the anonymous nature of the account there is no way for us to be sure if; A) Laurier students are even running the account or B) if stories being shared are from Laurier students. We have never been directly contacted by the group so we have no relation to them at this point,” writes Kelly.

The WLUchangeisdue team wants a positive change on both the Waterloo and Brantford campus, as issues have occurred within both. The team consists of members fighting for advocacy, as well as members who have been victims of racism on campus themselves.

WLUchangeisdue also wants President and Vice-Chancellor Deborah MacLatchy as well as Pegah Jamalof, new President and CEO of the student union to be removed from their positions. The group feels both people have disregarded the positions they are in and have ignored pressing issues facing Laurier students, especially to the professors still teaching at the school.

When specifically asked about this comment Mitchell gave the same answers as before. Jamalof didn’t respond to The Sputnik’s request.

The group has no desire to give up. They are dedicated to fighting for the justice and equality of the student body. WLUchangeisdue also states silence is compliance, and is waiting for Laurier University to speak up on the issues of racism on campus.

“We think they’re [students and professors] scared. And they should be. Because this isn’t going away when the semester ends. This is going to continue. We have made sure that it will. We won’t stop until the school does something real,” said WLUchangeisdue.

WLUchangeisdue also said the Student Union has not reached out to aid the group or take note of their concerns for change, leaving them with no faith in the leaders of their school.

“If students have experienced racism, hate, or oppression within Laurier classrooms or in direct interactions with any member of the university community, including instructors or staff, the university takes these issues very seriously,” said Mitchell.

Mitchell further explains Laurier has systems implemented where students can report complaints under the Harassment and Discrimination Policy 6.1, through the Office of Dispute Resolution & Sexual Violence Support.

“There are also supports available to students through the Centre for Student Equity, Diversity, and Inclusion (CSEDI). Staff at CSEDI can support with advocacy and navigating internal systems to file complaints related to discrimination and harassment. CSEDI can also provide information on community support for students who have experienced speech that is hurtful and/or discriminatory,” said Mitchell.

WLUchangeisdue, a group unique to Laurier is inclusive to whoever may want to join, as an allying member or as a person who has experienced the effects of neglect and racism from the school.

“Join us, share your stories with us, we are always here for the BIPOC students of WLU, even when the school isn’t. We want our voices to be heard, and we want our stories to be shared. We can’t let them get away with this any longer,” said WLUchangeisdue.