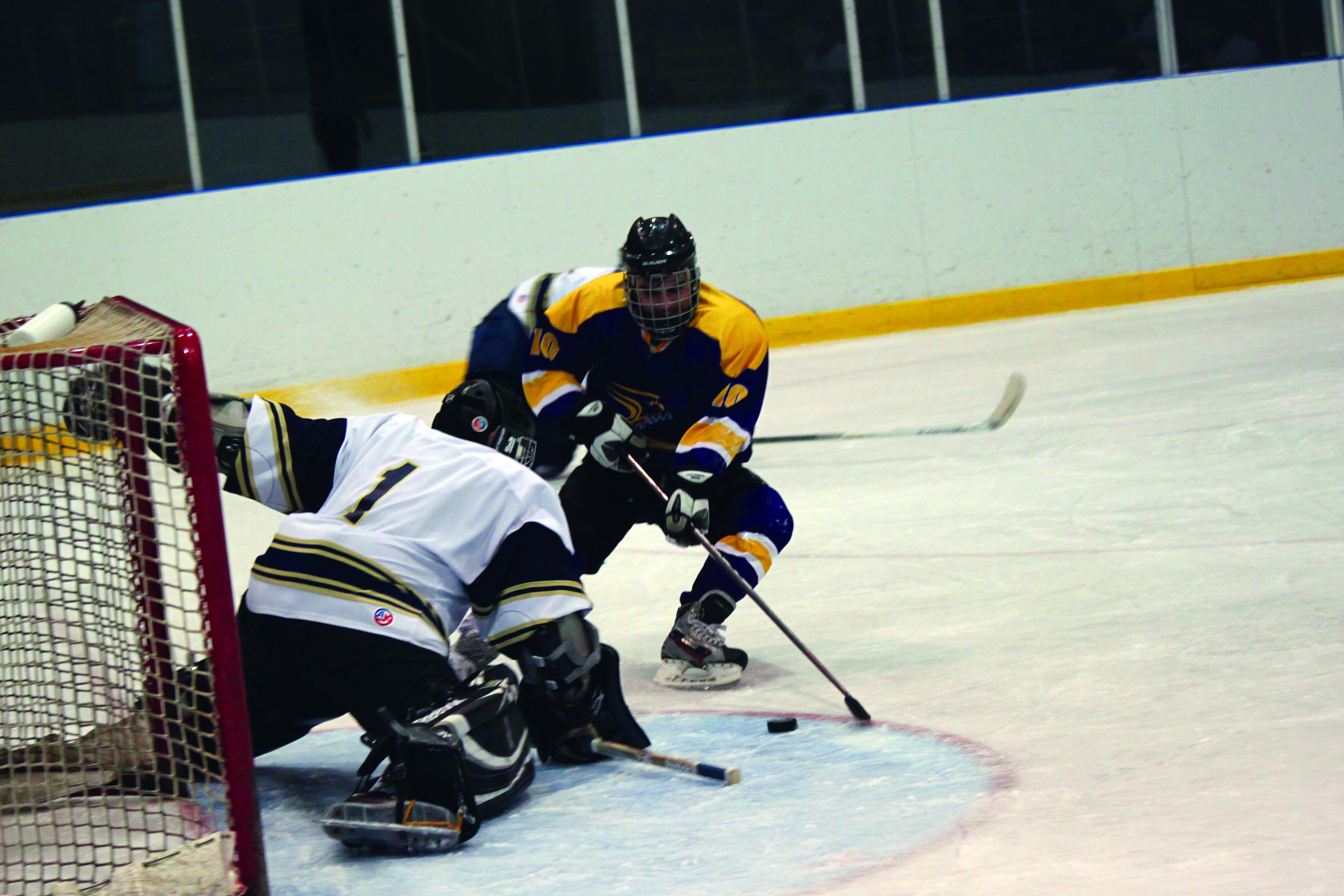 The Wilfrid Laurier men’s hockey team hosted a tournament on Friday, February 14, and they had one goal in mind after their last disappointing tournament: to win.  The start of the tournament didn’t go according to plan; Laurier allowed the first shot of the tournament to go in. Laurier had a chance to respond but Brian Holland hit the post while Mohawk’s goalie was scrambling. Holland continued to apply pressure after his chance and Laurier was able to turn it into a goal. Laurier added another one right after as well. Mohawk was able to tie the game in a fast-paced first period.

Laurier then added a third goal thanks to a shot from the slot and they lead 3-2 midway through the second. After a giveaway in front of the net, Ben Brenner was able to save his team. But Brenner saved his best save for two minutes later, when he absolutely robbed the Mohawk player on an east-west pass on a backdoor play. Laurier added two more insurance goals giving them a good start to the tournament.

Brenner talked about settling down in the game after allowing the first goal. “It’s easier to get in the zone in the second period because they were coming on a little bit stronger and they come a lot faster and that allows you to get into it quicker,” he said.

In the second game of the tournament, Laurier was able to catch a break from the very start. An inadvertent horn sounded off, disallowing a goal that was scored by Sheridan. But Sheridan was able to get a goal back thanks to a tipped shot form the point. Laurier was able to respond quickly and get a goal right back. Laurier added another one to go up 2-1 after the first period. This was a very chippy game and the fast pace seemed to favor Laurier. Laurier had numerous chances on the power play but couldn’t capitalize on them. In the third period, Laurier added an insurance goal to give them a 3-1 lead.

Sheridan was able to respond, however, thanks to a five-on-three power play to cut the lead down to 3-2. The final minutes of the game were very tense due to a couple of penalties that were taken by Laurier.  The offensive talented Golden Hawks had to play good defense in the final two minutes in order to hold onto the win. They were able to win the defensive zone faceoff and clear the puck. Sheridan was able to get the puck into the Laurier zone, however Laurier was able to play swarming defense and they were able to hold on for the 3-2 win.

Michael Bondy was one of the defensemen on the ice for the final two minutes of the game and he talked about what had to be done in order to pull out a win. “The goal was to keep pucks away from the net and we had to be a little aggressive because we were short handed there,” he said.

Tension rose in the third period when Redeemer was able to add a goal early that cut the lead to 3-2. This forced Laurier to play on their heels for a majority of the third. Brenner was again able to keep Laurier in the game. Laurier was then able to add a late empty net goal and they won 4-2 to go to the finals.

The final game came against Humber College, and early on in the game Laurier was trapped in their own zone, leading to an opening goal by Humber. This was the first time Laurier was trailing in the tournament.

Laurier was able to respond fairly quickly and tie the game up at 1-1. Laurier added another goal in the game and gave them the lead for good. Laurier held on to lead and won the entire tournament.

The most dominant player for Laurier was clearly Michael Mazurek who scored 10 goals in the four games that were played. But all he thought about was getting the team the win. “Howe gave me the game puck after the second game, but I just threw the puck in the trash and told the team I’m not here for individual shit – I’m here for the team and I’ve told the guys that from day one,” Mazurek said after the game.

Captain Dave Howe talked about dealing with adversity early on in the final game. “Honestly, after that first goal, that lit a fire under us that we needed and honestly this was a big win for us.”

Laurier is already qualified for the Challenge Cup because they won the tournament last year, however this tournament gave the team some confidence and allowed them to connect as a team right before the biggest tournament of the year.