Who will you see this Halloween? 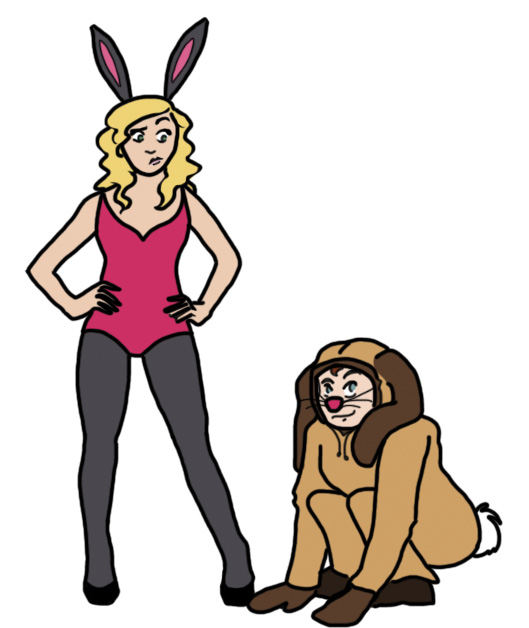 Halloween is quickly approaching and people are on the search for the perfect Halloween costume. Who will you see trick or treating this Halloween?

After Miley Cyrus’s shocking VMA performance of  her hit single We Can’t Stop, the world has yet to stop buzzing about her new style.The one piece bear costume Miley wore throughout her performance along with the famous foam finger is sure to be seen this Halloween. This look can be completed with a funky hair style of double top knots and red lipstick.

In addition, during Robin Thicke’s memorable VMA performance of Blurred Lines, Thicke was dressed like the character Beetlejuice. This look can be created with a black and white striped suit, aviator sunglasses, slicked back hair, and a gold necklace.

It is going to be a duck nation this Halloween. The last season of the television show Duck Dynasty shattered records due to the shows increasing popularity.  To dress up like a member of the Robertson family think ‘redneck chic’. Beards, bandanas, and camouflage are what this family is all about.

The Breaking Bad series finale aired at the end of September and it did not leave fans disappointed.  Walter White is likely to make an appearance this Halloween. The chemist will be wearing a yellow hazmat suit, a gas mask, and eye glasses OR a green button up long sleeve shirt tucked into a pair of tighty whities. This look can be completed with messy hair, eye glasses, socks, and suede shoes.

“Everybody wants a minion costume, that’s a big one,” Marcia Lucier, an employee from Brantford’s Halloween costume shop Spirit said. Would you not agree that the minions are adorable? The minion costume is popular for people of all ages. The costume can simply be created with a pair of jean overalls, a yellow shirt, and a pair of goggles.

1920’s characters from The Great Gatsby

People are going to be time travelling back to the roaring twenties Halloween night. Daisy Buchanan and Jay Gatsby have inspired elegant Halloween costumes. The Daisy Buchanan look can be recreated with a sequence dress, pearl necklaces, and a feathered headband. In addition, makeup should include smoky eyes and cherry lips along with a bob styled wig or a low bun for a twenties hairstyle. Jay Gatsby on the other hand can be created with a three-piece peak tuxedo, a white pocket square, a black bow tie, and black leather shoes.

May the odds be ever in your favour on Halloween night. Hunger Games fans have been patiently waiting for the release of the Hunger Games sequel Catching Fire. Hunger Games has interesting characters, one of the favourites being Katniss Everdeen. Katniss’ most recognizable outfit from the games can be recreated with a pair of cargo pants, a black V-neck t-shirt, leather boots, and a black jacket. Her hairstyle consists of a braid off to the side. In addition, accessories can include an orange knapsack, a bow and arrow (fake of course), and a golden pin along with a low side braid.

It has been a year of babies in the entertainment industry. The birth of Prince George was one of the most anticipated births this year. A royal baby costume will insist of tiaras, bibs, and soothers. Moreover, Kanye West and Kim Kardashian had a baby girl dubbed North West. Do you want to be North West for Halloween? Dress up in cotton luxury pink pajamas, a pink beanie, and pink shoes with a pacifier. Another option is simply a compass.

With movies like Iron Man and Man of Steel: Superman coming out this year, it is no surprise that super heroes are one of most predicted costumes of 2013. According to Lucier, superhero costumes are a popular choice at Spirit.

It is no surprise Miley Cyrus is one of the most predicted Halloween costumes of 2013. Girls seem to be buying very provocative Halloween costumes this year. Over the past couple of years, Miley’s style has changed dramatically compared to her Hannah Montana days. She is transitioning from an innocent girl to a woman who is not afraid to act sexy on stage.

Keep an eye out for these Halloween costumes this year, and let us see how accurate these predictions are.