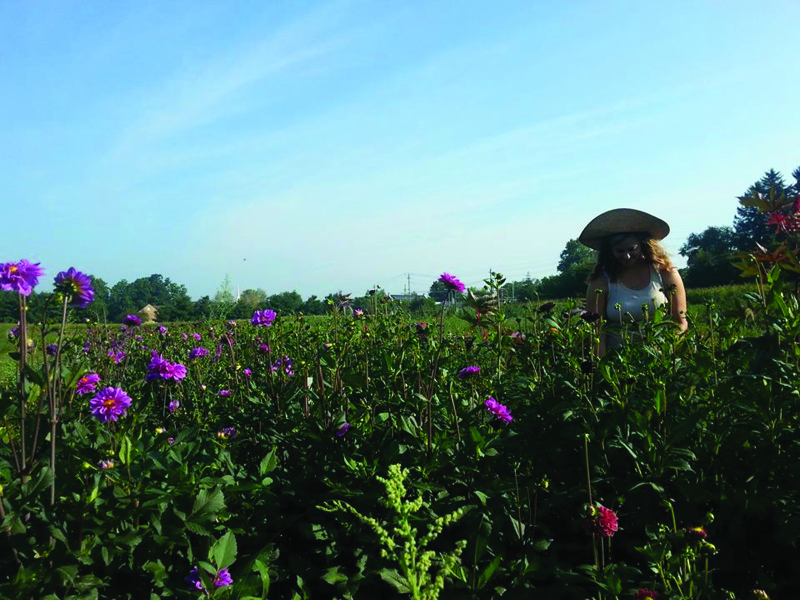 Between school, work, a social life and sleep, it’s hard for students to find that balance without wanting to rip out their hair. But somehow, Vandermaarl manages it and more. On top of being a fourth year student here on the Brantford campus, Vandermaarl is a farmer’s assistant, florist and cattle herder at La Primavera Farms – a neighbour’s farm, where she has been working since she was 14 years-old.

What makes Vandermaarl so different from other farm girls is the amount of work she puts into it. “What I think is really different is how diversified the farm is, there is a ton of different things that we do there that makes us really different from big, traditional agricultural businesses,” she said. Vandermaarl explained that La Primavera Farms provides layered hens, free-range eggs to local bakeries, organic beef, turkeys and cows. The farm grows flowers for local weddings, florists, and farmer’s markets.

The work for Vandermaal is very dependent on the season, with the spring and fall being her busiest seasons, and things finally slowing down by the first frost. “I started out as just a general farm hand and then the longer I had been there the more that had snowballed. I really do a lot of assisting and managing type work for my boss now,” said Vandermaal, even having the opportunity to run the farm for a week while her boss was away.

Vandermaal said she really thinks there is a benefit from shopping at a farmer’s market such as the ones her farm provides for. “Supporting local farmers and local agriculture, really seeing where your food comes from …. really fosters a connection with the place that you live in and with the people that you live in it with,” said Vandermaal. She further explains that it is a great way to build a community, know the people you live near, and indulge in buying great food and products. Vandermaal is excited and passionate to share what her farm does and why they do it.

Some of the issues with farmer’s markets is having to compete with other larger markets that do not have this local support Vandermaal stresses of importance. “A lot of people think they’re supporting local when they go to these big farmer’s markets, but they’re not necessarily. If they’re running year round they’re not going to be local. It’s not possible,” Vandermaal stated. Pricing always gets tricky when it comes to selling grown product because not a lot of people can see the value of the work behind it. When buying from local farmer’s markets, Vandermaal compared the pricing to be more expensive than big corporation stores but a whole lot cheaper than boutiques or speciality stores. Pricing is that way because they understand their value, but of course, “there are a few hagglers depending at the markets we sell at,” she explained.

Even recent Prime Minister Justin Trudeau has shown his support for local farming as he visited the Dundas Farmer’s Market while Vandermaal was selling flowers. “Despite his policies he has a very good taste in flowers,” she laughed.

With every job comes your high points, and your lows. “The highest point is when you have a customer who falls in love with something you made … it’s good to hear that someone appreciates the value. The lows is when it’s 40 degrees out, and you’re still not finished,” said Vandermaal. Yet, the high points are enough to keep Vandermaal loving and passionate about her work as a farmer girl.