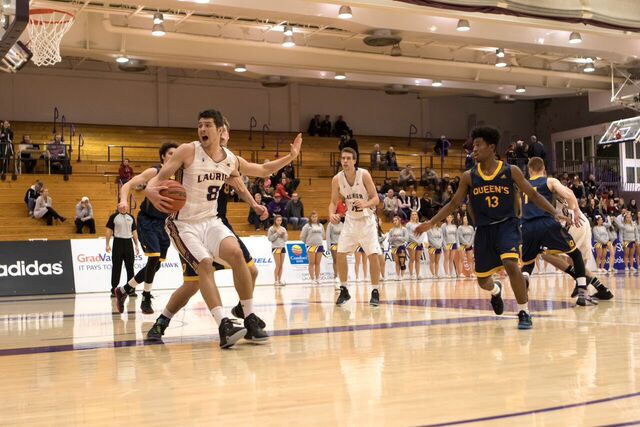 Laurier’s basketball and hockey teams are in the final stretch of the regular season and all are on pace to make the playoffs. Here’s a quick recap of every team’s season as they prepare for their final games.

The Basketball team has been a pleasant surprise so far this season tied for second in their division with a 6-7 record. With seven games remaining in the season, the Golden Hawks are on pace to do better than their seven to 13 record from last season. Will Coulthard has provided a veteran presence as the senior leader averaging 20.1 points per game, the sixth best in the OUA. Freshman sensation Simon Mikre has shown no nerves as the main distributor averaging a team high 4.5 assists per game. An injury to the team’s second leading scorer, Luke Allin, was concerning at the time, but Matt Chesson stepped up in his place. Chesson has averaged 16.8 points per game with Allin injured, compared to just over 10 before. Laurier would be the 11th seed if the playoffs started today, but over their final seven games they will play against five potential playoff teams. This stretch includes games against the top three teams in the CIS rankings Ryerson, UOttawa and Carleton. The stretch run will either be a rude awakening for the team or a chance to climb in the RPI standings that determine playoff seeding.

The women’s basketball team is on pace to reach the playoffs again. The team is not as strong as last year’s that finished 17-3 and earned the two seed for the playoffs. A record of 6-7 may be disappointing to some but once the playoffs start, the single elimination format can lead to some upsets. The Golden Hawks third in their division and would be the 11th seed if the playoffs started today. The team has had some bright spots still this season with a few players. The star for Laurier this season has been junior Nicole Morrison. Morrison is fifth in the OUA averaging 15.8 points per game. She has been consistent in her scoring, having scored in double digits every game so far this season. Morrison is also helping spread the ball around with a team high 2.8 assist per game. The strength for Laurier has been limiting their opponents’ ability to shoot threes allowing the fourth lowest percentage in the OUA. If Laurier can keep that up, it should allow them to stay close late into games, giving Morrison the chance to give Laurier an upset win in the playoffs.

After two disappointing seasons of not making the playoffs, Laurier has climbed up the standing this year and is currently in sixth place in their division with a 12-11 record. The Golden Hawks’ strength has been on the defensive side and in net. Laurier has the fourth highest team save percentage in OUA at .918, helping keep their goals against average low at 2.97, the eighth best mark in the conference. Laurier’s goaltending duties have been split between two equally talented goalies. Sophomore Colin Furlong has started 13 games so far this season with a GAA of 2.82 and a SV per cent of .921. Furlong has split time in net with junior Vinny Merante who has posted a GAA of 2.95 and SV per cent of .919 in nine starts this season. Laurier has had a balanced approach on offence with 11 players collecting at least 10 points. Derek Schoenmakers has led the way for Laurier with 13 goals and 20 points which are both a team high. A balanced offence and solid goaltending could make Laurier a tough out once the playoffs start in mid-February.

After years of success, the women’s hockey team is fighting for a playoff spot with a 10-7-1-1 to place them sixth in the conference with the top eight making the playoffs. Laurier recently changed starting goalies with Amanda Smith starting four of the last five after Lauren Webber started 13 of the first 14 games. Smith has played outstanding since taking over for the freshman. In her four starts, the junior has only allowed two goals and won all four games, including an upset over second-placed Nipissing and third-placed Waterloo. On offence senior forward, Jessica Hurrell is leading the team with 17 points. Freshman Madison MacCulloch has gotten used to OUA play and has totaled eight points in her last 10 games. With five games left in the season Laurier is still fighting to try and secure home ice advantage for the playoffs.