The moment the media turns to the meme 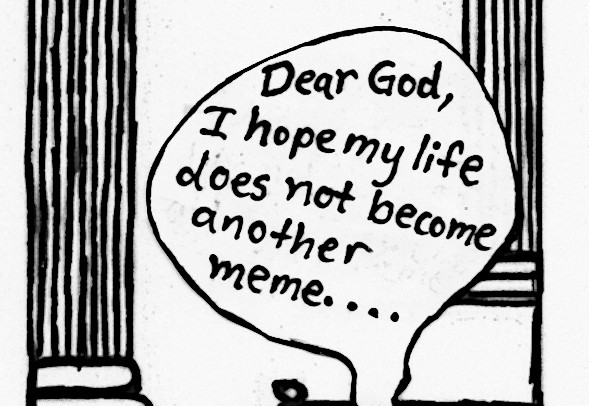 The Internet is a wonderful place. It has a wide variety of knowledge and things to occupy yourself with. When you get many people in one place, they create inside jokes among themselves. The Internet is no exception to this rule, (in fact, it has many rules, look them up if you have a strong stomach). “Memes” are the Internet’s inside jokes – people outside looking in don’t get it, and the people from inside looking out don’t get why everyone doesn’t get it. Now I can’t go into every meme on the Internet in detail, as that would produce a much longer article and half the fun is learning each meme as you go along.

What is so interesting is that every day, memes are created and memes die, and the Internet goes on. If someone uses a meme that has died, it will usually be taken down, or voted out of existence. Memes can only be resurrected if there is a large influx of new posters, which happens very rarely. Some memes are immortal and loved by all (Success Kid, Insanity Wolf, Socially Awkward Penguin), while others are often forgotten (In Soviet Russia, Drop The Bass).

Memes on the whole don’t have a very long lifespan, however. Lately, memes that have “broken the Internet” (a media coined term I assure you) have had a very short lifespan – shorter than the average meme. For example, Kim Kardashian’s pictures that were meant to break the Internet had a very short lifespan, but it was still prominent in many reaches of the Internet. In a very similar stream is the American Sniper baby, the whole video business with Stephen Colbert, Steve Carell and John Stewart, and of course most recently The Dress.

“You can leave that image with someone, and come back to it in 10 or 20 years, and find there are some things you just can’t unsee. You can tell a story with it. For me right now I have small kids, so any photos of children being abused or exploited really sticks with me.” says Duncan Finnigan, a Digital Arts teacher at Laurier Brantford. “I don’t really know about [memes]…usually you look at subtext, but that’s really straightforward text, so it’s just a joke or whatever it may be.”

For those who are wondering, the colour of the dress looks different due to the way the light enters your eyes. Your brain actively filters out colors and tweaks your eyes to adjust. Your eyes and brain focus less on the light itself, and extract more information on the thing the light is reflecting off of. It is what you are focusing on at that time that differentiates the colour of the dress. That’s where I’m leaving that.

These memes, that burn out as quickly as they pop up, I like to call them “supernovas”. They burn brightly for a very short time, then ultimately disappear forever. The reason these supernovas burn out so quickly? They are forced, fabricated memes and therefore fail right out of the gate. As the media gains more and more understanding of the Internet, they will try to use it to their advantage, but they do not grasp the full nature of the Internet. Whenever someone attempts to fabricate a meme to “break the internet” it will fail. The mass media is essentially that kid who comes in late to the group and tries to fit in with all of the inside jokes they weren’t there for. Not really harming anyone, but not leaving it alone and paving their own path – their own inside jokes.

Mass media tries to take memes and use them in advertising, to try and connect with us on a fundamental level. As almost to say “We’re one of you”, they use success kid to promote a phone, and grumpy cat to promote products. The worst part is that often times the advertisers will not do their research and use the meme wrong, therefore sucking all of the humour out of it. Once in a blue moon an advertiser will do what feels natural to them and will spawn a meme. For example, the original Old Spice man turned into a meme, not a supernova. The Old Spice man was an excellent meme until Old Spice tried to get into the joke and brought along Terry Crews, or unveiled the “my boy smells like a man” advertising line.

The Internet is a living, breathing thing. It is made up of dedicated users and without them it would crumble. It cannot be restrained, not by a bill, not by a company, not by a single person. What the Internet wants, it does, and it cannot be forced to do anything else. Now, the mass media does have its place in the Internet, it just has to find it, and stop forcing it. Good things come to those who let it happen. If only the media could be this patient.