The lowdown on a cheap high 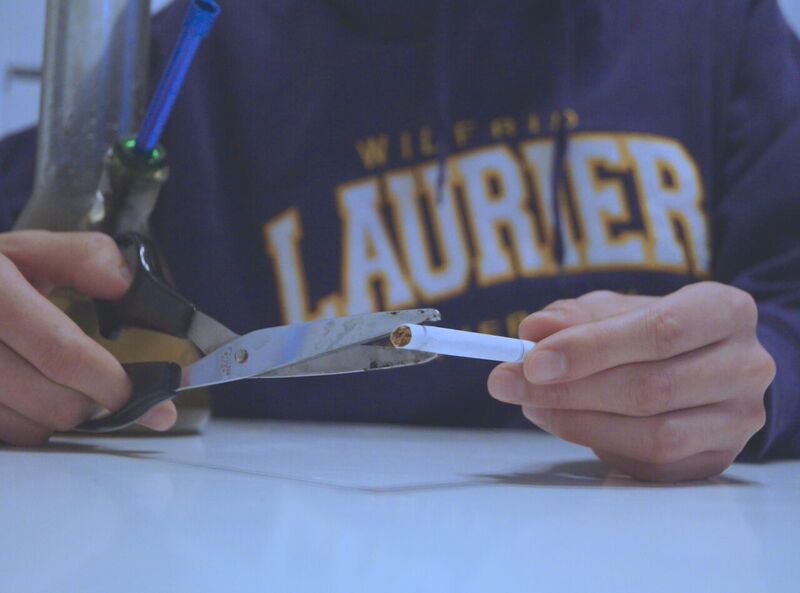 All names have been changed to protect the privacy of those portrayed within the article. The Sputnik does not endorse nor condone the use of illegal drugs.

Anticipation leaves your stomach churning as you pull a cigarette out of a fresh pack; the foreign scent of raisins wafts faintly from the open deck. In front of you lays a small pile of freshly ground weed. It’s a five chip, at best, but it’s more than enough.

It’s your turn in the rotation. You rip the tip of the cigarette and shove it snuggly into the piece. You stamp the piece into the pile slowly but firmly, to make sure that it doesn’t snap too quickly.

Your friend passes the bong with his left hand, which you happily accept. With shaking hands you place the piece into the bong. After a few deep breaths you a ready; three, two, one. It begins.

As you spark the lighter and begin to slowly inhale, you can hear the bubbles bounce off the walls of the chamber. The smoke is now slowly rising into your mouth; the taste of tobacco begins to overwhelm your tongue. The weed is now cherried and it’s almost time to snap it. With one final gasp of breath, the piece is cleared.

You exhale a thick cloud of light grey smoke, which was smoother than it should have been. Your head is now buzzing and you feel tingling in your spine and neck. In a breathless state you lay back in your seat and close your eyes. You’ve just smoked a popper; it isn’t your first, and it isn’t your last.

Poppers are a popular yet unhealthy method that people all across Ontario use to get high. The origins of the popper are relatively unknown, but they seem to have popped up in Ontario within the last few decades. They are attractive to teenagers and students due to their bang for their buck; they require little weed and can give a tremendous high. However, this high comes at a higher price.

Laurier Brantford student Tony, smoked poppers for about a year and a half, and started mainly because of the head rush that comes with poppers but also because it saves money and weed. Before coming to Laurier Brantford, Tony had never heard of poppers, “I hadn’t heard of them back in Saskatchewan.” However, Tony quit smoking them after he started “spitting out gross phlegm in the morning.” “ It was like black tar, it’s disgusting,” stated Tony.

Tony found it easy to quit, however, not everyone felt the same way. Laurier Brantford student Sam had to quit due to physical withdrawals. Sam got into poppers through her friends in residence and was “hooked after the first one”.

“It was very difficult to quit because I had physical withdrawal symptoms such as extreme nausea and vomiting” stated Sam, who smoked poppers for about two years. “If I didn’t smoke every morning and every few hours after that, I would vomit. It was extremely unpleasant.”

Physical repercussions like coughing up phlegm and vomiting can scare students into quitting, however, it’s not the only outcome. Laurier Brantford student Emily loved smoking poppers. “ I love the whole process of packing a popper, getting that head rush. Literally everything about it.” Yet, Emily forced herself to go cold turkey after smoking approximately 20 to 30 poppers a day for about three years.

“It was extremely hard to quit because weed was my security blanket. Any problem I had would be solved with smoking, any emotion would be controlled with smoking so I ended up having massive panic attacks. I couldn’t eat for a week and went to the hospital because I was throwing up every morning and laying on the bathroom floor crying for hours. I couldn’t sleep or anything but just feel scared. I literally had a mental breakdown,” stated Emily.

Laurier Brantford student Wade has been smoking poppers for four years. He tried it with his friends back in highschool and the head rush got him “hooked instantly”. Wade stated it was “unlike anything I had felt from straight weed before.”

What is it that makes poppers so addicting? All of those who were interviewed felt that the headrush is the most addictive part of smoking poppers.

Spencer is a Laurier Brantford student who has smoked poppers on and off for about four years. He will still “occasionally indulge if the opportunity presents itself” and feels poppers are so addicting because of the tobacco related side effects and the relaxed state it puts you in.

Curiosity takes over when it comes to poppers; wanting to experience is rush is the main factor. Wade tried poppers out of curiosity and Emily smoked her first popper with her high school best friend because “we just liked to try everything.”

3 thoughts on “The lowdown on a cheap high”