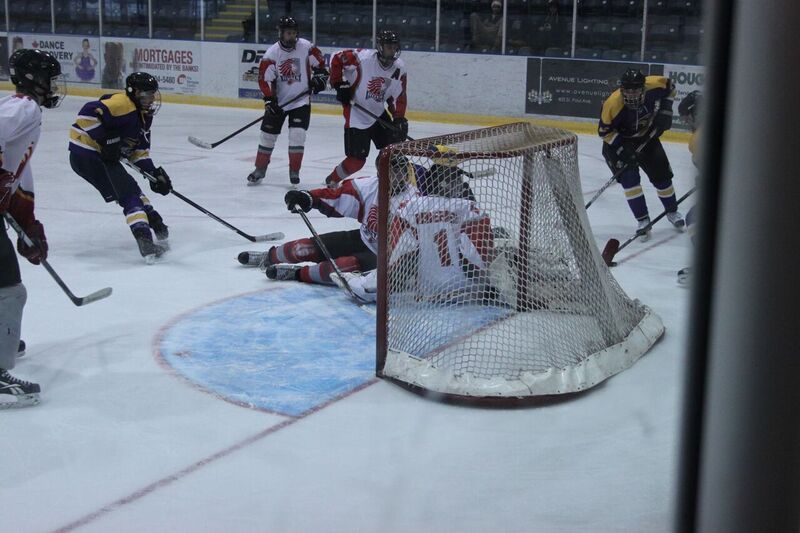 Laurier Brantford men’s extramural hockey team finished their season with their best finish of the year while playing on home ice.

The team struggled in their semi-final game losing to Redeemer 4-0. The game was more competitive than the scoreboard showed. Laurier kept it tied until halfway through the second period before Redeemer scored two quick goals in 38 seconds, to take control. Redeemer scored on the power play early in the third to put an unofficial end to Laurier’s season.

Laurier had a chance at the start of the game to build some momentum near the end of the first period with a four-minute, man advantage. Laurier failed to take advantage as their power play continued to struggle. Laurier ended the tournament failing to score on their 10 power plays. Failing to score against Redeemer was nothing to be embarrassed about, as it was Redeemer’s third consecutive shutout of the tournament.

To reach the semi-finals, Laurier finished second in their five-team pool after an upset win over Fanshawe, a team that has given Laurier struggles in the past. In a penalty-filled game, Laurier was able to hold on for a 2-0 win. The teams combined for 56 penalty minutes in total including a game misconduct for a Fanshawe forward as well as the Fanshawe coach receiving a penalty for delay of game after arguing calls.

Laurier managed to get on the board early, before the game got physical when Tyler Jones scored a shorthanded goal halfway through the first. Jones scored after Mitch Smyth made a play to create a two-on-one break before making the pass to Jones. Early in the final period, Brian Holland let go a shot that would find a way to roll in to give Laurier a 2-0 lead. Golden Hawks goalie Ben Brenner wouldn’t need any more support as he made some key saves late to secure the shutout.

The win was important for the team according to assistant captain Mike Bondy, “Fanshawe’s been kind of a team that we’ve always struggled with… that was a huge morale victory for all of us and we came out flying that third game because of that.”

The tournament did not get off to a positive start for the Golden Hawks, who opened with a game against McMaster. After a goal in the first Laurier’s captain, Kevin Lamplugh, had a chance to tie the game, but couldn’t finish. After a second goal, Tommy Kudoba attempted to reply off the faceoff, but his shot hit the post as Laurier continued to trail. A goal from Bradley Stitt with seven minutes left in the game closed the gap to one. A late rush by Jones came close, but Laurier couldn’t get the equalizer before an empty netter resulted in a 3-1 final.

Laurier had to face the challenge of finding success without a coach, which lead to the senior leaders of the team taking more control. “It ran as smooth as it could and we have to give credit to the [team] for that because they made our job really easy, without a coach it’s really easy to disrespect the process but we stuck to the game plan and they believed in us,” said Lamplugh on how the team dealt with the challenge.

Laurier will not qualify for the Challenge Cup at the end of the season, meaning that the team has played their last game of the season on home ice.