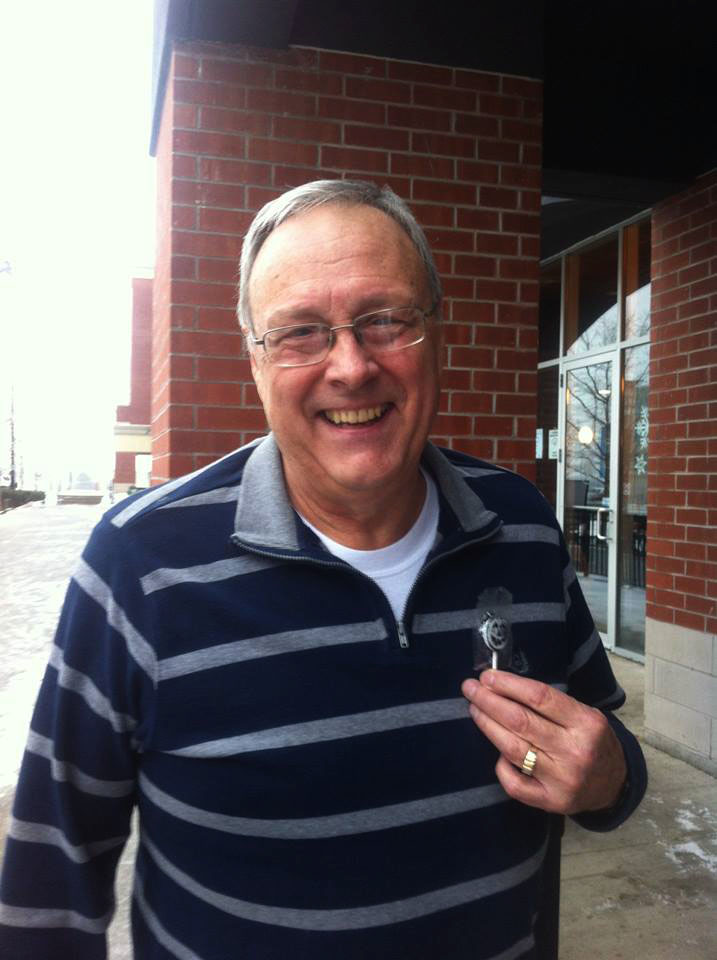 Teaching the French language may not seem like the best way to inspire generations, but Bob Howard does just that. Howard, 71, does not just teach how to conjugate verbs, he changes lives.

Howard has been a French conversational teacher at Laurier Brantford for five years, but a French teacher for 51. In fact, he taught French in elementary schools in 1964, before French was even part of the public school curriculum.

From the beginning of his teaching career, he realized that he needed to make students value their time with him which would then make them value the course content. To do that, Howard uses unique tactics to make his students enjoy their class and reflect on their lives.

Each class, he gives out the Passionate Cookie Award – he gives a chocolate chip cookie with an icing smile on it to the student who has the winning smile that day.

“All winners have to stand in front of the class, with their cookie, smile, and say [I feel good and it shows].” Howard says this lesson is important to keep in mind for professional reasons.

“You can be the brightest light on the tree but if you are not plugged in, you are not going to shine,” he said. “In other words, you have to show it in an interview.”

He also gives out lollipops that put smiley imprints on your tongue – students stick out their tongue and laugh while doing this, to show that you shouldn’t take yourself too seriously.

Although some may say these games seem silly, especially for university-aged students, Howard says they are “games with purpose”. At the end of the day, students do not remember the passé composé of irregular verbs, they remember how they feel and the lessons they learned.

Howard says his passion in life is to inspire people, to light fires in students. His hero is the lamplighter, the character from the famous book Le Petit Prince.

“When you light a fire, you have no idea how long it will burn,” he said. To show his students how important it is to find their own passions in life, he turns off the lights in his classroom and physically lights a candle. He wants them to know that they will one day discover their passion in life.

“You plant the seed and it will grow.”

Howard ensures that he takes his own advice and lives each day how he wants his students to. He plans how to use all 1440 minutes of the day effectively, he does not judge people and he does something every day that scares him.

Laurier alumni Amanda Pemberton, 24, knows firsthand how inspirational Howard can be. Pemberton graduated from the concurrent education program in 2013 and is now a Grade 3/4 teacher.

“I may have graduated, but I am, still to this day, a Bob Howard student – I can always go to him in times of need,” she said. “Bob continues to check in on me, sees how things are going, but most importantly, he continues to inspire me.”

Howard says he aims to not be a crutch for his students but instead a bridge.

“There’s an old saying in education that teachers are like bridges that students pass over and then burn,” he said. “I want to be that … When you burn the bridge is up to you.”

Pemberton aims to enter her classroom every day with a smile just like Howard modelled for her.

“Such positivity and excitement shown by the classroom teacher in turn generates the same feelings within your students,” she said.

Over the years, Howard has received countless cards and words of thanks from his students. He values these tokens of appreciation not because of the compliments but because they illustrate he is achieving his goals in life.

Pemberton offers her own words of thanks to her teacher and role model. “Monsieur Howard… Thank you for believing in me, even when there were times when I stopped believing in myself. You never gave up on me.”

Outside of teaching, Howard has been a basketball coach, husband and father of three. His daughter, Julie, was an Olympic swimmer at the young age of 15.

Howard has recently officially retired from being a supply teacher. Also, this semester may be the last for Howard at Laurier Brantford as he is unsure of the demand for his classes now that the Nipissing concurrent education program is no longer accepting new students. Even though Howard’s teaching career may be drawing to a close, the ripple effects of the estimated 6,800 students he has influenced over the years will continue to make waves in people’s lives.

16 thoughts on “The Laurier French teacher who lights fires”