The end of a beautiful friendship: More than “just a dog” 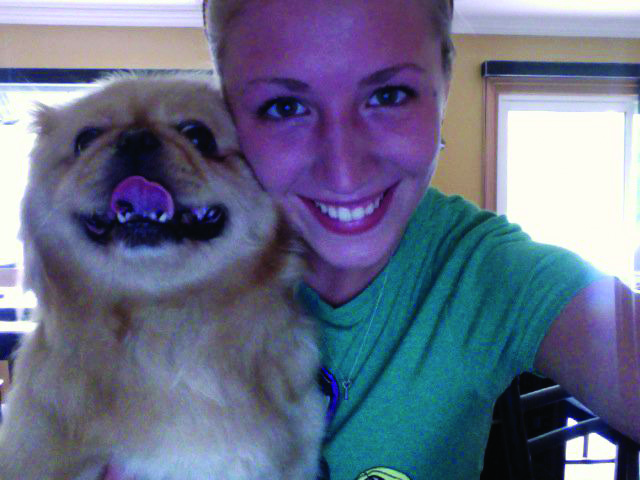 I realized what had happened seconds after I asked those few words, “How’s my boo-boo?” People say when tragic things happen, their heart stops, or drops or whatever, but that was not the case. Instantly there was silence from my parents, then soft humming sounds as they could not find the words. My heart seemed to rise rather than drop, into my ear drums of all places. All I could hear was a, “thump, thump, thump,” getting louder and faster with the seconds. The emotion drained from my body as I pleaded, “What guys? Seriously, what?!” Mom said, “Let’s pull over.”

For the past week, I had been at a journalism conference in Edmonton and was currently getting picked up from the airport. Dad took my suitcase and put it in the trunk, and as I hopped in the back seat eager to tell them all about my trip, I noticed the large stuffed dog in the seat beside me. I shrugged it off, thinking it had to be for one of my little cousins or something. I later found out it was for me, and something about donating others to the Humane Society on Cotton’s behalf, but everything had turned into static at that point so it is all very unclear what was actually said.

As dad pulled the truck over, I began the denial phase. I just kept thinking, oh they are pulling a good one, trying to make me squirm, very funny guys. Dad took a deep breath before saying, “She’s not doing well.” Things felt as if I was in a dream: time stretched, sounds were muffled and deeper than usual, and I just could not believe any of this was actually happening. Once again, I went for the false hope in the sentence and thought, she is still alive, he said ‘she’s’ as in ‘she is’, that is present tense, she is still alive. But I forgot my dad is not too great with grammar, and he was trying to say this in the most delicate way possible.

He explained the days starting from when I had asked about her on Wednesday. Everything had spiraled down from there. They took her to the vet Friday to find out that her lungs had already filled up with fluid due to a viral infection. Putting her down was the only option. Mom sat silently while dad went on. I am not too sure if she was already crying at that point, but she definitely joined me in crying the rest of the ride home. I was also at a loss for words, and I could not spit out a damn sentence for what felt like forever. They did not want to ruin my trip, but they also did not want to make that decision for me. They chose to wait it out, and scheduled to put her down Monday so I could say my good-byes and make the final call. She did not make it to Monday.

We got Cotton when I was eight years old, from my Uncle Ford. I got to watch her grow from the first week she was born, and picked her because she came to me the day we went to choose one of them. She was one of a pair of twins, pure bread Pekingese. My mom thought of the name Cotton because she was just a handful of puffy white fur at that point. When we drove her home, she climbed up my body and wrestled into my hair around my neck, where she stayed the whole ride, quivering with fear.

What a little bundle of attitude she was, just like her mommy. It is crazy how some dogs turn out to be so much like their owners. I remember the first day I put her on a leash, and plopped her down on the sidewalk in front of our old house. She looked at me like I was an idiot. Did not move an inch. After a few more tries, she began to fight the leash by biting at it furiously.

Cotton trained very quickly, the smartest dog I had ever met. She only made a mess in the house a handful of times, and was such a good girl. She always listened to me, and only began to have selective hearing when she got older, but I think she was just using it to her advantage, the sneaky little doggy. I could never stay mad at her for longer than 30 seconds. As soon as I would try scolding her she would oh so slowly creep up to me with those big puppy dog eyes staring up at me, and then oh so slowly reach her one paw out to me and gently scratch at my leg. Then I would melt, apologize and hug and kiss her.

I have always had troubles confiding in people. Just too afraid they will leave me I guess, that they would take a piece of me away while stranding me to suffer with my deepest darkest secrets. But my boo-boo, well she would never leave me, I had thought. She knew every little detail about my life, and the funny part is, she would actually sit there and listen the whole time. When I cried, she kissed my tears away. Not too sure if she just liked the salty taste, or she knew what was really going on, either way it always made me laugh. She was the only thing in my life that would make the pain go away, not distract it or camouflage it, it would literally disappear with her kisses.

Every time I left home, I kissed her good-bye, and every time I came home she greeted me with happy whimpers and kisses as well. There was never a day that I did not instantly get happier at the sight of her smile. Yes, she actually smiled, her “smushed” little face shined a wide grin while her curled tongue panted out to show her cute black birth mark peeking from the bottom.

I noticed something about her was off the week before I had left, I was so scared I cried all night and barely slept a wink on the floor beside her. I called the vet the minute they opened the next morning, and got her in a couple hours later. She had an ear infection, and all her other symptoms seemed to have been caused by the pain of that. We had no idea something much worse was going on.

The thought did cross my mind, that maybe I should not go to the conference and stay with my boo-boo. It seemed like a silly idea at the time, throwing away a once in a life time opportunity because your dog is sick. The conference was amazing, I learnt and gained so much from it, and I am honoured that I was chosen to go. But I cannot lie, there will not be a day that goes by where I will not regret that choice and wish that I stayed with my baby girl. I would do anything to go back in time, to be there, to have taken her to the vet Friday and said my good-byes so she did not have to suffer any longer. Just to hold her in my arms one more time, to thank her for all that she had helped me through, I would do anything for that.

Some may think I am pathetic, some may know exactly how I feel right now. It does not matter; all I know is that Cotton was my everything. She helped me in ways no human ever could. And for that, she deserves the recognition of an audience, for being the best friend anyone could ever have asked for.