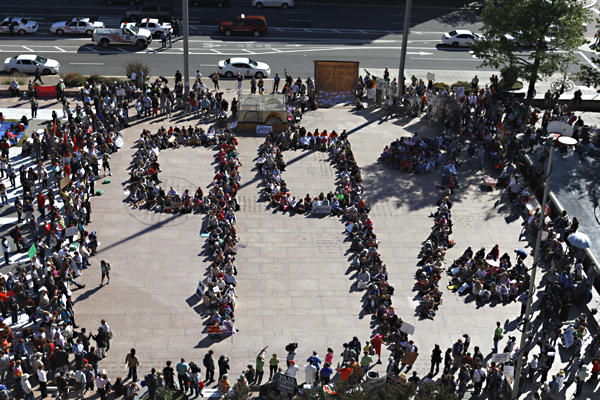 Thousands of protestors have descended on Wall Street in downtown New York City over the past three weeks, creating one of the largest revolutions in America in recent memory. The leaderless movement, called Occupy Wall Street, have no set demands but are protesting economic issues such as corporate greed, the influence of money over government officials, and the imbalanced distribution of wealth in America. The original idea behind the protest came from the Canadian group Adbusters, though they have no direct role in the protests.
New York police officers have had a hard time dealing with th protestors.
Over the first few days of the protest, numerous arrests were made. Most arrests were for obstructing traffic though some protestors were charged with disrupting the peace and resisting arrest. On Oct 1, protestors set out to cross the Brooklyn Bridge. After they were on the bridge, police arrested 700 people for disrupting traffic, sparking even more outrage as protestors alleged the police forced them onto the streets.
The police used busses to clear the protestors from the bridge, and were later sued by the drivers for comandeering city busses. Later, the New York City Transit Union offered solidarity with the protestors, and no longer will use city busses to transport detained protestors.
Some people have critisized the protests for being unorganized and lacking cohesion though others point out that many social movements and revolutions started out in a similar fashion. Regardless of any individuals personal opinion, there is no denying that the protest is happening and the scent of revolution appears to be in the air. Many are comparing this movment to that of the Republican-sided tea partiers, which is similar in form but has a radically different impact and focus.
The protestors are no longer on Wall Street but based at the nearby Zuccotti Park. Several hundred protestors have been sleeping at the park each night where, among other things, protestors have set up a media station consisting of wireless routers and laptops powered by a generator. During the day numbers swell. The largest number of protestors yet was during a march on Oct. 6 which saw over 15, 000 protestors march through lower Manhattan.
Political response to the protests has been mixed. Republican candidates have been largely disissive and critical of the movment while Democrats have generally been supportive. With President Obama stating that, “I think it expresses the frustrations the American people feel.” In addition to politicians many labour unions have begun to show thier support for the movment. On Oct 5 ,representatives from over fourteen of America’s largest unions attended the protests to show thier support.
Since the protests began, the word has spread across the country and indeed the world. Similar protests have begun to pop up in dozens of cities across the states as well as internationally. The movement is expected to reach Ontario this Saturday, when similar movements have been organized for both Ottawa and Toronto.