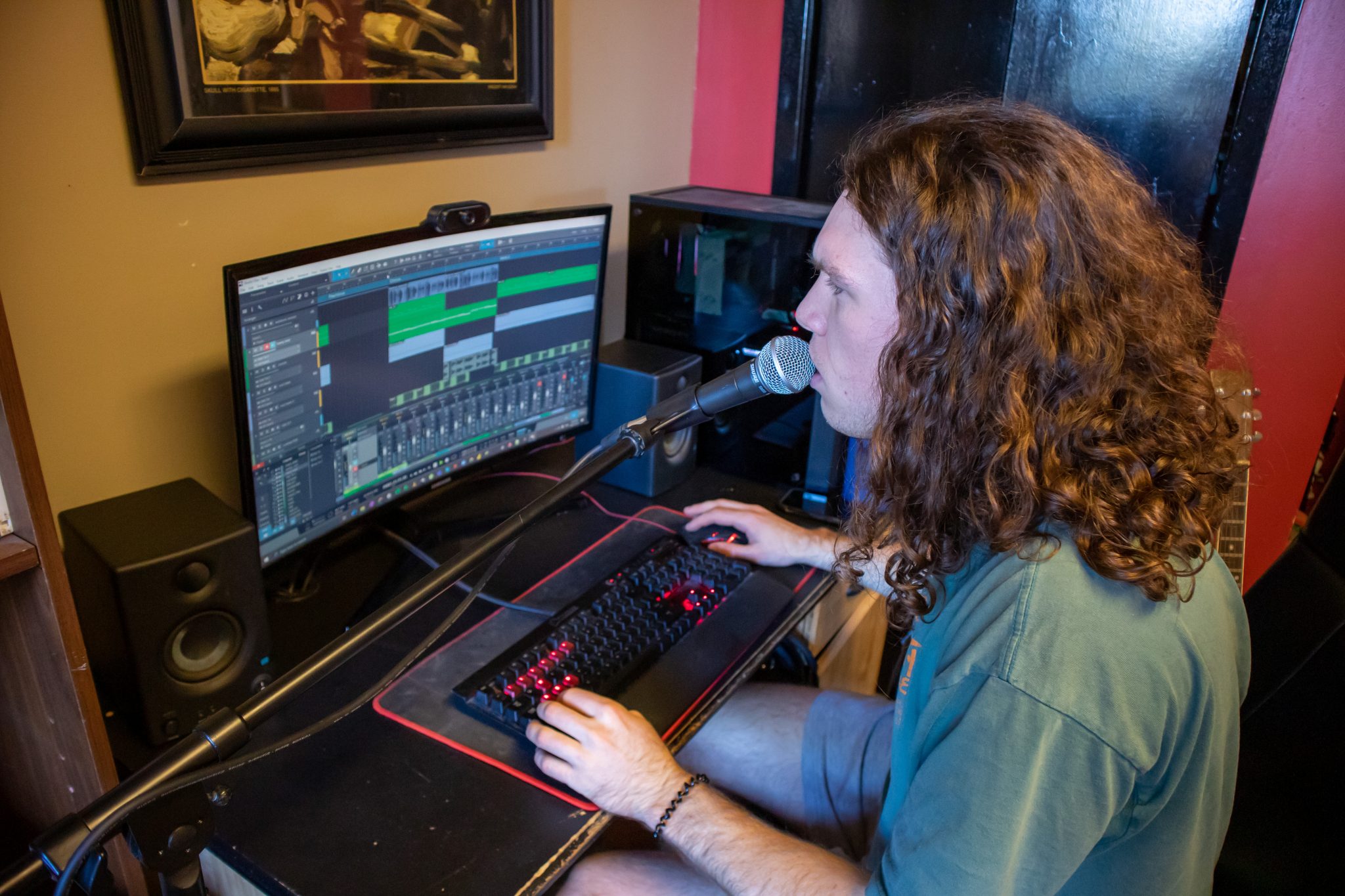 Evan Vandenberg, a fourth-year business technology management student and co-president of the BTM Students’ Association, stays busy with his studies and other business-related activities. Breaking the mould of the typical finance bro stereotype often attached to dudes studying business, Vandenberg is quite the artistic type. He is a singer, songwriter, producer and multi-instrumentalist from Paris, Ont., who is equally devoted to his music as he is to his studies. I sat down with Vandenberg in his room, which doubles as his makeshift studio, and we discussed his band, his art and the unusual upbringing that ingrained a life of musical experimentation within him.

Vandenberg started singing around age 6, his first official outlet for music in a public context.

“We traveled around the continent to places where my father would speak and we’d play music as a family in support of his events,” said Vandenberg. “By the time I could sing, I was on a stage beside my older sister. My entire family has always been really musical,” he said. “My mom’s parents were a singing family group and they even put out records, so it’s just been passed down.”

As he grew older, Vandenberg’s musical repertoire grew alongside him.

“We were all taught piano from a young age, but I really started getting into the drums when I was 11,” he said.  “As my brother was getting ready to go off to college, they needed me to be taught drums so I could take his spot. That’s when I really became integral to the family band.”

Then, he dabbled in musical production and other instruments like guitar in his teenage years. These days when they perform, Vandenberg is either on drums or bass, he said.

Vandenberg’s older brother, Garrett, is the frontman of their duo, sometimes trio, and the band frequently plays live shows for which they get paid legitimate Canadian dollars — something I find to be endlessly cool because I don’t have a single creative skill anyone in their right mind would pay for.

Vandenberg is much more modest about the nature of most of these performances though, feeling more like a background fixture than a main event.

“We played a pretty significant gig in Harmony Square back in August,” said Vandenberg. “A lot of people from Brantford came out and they didn’t even know who we were.”

They were coming out specifically for the concert, as opposed to what they’d been doing before, playing in restaurants and bars where the music is just in the background. “That was a cool switch-up,” he said.

Many of the band’s gigs are played during the summer, which can pose an issue for Vandenberg since the BTM program has a demanding schedule that goes right through the summertime.

“I’ve had some tricky times with that because there would be some shows or rehearsals that would fall particularly close to an exam or when an assignment was due,” he said. “In those cases, sometimes I’d have to temporarily put school on the back-burner because with a show, you don’t want people to publicly think you suck.”

Given Vandenberg’s commitment to musical excellence, in which he is prepared to put performances before exam preparation, one might wonder why he didn’t pursue music as his main career path. Playing music with his brother is a significant part of Vandenberg’s life, so it was important to him to continue doing it however I could.

“Some people would pursue it full-time, but I didn’t feel I had the innate drive to manage it as a career. I felt that if I loved it enough, I’d always be able to make time for it, and I have,” he said. “It would have sucked to give up university or music, so I’m glad it didn’t come to that.”

I have been fortunate enough to watch Vandenberg both make music and perform live shows on numerous occasions. I have always wondered if there is one musical outlet that he prefers over the other.

While he doesn’t think he could say one is better than the other, he’s always striving to do better in both. ” There’s a constant pursuit of improvement in art,” he said.

“I like the tangible aspect of making music; I can play it over and over again. On the other hand, playing shows is all about the experience,” said Vandenberg. Many of his fondest memories in music are the shenanigans that have gone down with his brother and bandmate around the shows.

Vandenberg’s older brother seems to be a recurring theme throughout the BTM student’s artistic journey and he confirms my suspicions by naming Garrett as his biggest musical inspiration thus far.

“He’s always been teaching me. I’ve always shown him the pieces that I’m working on and he’s always known more about music than I do,” said Vandenberg. “He’s made a name for himself and has made a career out of music, which has always been really admirable to me. That’s difficult and requires a lot of drive.”

While his brother is still a major guiding light, Vandenberg is beginning to make a sound for himself in the new music he is producing in the vein of The Strokes, The War on Drugs and H.E.R.

“They’ve got some great guitar riffs and I wanted to try to emulate that with my new stuff,” he said.

Beyond these sonic shifts, Vandenberg is really beginning to dabble in personal lyric writing as well.

“I feel like most of the stuff I’ve made throughout my life has been more just interesting ideas that don’t really get fleshed out,” he said. “But as I get older, I have more meaningful experiences and can try to find a way to describe that musically, so I’ve been doing that more lately.”

To close out our interview, I asked Vandenberg the two questions I’d like to ask every fellow creative I know, since I have this fundamental belief that everyone else on the planet holds a deep esoteric knowledge that I am the singular non-beneficiary of. The remainder of our conversation was as follows:

I asked him, “When do you feel most creative?”

“I guess the classic response would be when something significant happens in your life to make you feel something strongly and the outlet for those emotions would be the music. And the stronger the emotion, the stronger the expression that can come across in the music,” he said. “So, I just try to go out and live my life and let the good and the bad happen as they happen.”

Then, I asked, “How do you know when something you’ve been working on is finally finished?”

Well, the whole thing I’ve mentioned earlier is that “everything I’ve created up until this point wasn’t exactly what I wanted once I’d heard it a few times,” he said. “I’m always thinking, ‘I’d like for that to have been a bit different.’ There’s the never-ending cycle of being unsatisfied.”

Most things in art combine intuition and feeling, said Vandenberg, and he likes to rely on his brother and friends for feedback. Many of his songs never make it past private on SoundCloud, he said, “there might always be something to nitpick, but at some point, I just feel confident that I can lock it away and move onto the next thing.”